September delivered temperatures that were mostly above average, in some areas by 3 degrees or more, though there were pockets in the western part of Nebraska that were below normal. Above-average precipitation hindered farmers' efforts to get crops out of the field, but reduced drought in areas of the state. Learn more about how the state's climate affected Nebraskans in this month's edition of the Climate Update from the Nebraska State Climate Office. 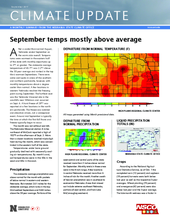