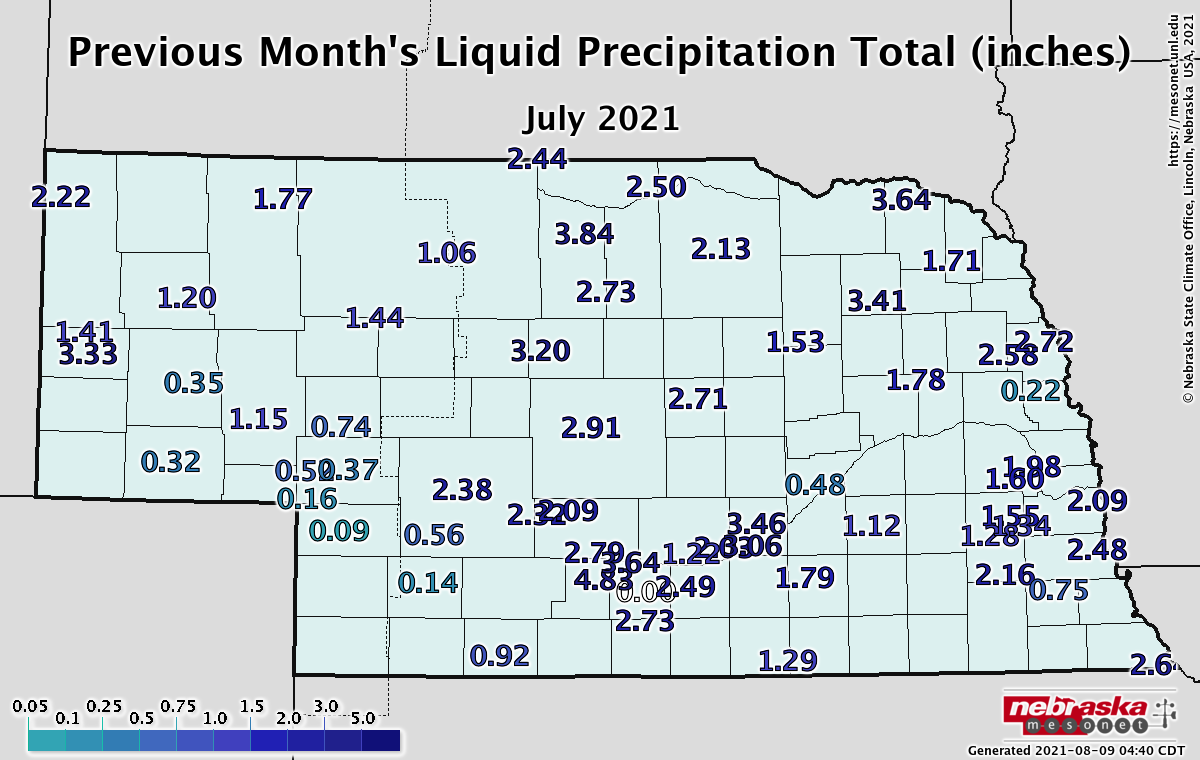 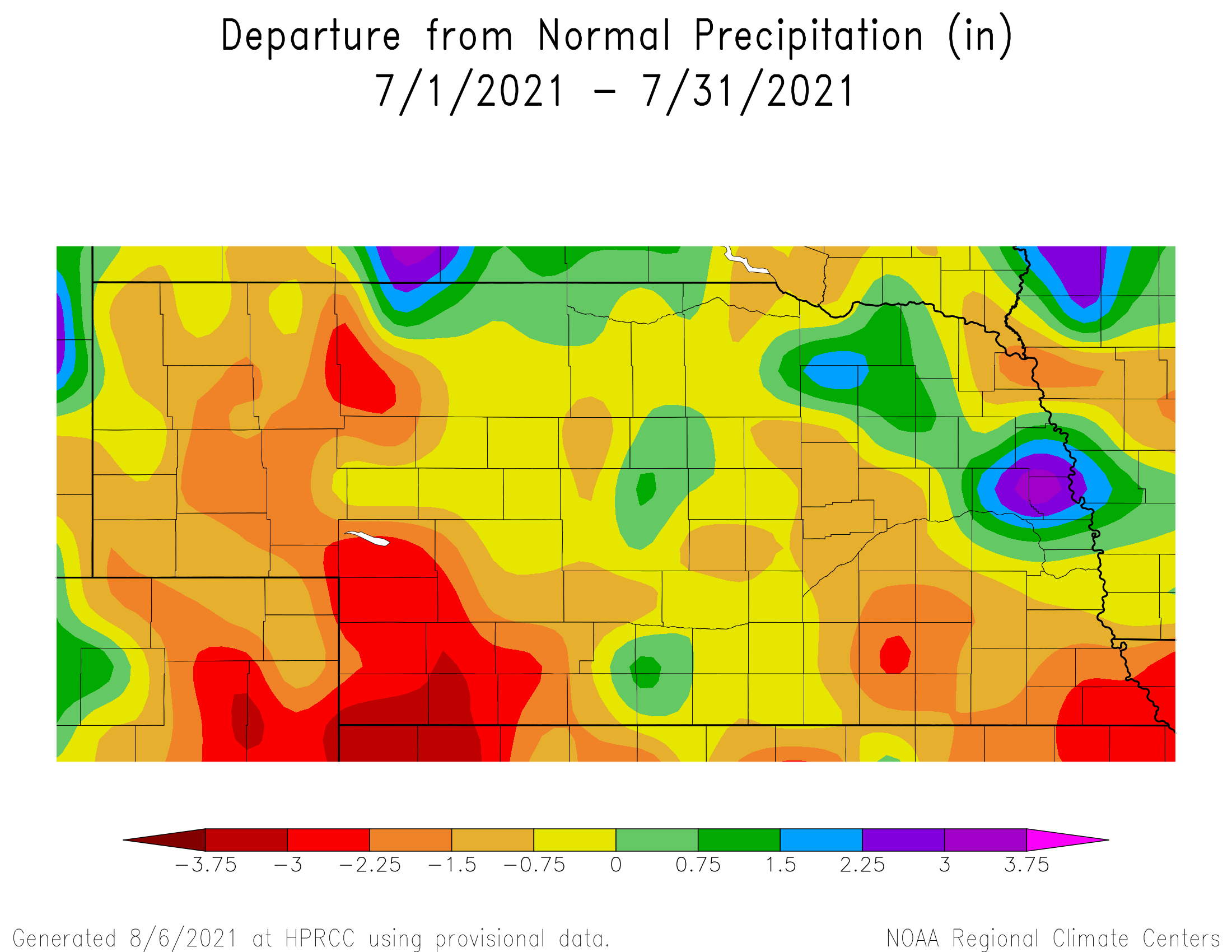 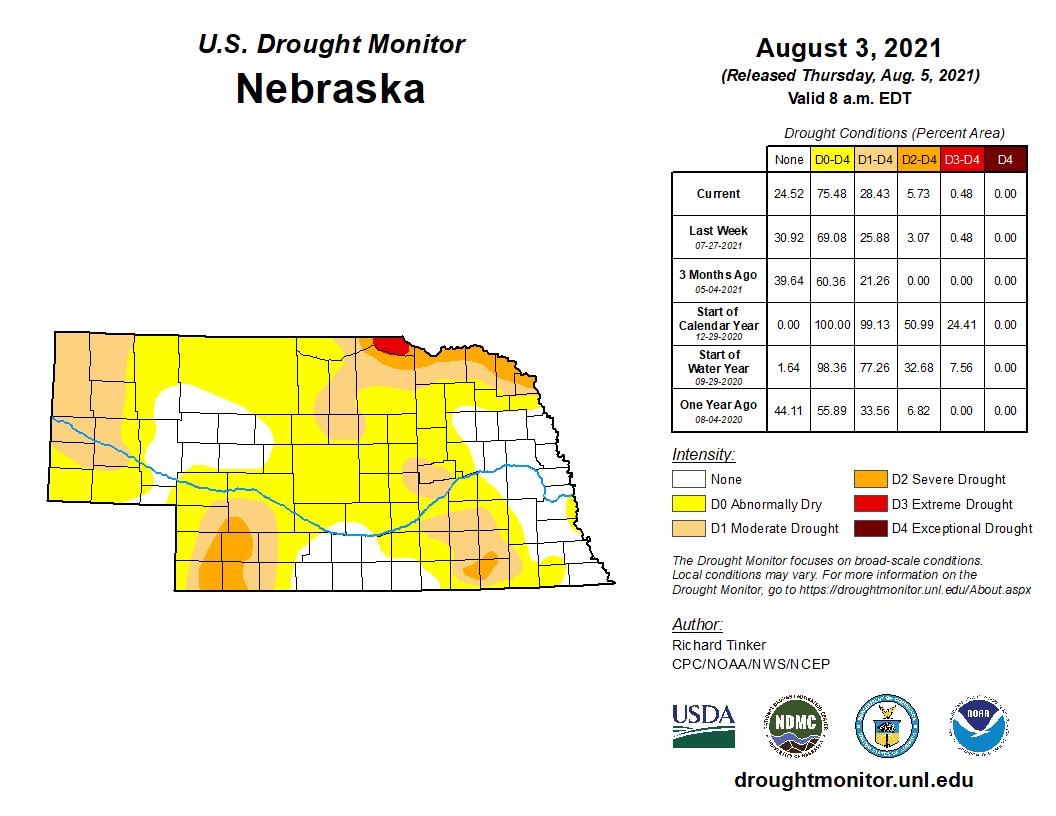 U.S. Drought Monitor depiction for Nebraska at the start of August.

U.S. Drought Monitor depiction for Nebraska at the start of August. 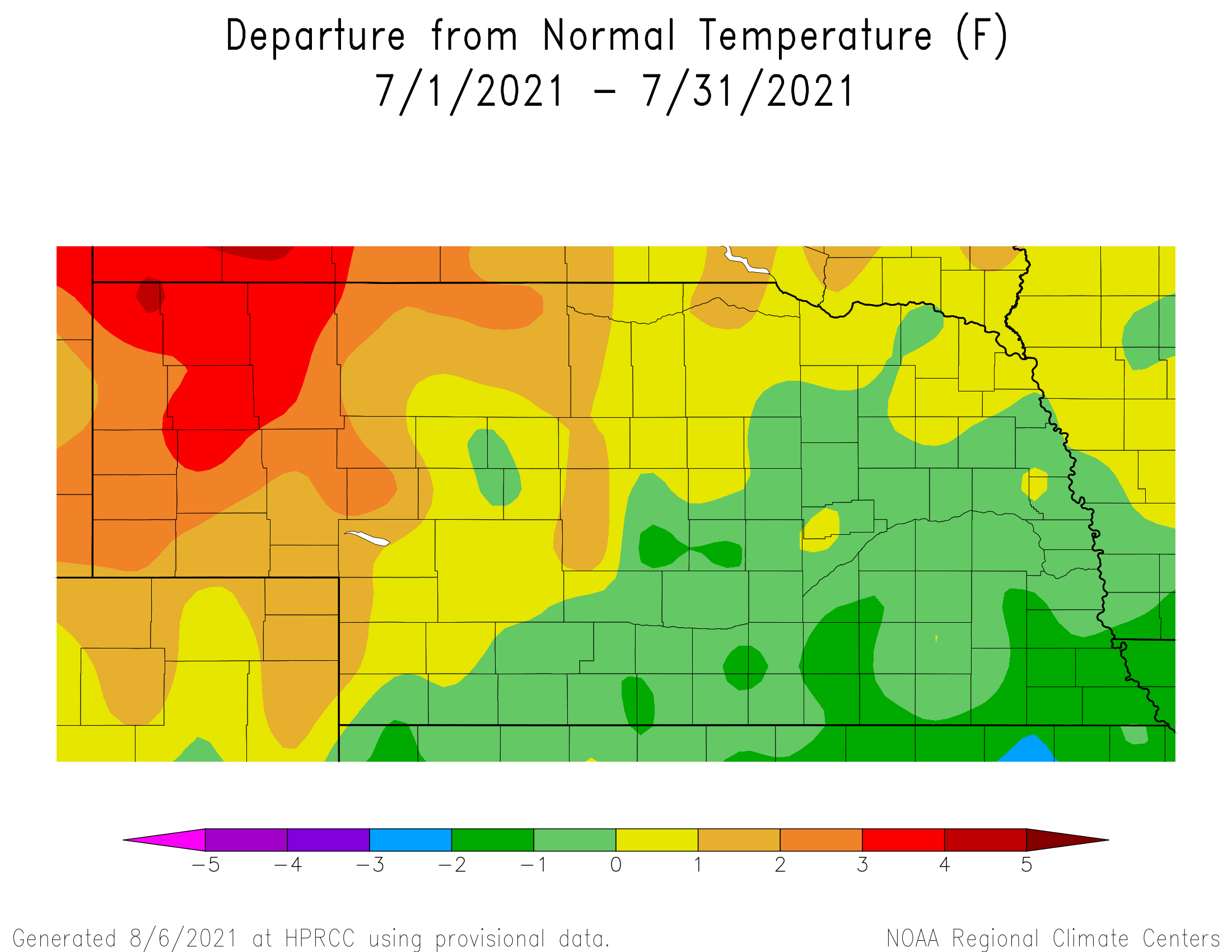 The main story for July was the severe weather event on July 9th and 10th that swept across Nebraska producing high winds, hail and a range of damages from crops, grain bins and pivots to significant power outages. Hail was prevalent in the Panhandle stripping area crops. The Omaha area was hardest hit with widespread power outages, impacting approximately 188,000 customers. Rainfall was primarily below average, aside from isolated pockets in the north and southcentral. Temperatures at many locations across the state reached triple digits and dewpoints were at times insufferable in the high 70s and even up to 81°F. Hazy skies and air quality in the unhealthy category resulted from wildfire smoke originating in the western U.S. and Canada. Several updates were made to drought classifications in response to rain events, or lack thereof, and the state ended the month with 28% in drought, reaching the panhandle, southwest, and portions of the southeast and northeast.

Most of the rating declines were the direct result of above normal temperatures and insufficient precipitation to alleviate crop degradation. The most intense heat of the month developed July 26-30 as maximum temperatures exceeded 100 F for 5 consecutive days across the northern Panhandle, with most locations across the eastern 1/3 of the state receiving at least 2 days where maximum temperatures reached or exceeded the century mark. This heat was couple with dew point temperatures in the middle to upper 60’s west to the low to upper 70’s east. Winds were generally light, but wildfire smoke from Canada combined with the high humidity resulted in low to moderate air quality, particularly for north central and northeast Nebraska.

Although precipitation was below normal, there was a significant severe weather event that materialized July 19 as a cold front swept across the state. Preliminary storm totals from the Storm Prediction Center indicate that 18 hail reports and 183 wind reports were submitted by trained observers. Significant pivot and bin damage was reported in the York, Newman Grove and Giltner areas. Widespread tree, building and crop damage was reported in and around the Omaha metropolitan area as a wind gust of 93 miles per hour was observed at the Omaha Eppley Airport before the wind sensor failed.

The Climate Prediction Center (CPC) released their final August temperature and precipitation outlooks on July 31 and they indicate that below normal precipitation is favored for the northern half of the High Plains region, including Nebraska. The highest probabilities of dryness are assigned to the Dakota’s. This dry area was shifted eastward from the Pacific Northwest and northern Rockies in CPC’s preliminary August Outlook released July 22nd. The August temperature outlook issued by CPC is very similar to the preliminary temperature outlook issued in July. Above normal temperatures are favored for the western United States, the northern half of the High Plains region, as well as the Great Lakes and the northeast. The highest probability of occurrence is forecast for the northern half of the Rockies eastward through Minnesota. Below normal temperatures have been relegated to Texas, Oklahoma, Arkansas, Louisiana and Mississippi.

A storm system made it’s way across Nebraska on July 9th and 10th producing hail and high winds. Damage was seen statewide and wind gusts greater than 60 mph were observed at several reporting stations (86 mph at Alliance, 70 mph at North Platte, 84 mph at Grand Island, 65 mph at Lincoln and 93 mph at Omaha). These measurements are observed at a height of 30ft above ground. The Nebraska Mesonet station northeast of Sparks reported a gust of 67 mph at a height of 9ft above ground. Aside from this event, it was relatively quiet the rest of the month. Two tornados were reported during July, one in the Panhandle and one near Mead.

Precipitation was a have or have not situation this July. Rain was sparse for portions of the southwest with only a half inch or less reported. A total of 1.75 inches or less occurred for the western third of the state as well as a swath in the east central and southeast as well as Dakota and eastern Dixon counties. Greater than 2.5 inches were observed across much of central Nebraska and portions of the east with bands of above normal rain (greater than 4 inches for the monthly total) for an isolated area of Phelps, Kearney, Harlan and Franklin counties, in addition to southern Knox and northern Antelope counties, and portions of Dodge, Washington and Burt counties.

A few areas in southcentral Nebraska reported hefty one-day rain totals greater than 2.5 inches. The highest was an NeRAIN observer near Superior with 3.46 inches on the 25th. An area around Fremont also received some high one-day totals greater than 2.5 inches. A few other pockets of the state in the central and northeast also saw one-day totals greater than 2.0 inches. The Norfolk airport observing station reported a record daily high 1.70 inches due to the storm system on July 9th. The statewide average precipitation of 2.38 inches is 0.83 below normal. Precipitation trends are not very strong in July for Nebraska. Neither long-term (since 1895) nor short-term (since 1991) show significant statewide wetting or drying for this summer month. Precipitation since the end of the last growing season (1 Oct, 2020 to 31 Jul, 2021) is generally at 12 inches or less, with a few areas of less than 9 inches, in the Panhandle. This is around five inches below normal (or 50% to 70% of normal over this time period). Totals are anywhere from 11 to 20 inches for much of central and northcentral to northeast Nebraska, which is 70% to 90% of normal. Extreme northeast Nebraska has only received half of normal precipitation since October 1st. A swath of southeast Nebraska is in the 15 to 18 inch range for the water year, about 70% of normal. A few relatively wet pockets of the state are in the southcentral (greater than 21 inches) and east central (greater than 24 inches), which is above normal. Drought conditions worsened for several areas of the state during July. The Panhandle ended the month with most counties in the moderate drought category. Kimball and Cheyenne counties remain abnormally dry for now. Moderate drought was introduced and abnormal dryness was expanded for counties in the southwest, including all of Hayes and Hitchcock and portions of Dundy, Chase, Perkins and Lincoln counties as well as western edges of Frontier and Red Willow counties. A swath of the Sandhills moved into the abnormally dry category and portions of Merrick, Nance, Howard, Greely, Garfield, Wheeler and Boone counties is now in drought. Conditions deteriorated to D2 (severe drought) in Saline, Thayer and Jefferson counties. Extreme drought (D3) was introduced in Boyd county as some reports on the ground indicate ‘dire’ conditions for some cropping systems. Some improvements were made in the east due to above normal rainfall in these areas.

The temperature pattern this July was such that overall slightly cooler than average conditions dominated in the southeastern half of Nebraska and warmer than average conditions were the rule for the northwestern half. There were a few temperature records broken in the west during July as Chadron reached 105°F on the 26th and 107°F on the 28th. Both set records for their respective dates. Sidney had a 102°F high temperature on the 28th, which also set a new high. Dewpoint temperatures were in the downright unbearable range for portions of Nebraska. Low 80’s were observed for some locations in the east. High humidity coupled with high temperatures resulted in heat indices that made it dangerous to be outside for any length of time. The Nebraska Mesonet station southwest of Rulo reported a 121°F heat index on the 29th.

The statewide average temperature of 74.9°F is just a half a degree above average. July has gotten warmer overall in the long-term (since 1895) by about 1°F. The warming trend has accelerated in recent decades with 2.4°F of warming in the last 30 years (since 1991).