A tale of two Decembers

December started the month with temperatures above normal, but ended with frigid temperatures after an Arctic airmass settled over the eastern two-thirds of the mainland United States. Precipitation was below average, and the U.S. Drought Monitor showed much of the state now in the pre-drought or abnormally dry category. Learn more about what December's climate conditions meant for Nebraskans in this month's edition of the Climate Update. 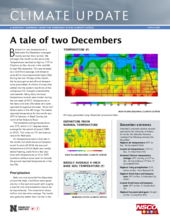