Warmest December on record and derecho highlight the start to winter 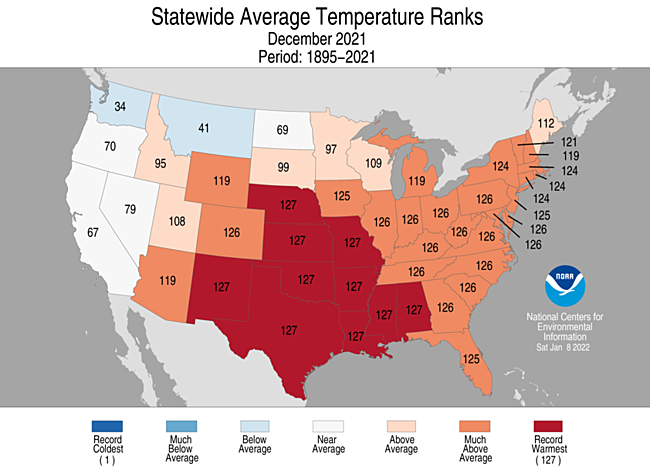 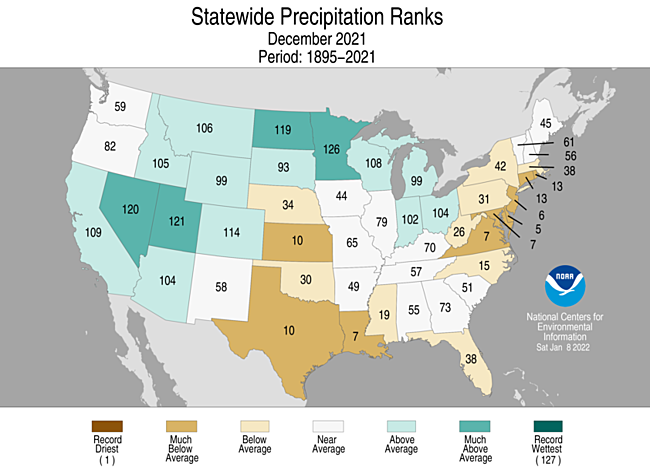 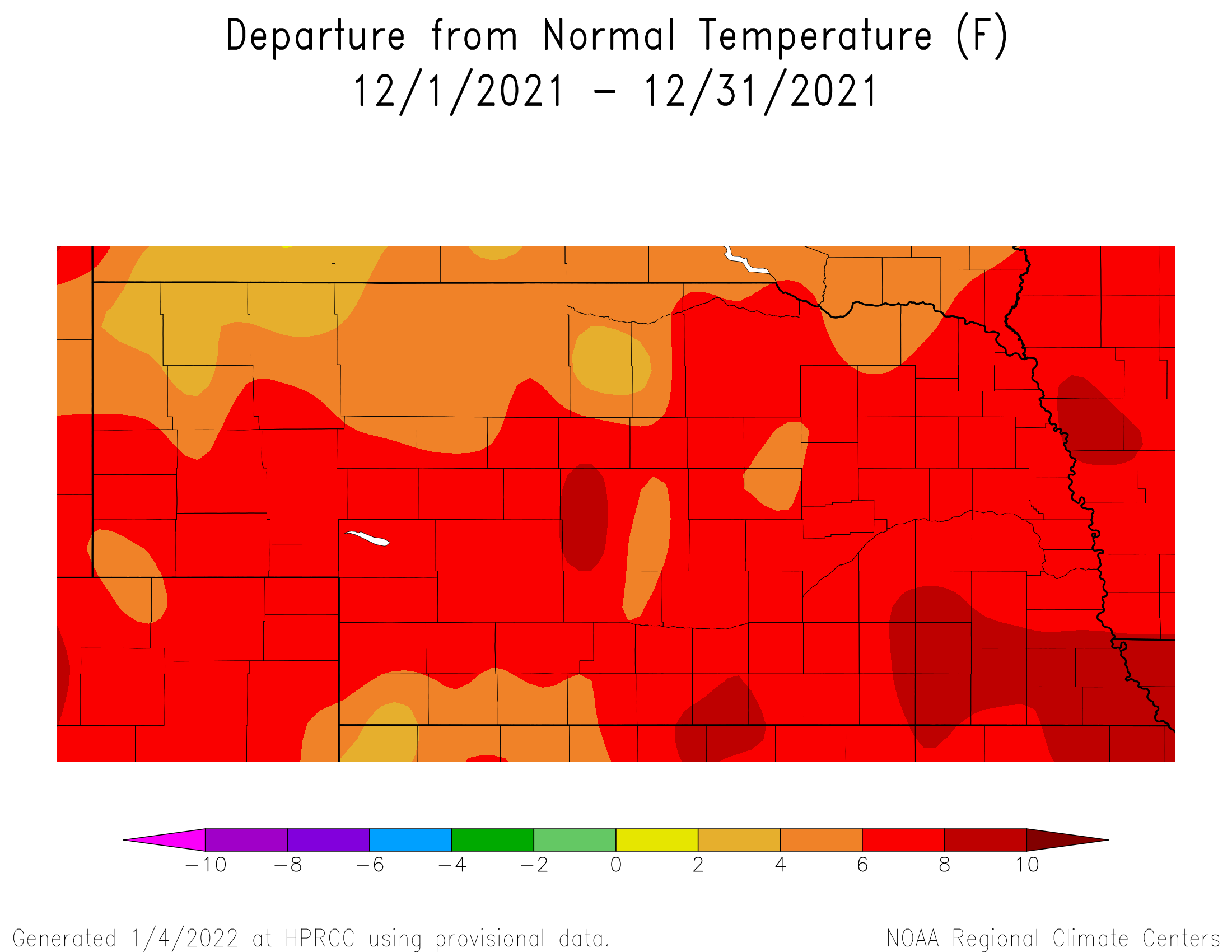 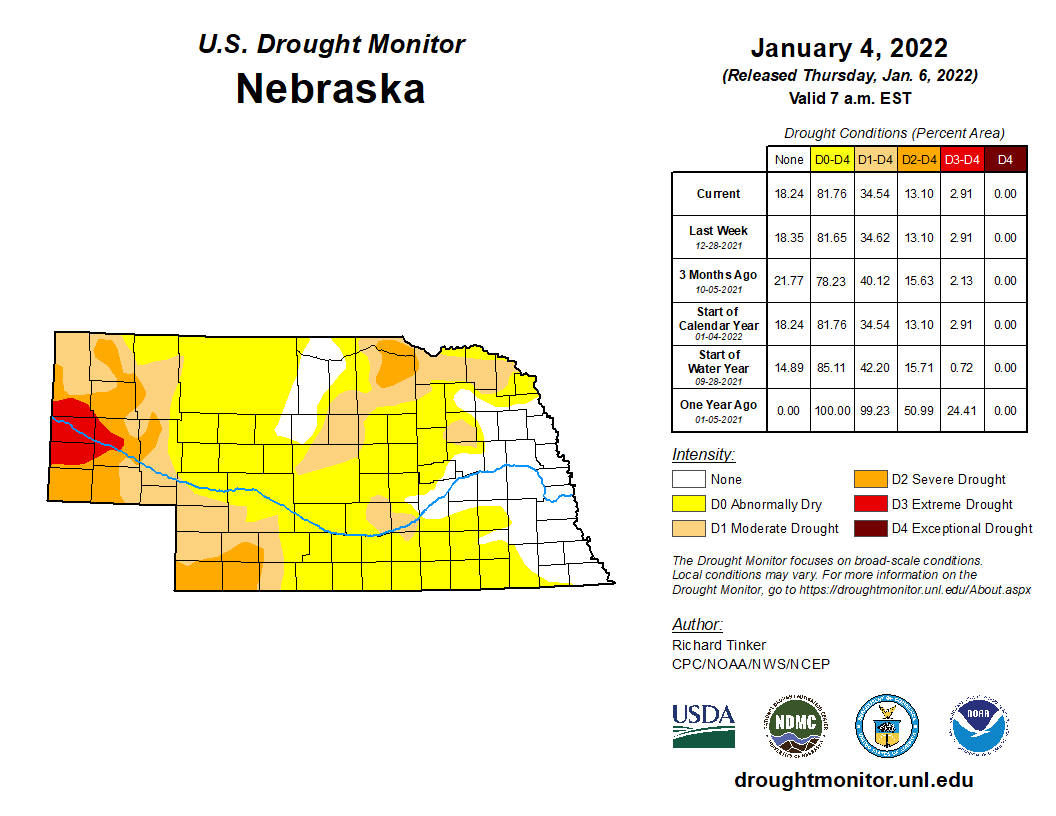 A lot of warm days and a fast-moving storm, called a derecho, that spawned 30 tornados made for a wild December in Nebraska. We experienced our warmest December on record this year, as did the aggregate U.S. monthly average temperature. The extremely warm conditions helped spawn what is typically a summertime event rolling across the state on the 15th. High straight-line winds, hail, rain and tornados were all experienced in this event, causing localized damages and school closures for a large swath of Nebraska. Conditions were mostly dry with little snowfall to start the winter. Drought saw a general worsening in the south and southwest with 35% in drought at the start of 2022.

We rounded out 2021 with anomalously high temperatures overall as many locations around Nebraska reported a top 10 warmest December on record. Norfolk’s average monthly temperature of 32.6°F is highest in 77 years of systematic record-keeping. Similar for Grand Island as their 35.5°F average temperature was also warmest on record. Omaha experienced their warmest December day on the 15th at 74°F. In Scottsbluff, the afternoon high on the 2nd was 77°F in their 8th warmest December. Many other high temperatures in the 60s and 70s set daily records for their respective dates. The statewide high for the month reached above 80°F near Wallace and Beaver City. These temperatures are at or approaching 30 degrees warmer than normal for this time of year. Areas in the north and west reached below freezing with a state low of -10 near Harrisburg, not far from the Wyoming border.

It isn’t often there is a severe weather section in a December weather and climate summary, but 2021 was a different story. A powerful storm system began to impact the western United States between the 8th and 12th of December produced heavy rainfall and significant snow accumulations across the west coast states. Two systems rotating around this upper air low quickly ejected eastward and resulted in two widespread tornado outbreaks. The first resulted in the devastating tornado activity across the lower Ohio and mid-Mississippi river valley. The second system had a direct impact on Nebraska, Iowa, Minnesota and Missouri and produced widespread severe thunderstorms and tornados. Initial storm reports indicated eight tornado touchdowns across eastern Nebraska, but post storm surveys by the National Weather Service increased the tornado count to at least 30 touchdowns. There were three hail damage reports and 93 reports for high winds. Damage reported across the state was to center pivots, farmstead and urban structures with no loss of life.

Strong southerly winds in advance of the storm event brought smoke from Kansas wildfires and dust from dry winter fields. These winds were persistent and strong, with gusts higher than 50 mph across the state. The highest observed gust of 93 mph (at 30 ft above ground) occurred at the Lincoln airport. Nebraska Mesonet stations reported a maximum gust of 69 mph (at 9 ft above ground) three miles southwest of Cook. Preceding the weather front, temperatures soared into the mid 70s and dewpoint temperatures were at or near 60°F, exceptionally high for December.

The warm December resulted in a general lack of snowfall around the state. Spencer, Valentine, Chadron and Harrison reported the highest monthly totals of 10 to 14 inches. Areas in the Sandhills, northeast and western Panhandle received around four to six inches. Elsewhere, totals were less than three inches, with many locations not reporting any snow.

The Climate Prediction Center (CPC) released their updated January temperature and precipitation outlooks on December 31st which indicates that below normal temperatures are favored for all of the state with the exception of the southern Panhandle and the western half of the southwestern climate district. There are equal chances for above normal, normal, or below normal precipitation statewide. Nebraska lies on the southern periphery of expansive area of below normal temperatures forecasted for the Pacific Northwest eastward through the north central High Plains (ND and SD). Nebraska is also sandwiched between two areas of above normal precipitation forecasted for the northwestern United States and the eastern corn belt (Great Lakes, Ohio river valley and mid-Mississippi river valley).

Numerical models indicate that during the first three weeks of January the United States will be dominated by an upper air ridge over the west coast and an upper air trough extending southward from the Hudson Bay low which includes the eastern half of the country. Nebraska appears to be on the western fringe of the upper air trough which would support cooler than normal temperatures, but would also support quick warmups anytime the trough shift slightly east of the state. As additional pieces of energy rotate around this trough, quick moving Alberta Clippers moving southward will bring reinforcing shots of Arctic air. If any of these Alberta Clippers come down the front side of the Rocky Mountains, then upslope flow conditions from cold air damming against will have the ability to generate accumulating snowfall across the western third of the state. As we approach the final 10 days of the month, the GFS model is hinting at a relaxation of this pattern and a movement back toward a more aggressive precipitation pattern for the western half of the country as Gulf of Alaska low begins to move toward the west coast of the United States.

Very warm temperatures and a lack of precipitation at the beginning of December reduced the need for supplemental feeding for cattle grazing corn stalks. Unfortunately, these same conditions, coupled with high wind event days created dangerous wildfire conditions due to low atmospheric relative humidity levels at the surface.

More typical December weather developed during the final week of December as Arctic air briefly infiltrated the state upon the passage of Alberta Clippers moving southward from Canada. A significant snow storm began to develop over the central Rocky Mountains on New Years’ Eve, but the main impacts from this system didn’t impact Nebraska until New Year’s Day. However, in advance of the surface low moving through the central United States, very strong winds in excess of 40 mph buffeted the western half of the state created reduced visibilities from blowing dust. This same system produced 100 mph wind gusts near Boulder, Colorado on December 30th fueling the rapid movement of a wildfire that broke out on the cities southwest side and moved through the town of Louisville leading to the total destruction of 991 buildings, with additional damage to another 127 structures.