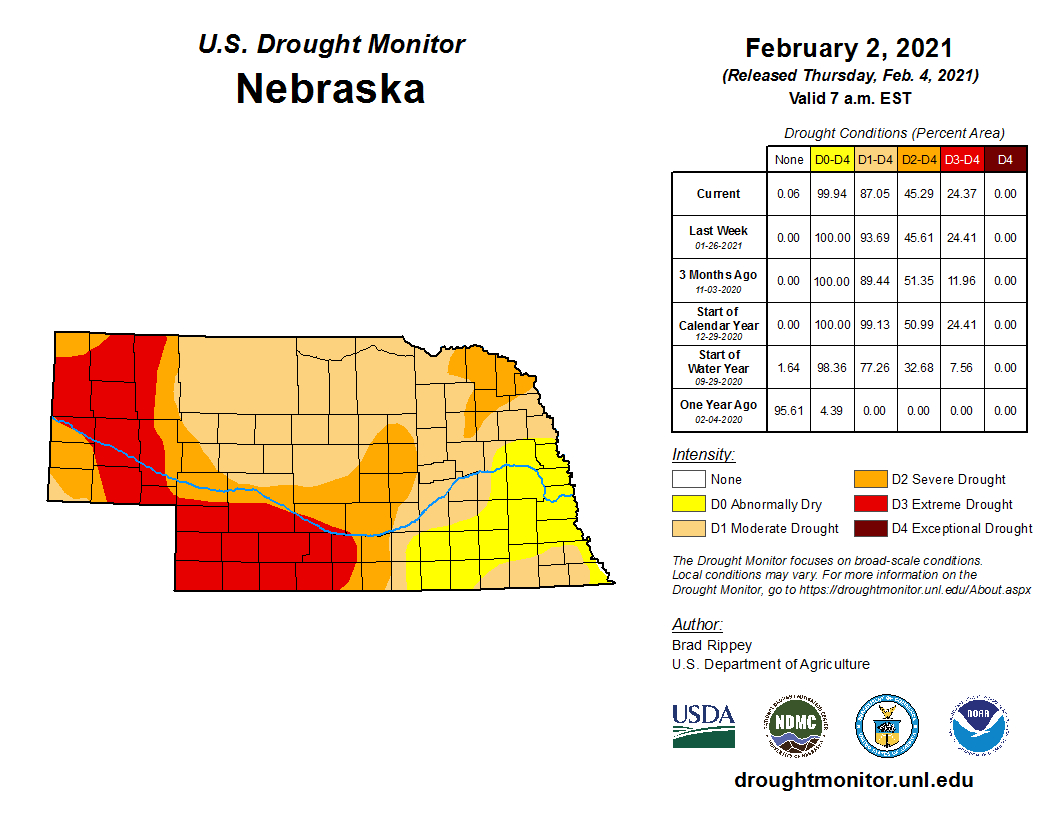 US Drought Monitor depiction for Nebraska

US Drought Monitor depiction for Nebraska 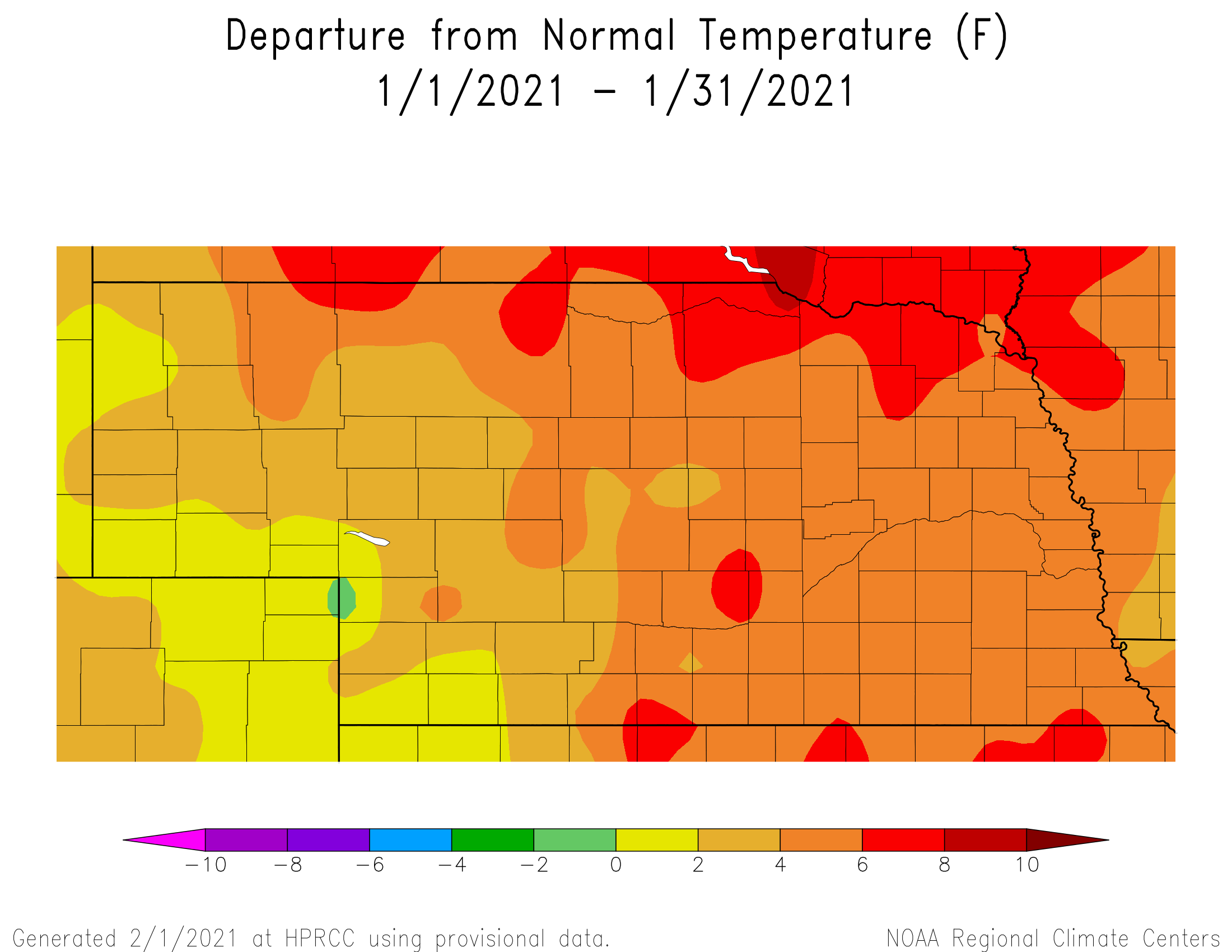 For the second month of winter, Nebraska experienced warmer than normal temperatures. Though we were not without typical winter weather as a blizzard swept through on the 24th – 26th and resulted in record daily snowfall for the south and east, along with strong sustained winds statewide. Overall, precipitation was above normal in the east and below normal in the west. Drought conditions improved slightly in southeast Nebraska with a transition from D1 to abnormal dryness. Extreme drought remains in the southwestern and western portions of the state. Expect a return to winter conditions in February as climate outlooks are trending toward cooler and wetter than normal conditions.

The big story for January was the blizzard and significant snowfall resulting in record-breaking amounts for the 25th. Respective airport observing stations at six locations all reported daily record snowfall and precipitation for this storm event: Norfolk (6.6” snow, 0.44” water equivalent), Omaha (11.9”, 0.91”), Lincoln (14.5”, 1.13”), Hastings (8.8”, 0.87”) and Grand Island (10.2”, 0.97”). Travel disruptions and closed schools and businesses were widespread. The monthly total snow for the Lincoln Airport of 18.9 inches set a new January record (going back to 1948). For the month, liquid equivalent precipitation was above normal in the east, as would be expected given the snow amounts, and below normal in the west. Statewide, Nebraska averaged 0.64 inches of precipitation, which is 0.17 inches above normal. Incidentally, January has been getting drier in recent memory (since 1990), by about -0.15”.

Average monthly temperatures were quite warm statewide as departures in the north approached 8°F. The southwest and west was cooler in a relative sense with temperature departures less than 2°F. Daily minimum temperatures were quite a bit warmer than normal given the propensity of cloud cover. The statewide average temperature of 29.2°F is 4.2°F warmer than normal. Over the past three decades, January has warmed by about 1°F. The highest temperatures for the month were in the mid 60s in southcentral and southwest Nebraska. Below zero readings occurred in all corners of the state with the lowest temperatures of -11 to -13°F in higher elevations of the Panhandle. Wind chill temperatures reached -15°F at the Nebraska Mesonet station near Lexington on the 27th.

January was a tale of two cities across Nebraska. A very active weather pattern developed across the southern Plains during the second half of January as systems moved into the west coast and moved eastward through the southern Rockies. This storm track was favorable for widespread precipitation events that impacted the eastern half of the state, but largely bypassed western Nebraska.

Winter wheat conditions across the Panhandle and southwest Nebraska continue to be stressed due to the lack of soil moisture and continued dry conditions. Because of the dry conditions, soil temperatures at the 4-inch depth approached the low 20’s after the January 25th storm brought single digit lows to the region. Wheat will be vulnerable to winterkill for the remainder of this winter, especially if the February forecast for Arctic air occurs without protective snow cover.

A large portion of east central and central Nebraska received nearly a season’s worth of snowfall from these series of storms that crossed the southern and central United States. The most significant event on January 25th brought widespread 6-12 inch from Kearney eastward, with totals approaching 15 inches in the Lincoln area. This was a high moisture event that brought 0.75-1.25 inches of liquid equivalent moisture.

With surface temperatures above freezing prior to the January 25th snow event, moisture from this storm will have an open pathway for soil infiltration. Normally at this time of year soil surfaces would be froze and precipitation would be expected to run off into watersheds. The flip side to this beneficial moisture is that the deep snowfall will impede cattle grazing corn stocks, which would require supplemental freezing. Snow surfaces will likely crust in response to melting when temperatures breach the freezing mark during the day and refreeze overnight.

The Climate Prediction Center (CPC) released their updated February temperature and precipitation outlooks January 31. Compared to the preliminary February outlook released 10 days prior, CPC has changed their temperature outlook from warmer than normal across the southeastern United States to a strong likelihood of below normal temperatures east of the Rocky Mountains.

Short term weather models through the middle of February depict a strong upper trough developing east of the Rocky Mountains that will pull Arctic air into the region through the middle of February. Several impulses moving down the backside of this expansive trough appear to develop snow activity across western Nebraska periodically through mid-month.

Uncertainty exists from mid-month on in regards to temperature and precipitation trends. There are signs from the GFS model that temperatures will begin to moderate near mid-month as the eastern U.S. upper air trough weakens and lifts north. At the same time energy moves into the west coast and shifts east into the central Rockies. This would increase the likelihood that a significant snow event will develop somewhere across the central Plains the third week of February if current model forecast depictions are correct. In addition, if this pattern verifies, CPC’s final temperature and precipitation outlooks for February will likely come to fruition across Nebraska. 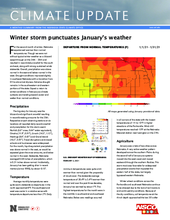