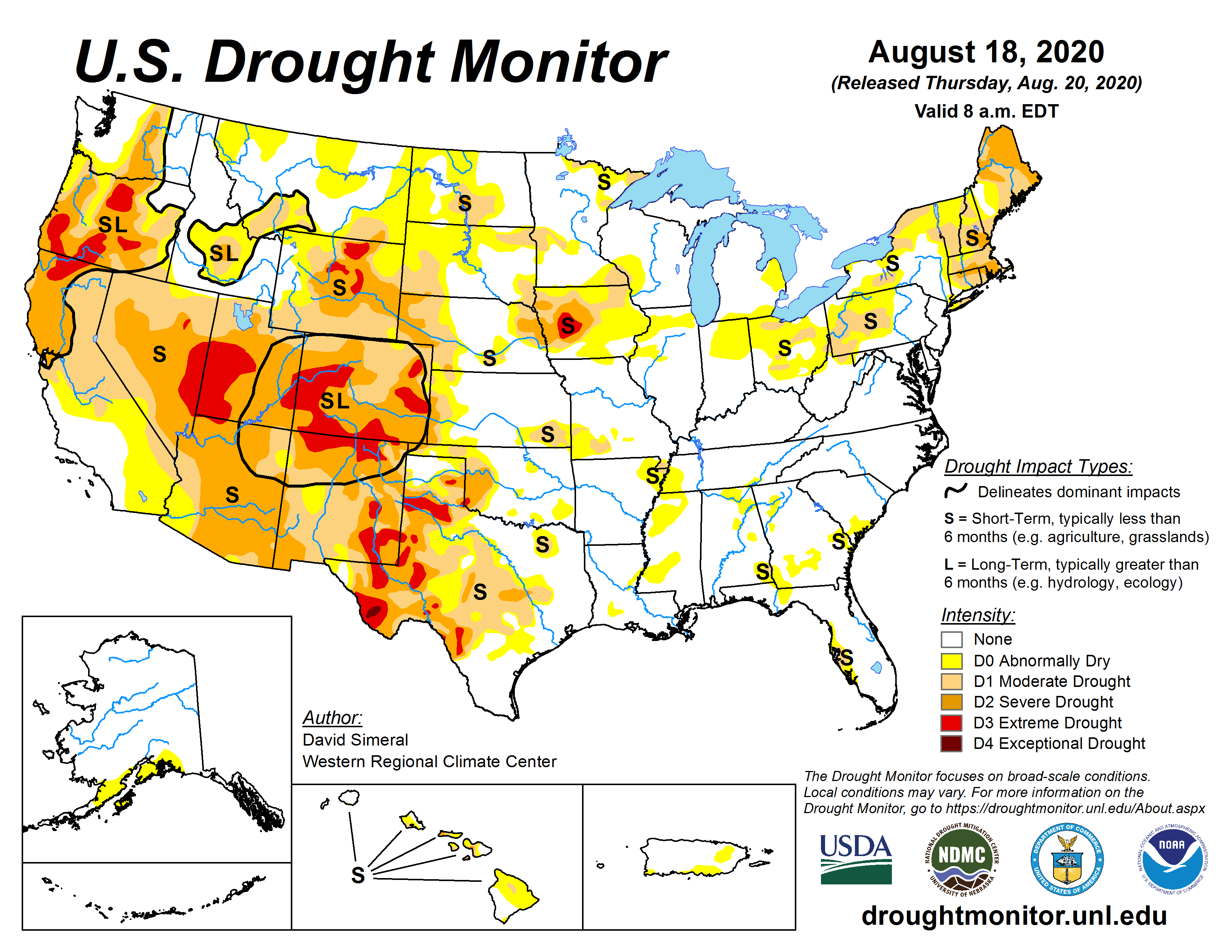 The Climate Prediction Center (CPC) issued their September – November temperature and precipitation outlook on August 20th. Figures 1 and 2 depict the official CPC outlooks and the general theme is warmer than normal with expanding dryness likely across southern Rockies, southern and central Plains, and western areas of the lower Mississippi River valley. There appears to be good continuity between the July and August issuance of the fall outlook (Sep-Nov) for temperatures and a slight increase in the odds of dryness across the central Plains. Figures 3 and 4 are the July release (1.5 month lead time) of the fall outlook for comparison purposes.

I would be inclined to agree with CPC on their fall outlook primarily based upon known relationships between fall weather trends and La Nina development. With La Nina odds increasing, there now appears to be run to run consistency in CPC outlooks going forward in time. As La Nina development odds have increased from 40 to 60 percent the past 3 months, the probabilities of above normal temperatures has increased nationwide and dryness probabilities have expanded and strengthened across the central and southern Plains.

This strengthening of forecast probabilities and model run consistency increases confidence that the official CPC fall outlook will verify. There are 3 factors I can identify that will determine the accuracy of CPC's fall outlook and they are the amount of area currently in drought, the impacts of a potential La Nina event, and the impacts of tropical activity this fall in the Atlantic Ocean.

The latest U.S. Drought Monitor issued August 20th for conditions valid through August 18th at 8 am Eastern Standard Time as seen in Figure 5 indicates an expansive area of dryness across the southwest, southern Rockies, the western half of the southern and central High Plains, as well as an expanding area that encompasses eastern Nebraska, western Iowa, and eastern South Dakota. Entering the growing season, soils were at full recharge across eastern Nebraska and western Iowa, but persistent dryness that has intensified during August has depleted these reserves and crops are showing drought stress. Below normal moisture this fall would further intensify drought conditions, particularly in regards to drought stricken pastures and winter wheat planting across western Nebraska.

If CPC’s official forecast comes to fruition, then drought relief will not occur this fall. In fact, CPC’s precipitation and temperature outlook would suggest dryness would expand further eastward into western sections of the lower Mississippi River valley and intensify over the western half of the southern Plains. Further northward, the official outlook is neutral on precipitation so there is currently no strong signal for aggressive precipitation development outside of extreme northern Montana. Areas with drought conditions (D1 or greater) will likely persist and an optimistic forecast would ease drought conditions one category (D2 to D1, D1 to D0) by the end of November.

During the past 3 months, the CPC has increased their odds that a La Nina event will develop this fall. In June the event probability was 40-45%, in July it was upped to 50-55%, and stands at 60% after the latest forecast was issued August 13th. La Nina is an abnormal cooling of the Equatorial Pacific that typically strengthen the northern jet stream and weakens the sub-tropical jet. Since the sub-tropical jet stream plays an important role across the southern 1/3 of the United States, La Nina conditions usually lead to a reduction in fall and winter moisture. With drought conditions firmly established across the central and southern High Plains region, La Nina formation is concerning as it would support further expansion and strengthening of this area through the remainder of 2020.

Figure 6 shows the sea surface temperature anomalies for the central half of the Pacific basin and below normal Sea Surface Temperatures (SST’s) extend from South America through the central Equatorial Pacific. Not only is there colder than normal water at the surface, there is a wide expanse of below normal ocean water underneath the surface as shown in Figure 7. This deep pocket of cold water began to develop in the western Pacific during the first half of 2019 and has been slowly building eastward. This cycle has brought about the onset of La Nina conditions and its strength and longevity will likely depend on the contribution of water moving from the Gulf of Alaska southward toward the eastern Equatorial Pacific.

If the above normal SST's in the Gulf of Alaska turn colder than normal this fall and winter, then it would support a multi-year La Nina event. If this anomalous warmth fails to dissipate, we are likely looking at a La Nina event that will fade away by the end of next spring. This will play an important role for agricultural interests across the western corn belt. Multi-year El Nino and La Nina events usually strengthen conditions that develop during the onset of the event. Thus drought would be strongly favored for the western corn belt during 2021. If the La Nina event dies a normal death by the end of next spring, then the odds favor a return to more widespread precipitation events during the first half of the summer.

Typical fall relationships under developing La Nina’s favor warmer and drier than normal conditions across the western half of the southern Plains northward through the I-80 corridor in Nebraska. Dry conditions occur 55-60 percent of the time across southern Nebraska, increasing to 60-65% across northern Kansas, further increasing to 70% or greater across southern Kansas, Oklahoma and Texas. The extent of dryness east of this region is dependent on the mean position of the northern jet stream heading into the fall period. Thus, the expansion of dryness during August into the eastern half of the High Plains is concerning because soil moisture has been depleted for areas currently depicting drought. A dry fall puts further pressure on this winter and next spring to be wet enough to make up for the loss of fall soil moisture recharge.

My thoughts are that the intensification of dryness experienced during August will continue into the first two months of the fall. Above normal temperatures would be strongly favored across the western half of the High Plains, but more uncertainty lies in the eastern half of this region. That is because upper air lows have consistently moved from the Pacific Northwest into the south central Canada the past two months. The systems have not been able to dislodge or weaken the southern Rockies upper air ridge. Therefore, these upper air lows moving along the upper air ridge periphery have been unable to draw significant moisture northward from the Gulf of Mexico into the western High Plains.

If this trend continues through the fall into the early winter, most of the major precipitation activity will be dependent on how far southward these upper air lows develop. That will depend on whether the southern Rockies upper air high pressure can block systems from entering the Pacific Northwest moving toward the central Rockies. La Nina development would favor the continuation of this blocking high, so the trends that developed this month across the corn belt are likely to continue through the first half of this fall. Most of the major wetness issues, if they develop, will likely occur across the upper Midwest (ND, SD, MN), Great Lakes region (WI, MI), as well as the area from the central half of Iowa eastward through most of the eastern corn belt. On the southern end of this region, tropical system activity will likely determine how widespread wetness issues become.

The late October through November period carries the most uncertainty in the forecast period. At some point, the mean position of the upper air lows over southern Canada will begin to push southward as we approach winter. On rare occasions it doesn’t and we end up with a winter like 2011-12, which featured warm and dry conditions across the western half of the country. However, barring a 2011-2012 winter, the southward movement in the position of these upper air lows during late fall would be supportive of major snow activity for the Dakota’s and Minnesota. If this occurs and a good foundation of snow can be built in this region prior to December, then it would help strengthen cold air penetration from Canada during the winter by reducing the moderating impacts of cold air moving over bare ground.

The underlying question for the central High Plains (NE, KS) will be whether the storm activity that has been concentrated across the upper Midwest will build southward into the late fall and winter. If it does, then late fall and early winter could be especially active, particularly the eastern half of the region. If the blocking high over the southern Rockies remains strong and expands eastward, the end of the fall and much of the winter will likely be drier than normal, with periodic movement between well above and well below normal temperatures, as moisture moving northward from the Gulf of Mexico into developing surface lows will be shunted east of the region.

Tropical activity in the Atlantic basin has been unusually active up to this point in the Hurricane season (Jul-Oct), with 12 named storms as of August 19th. In a typical year there are 12-14 named storms depending on the data source and the length of the time used as a comparison period. Currently, there are two systems that are projected to become named storms, with another wave moving off of the coast of Africa this is expected to develop into a tropical system. One system is currently west of the Leeward Islands and is projected to move toward Cuba and southern Florida. The second system is currently in the central Caribbean and is projected to move toward the southern Yucatan Peninsula.

With September being the most activity hurricane month of the year period, normal activity from trough the remainder of the season would result in 18-20 named storms. If the current pace of tropical formation continues, then 22-24 named storms are likely. This uptick in tropical system activity is not unexpected as building La Nina conditions increases the speed of westerly winds aloft over the Equatorial region, which in turn lessens wind shear that can rip apart developing storms. Tropical storms this year have hit Texas, Louisiana, Florida, North Carolina, and the northeastern U.S. with landfalls so far this season.

Basically, Atlantic tropical activity is not favoring any one region and presents a real wild card in relation to the CPC fall precipitation outlook. Any one strong hurricane making landfall across the western half of the Gulf of Mexico has the ability to push rainfall far inland. For the southern Plains, it may take a major hurricane landfall on the southern Texas coast to drive the system far enough inland to bring enough moisture into western Texas to ease the current drought. For the eastern corn belt, a landfall in Louisiana has the ability to lift the system northward and bring heavy rainfall to the region right during the normal harvest window. Barring these unpredictable scenarios, it is likely that the southern Rockies upper air ridging will continue to strengthen and build northward through the fall resulting in poor subsoil moisture recharge across the western ½ of the region from Texas northward through Nebraska.