The First Widespread Heat Wave of 2022 is on our Doorstep 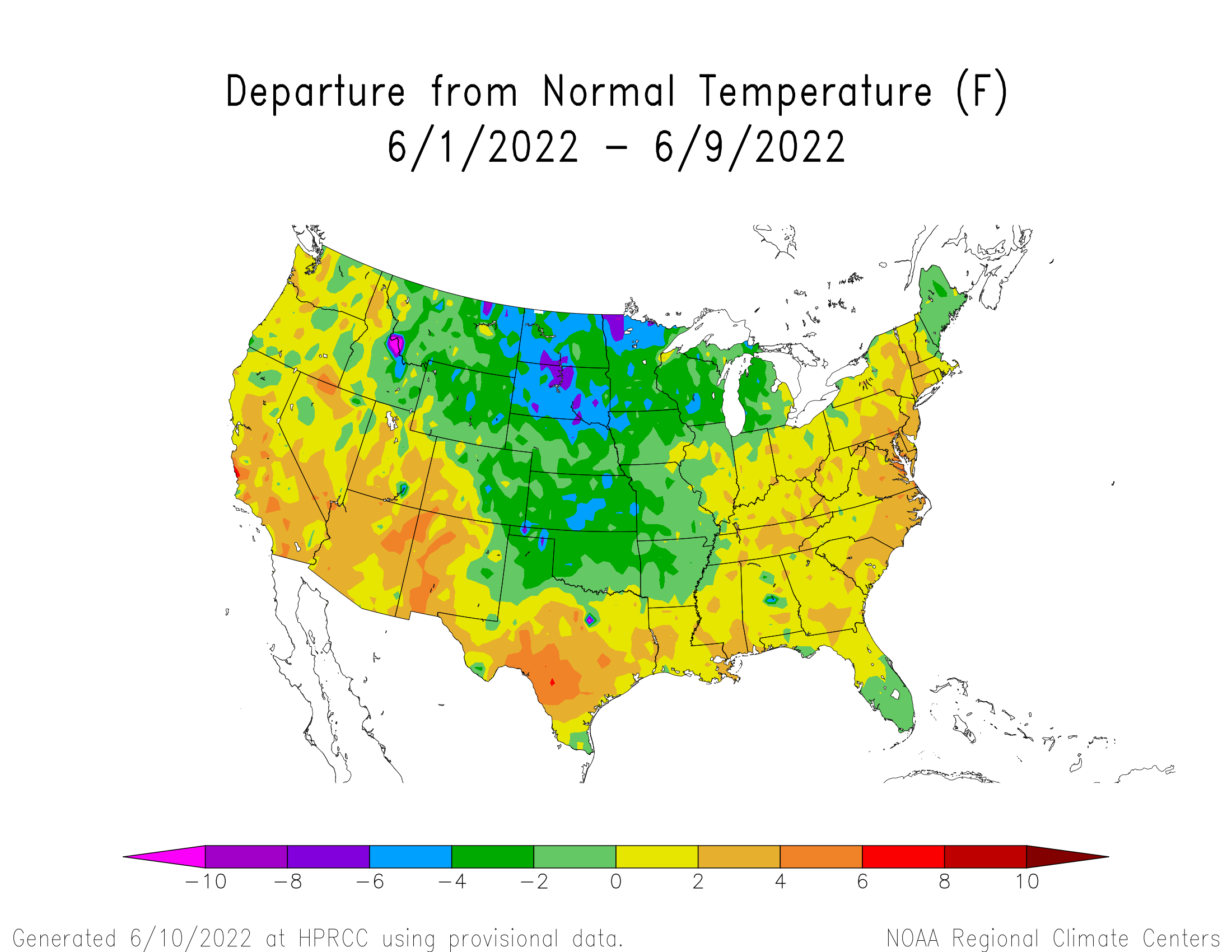 After a cool start to June (Figure 1), numerical weather models are in strong agreement that well above normal temperatures will dominate the central and southern United States during the next 10 days. Our first taste of heat arrives this weekend with high temperatures on Saturday (11th) pushing into the upper 80’s north to the middle 90’s across southwest Nebraska. High temperatures are then forecast to rise into the mid 90’s north to low 100’s south on Sunday (12th) and Monday (13th), before an upper air trough moves across the northern Plains and brings a slight cooling trend Tuesday (14th) and Wednesday (15th).

With recent rainfall across Nebraska, western Kansas and eastern Colorado, there should be enough moisture in the lower atmosphere to keep dew points elevated into the 60’s, which would support peak heat index values into the 110-115 F range, especially Sunday as wind speeds are forecast to be in the 5 to 15 mile per hour range. Winds will be stronger on Monday, which should help make the heat and humidity a little more bearable.

As the trough crosses the northern Plains, the Storm Prediction Center indicates that severe weather development in favored for the western 1/3 of the state Sunday evening through the early morning hours of Monday as a surface cold front begins to slowly push through the state. It may not be until Tuesday afternoon before this front reaches southeast Nebraska.

So if thunderstorms do develop, they will likely attain severe status quickly with the abundance of heat and moisture south of the cold front. This shouldn't come as a surprise, since severe weather has been widespread this month. Through the first 9 days of June, cumulative severe weather reports archived by the Storm Prediction Center indicate at least 4 tornadoes have occurred, along with 179 hail reports and 93 wind gust reports exceeding 58 miles per hour.

Current model guidance suggests that central and north central Nebraska have the greatest chance of receiving moisture in excess of a half inch. Areas to the west, south and east of this region are forecast to receive less than a quarter inch of moisture or less. High temperatures are currently forecast to drop into the upper 80’s south to low 80’s north on Tuesday (14th) and Wednesday (15th).

Once this trough moves into the western Great Lakes region, weather models indicate it will intensify and force the upper air ridge currently centered over the south central and southeast United States to expand west and northward. Under this scenario, hot temperatures are strongly favored by weather models from Nebraska southward through Texas. High temperatures would consistently range from the middle 90’s to low 100’s from June 16th through at least June 20th. Heat Index values are likely to push above 110 F June 17-19 when the center of the high pressure ridge lies over the central United States and is coupled with light surface winds.

The Climate Prediction Center’s 6-10 day and 8-14 day outlooks issued yesterday (9th) afternoon indicates that there is a high probability for above normal temperatures and below normal precipitation through June 22nd (Figures 2-5). This morning’s GFS model run forecast shows that the upper air ridge will begin to break down June 20-21 as the upper air trough over the western United States begins to move toward the northern High Plains. If this does occur, then high temperatures would cool back into the 80’s and possibly into the upper 70’s depending on how much cool air to our north can be drawn southward. If this trough fails to move eastward, then hot and dry conditions would be favored for the remainder of June.

One interesting aspect in the GFS model forecast is that deep tropical moisture will move northward through New Mexico and Colorado and get entrained into the western upper air trough as it moves toward the central and northern High Plains and is showing up in the 8-14 day outlook (Figure 5). Subsequently, if this feature does verify, then as the upper air ridge breaks down, a return to active severe weather is favored for the central Plains (KS, NE, SD) during the final week of the month.