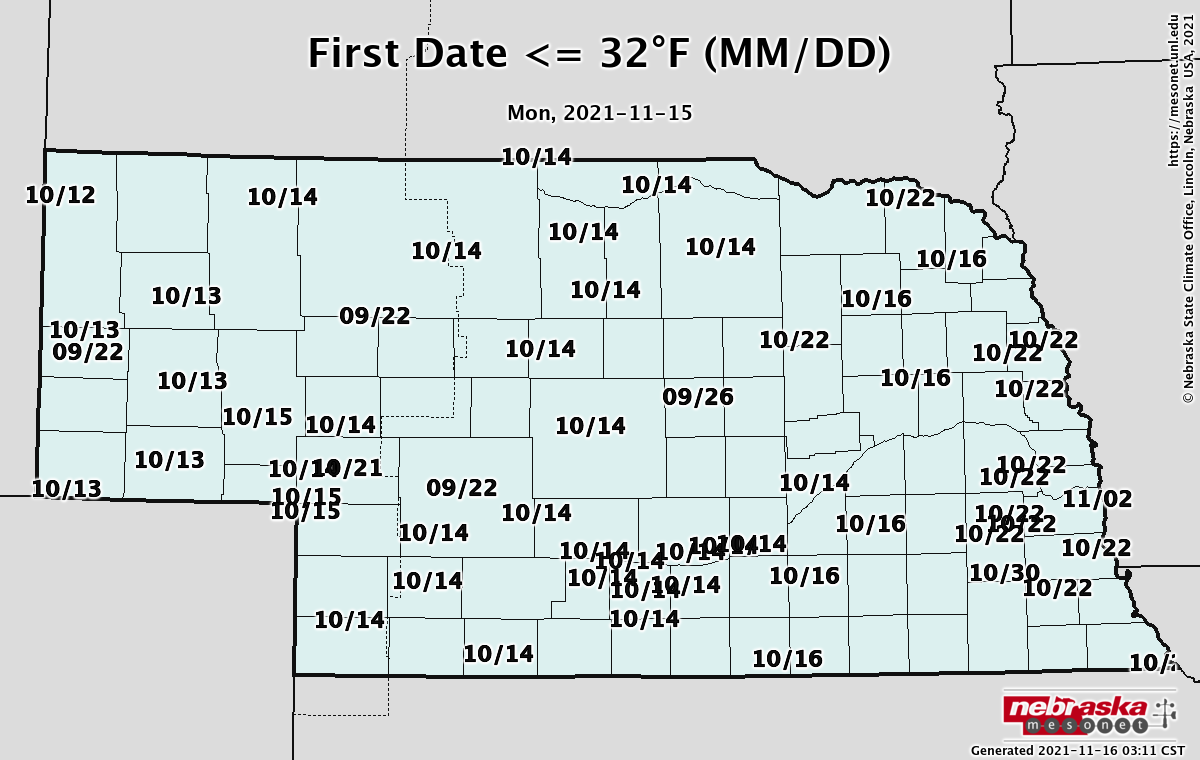 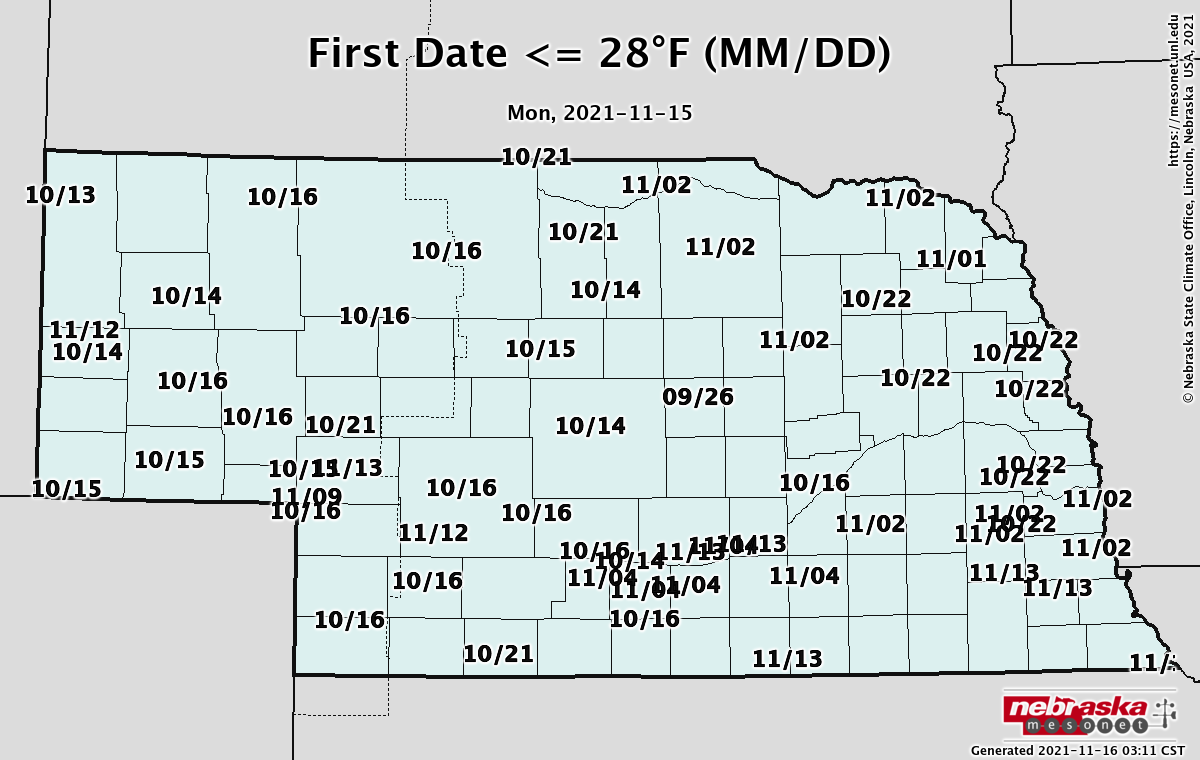 A surge of Arctic air behind a strong upper level low that crossed the northern Plains November 11th -13th finally brought hard freeze conditions (minimum temperature 28°F or lower) according to weather observations taken by the Nebraska State Climate Office automated Mesonet. With above normal temperatures from the final 6 days of October through the first 12 days of November, freezing conditions were blocked from moving southward out of Canada due to a persisting upper atmospheric ridge situated over the central third of the country.

The first surge of cold air brought isolated frost conditions to three Mesonet locations between September 22nd and 24th: Scottsbluff (9/22), North Platte (9/22) and Ord (9/24). Based upon the 1991-2020 fall freeze information (the new official Normal period), each of these locations would be ranked as the earliest 32°F fall event in the comparable 30 year period. It should be noted that at Scottsbluff and North Platte, airport locations only reached 34°F.

It wasn’t until October 13th that a cold front moving through ended a long stretch of above normal temperatures and brought frost and hard freeze conditions to the northwestern two-thirds of the state. Across the Panhandle, the first 32°F frost date occurred 14 to 26 days later than the 1991-2020 average and 6 to 15 days later than average for the first 28°F freeze. In terms of ranking compared to 1991-2020 period, every Mesonet station ranked between 4th latest to the latest 32°F first fall occurrence and 2nd to 10th latest 28°F first fall occurrence.

The cold air failed to push into the eastern half of the state and it took and additional week before another cold front moved through Nebraska and brought frost conditions to the remainder of the state not impacted by the 10/13 to 10/16 frost/freeze event. Areas along and south of I-80 failed to reach 28°F east of Kearney, although widespread minimum temperatures of 29° to 31°F were observed.

When put into comparison context to the 1991-2020 period, stations reaching their first 32°F fall event were 10 to 15 days later than average and 4 to 15 days later than average for the first 28°F fall event. It is very likely that areas prone to cold air drainage likely reached hard freeze criteria, but the NSCO Mesonet siting criteria attempts to avoid these locations when installing an automated weather station.

The next surge of cold air into the state occurred November 2nd to the 4th and the first fall hard freeze event was recorded across the northeastern Sandhill region and most of northeastern Nebraska. When ranked against the 1991-2020 data, every Mesonet station in this region recorded the latest to 5th latest first fall hard freeze. A strong surge of cold air November 12th to the 14th entered the state and brought an end to the growing season for those stations that had failed to reach 28°F yet this fall. When placed in context to the 1991-2020 period, all of these Mesonet locations recorded their latest to 5th latest first 28°F fall freeze date. The same locations received their hard freeze between 14 to 23 days later than the 1991-2020 average hard freeze date.

The table below is meant to provide a representation of how individual Mesonet locations across the state compare to the 1991-2020 Normal period (The will be our comparable baseline until 2031). This table provides the date of the first fall occurrence of 32 F and 28 F, along with how many days the event was ahead or behind the 1991-2020 average frost and hard freeze dates. A positive value indicates the event occurred later than average and a negative value indicates an earlier than average freeze date.