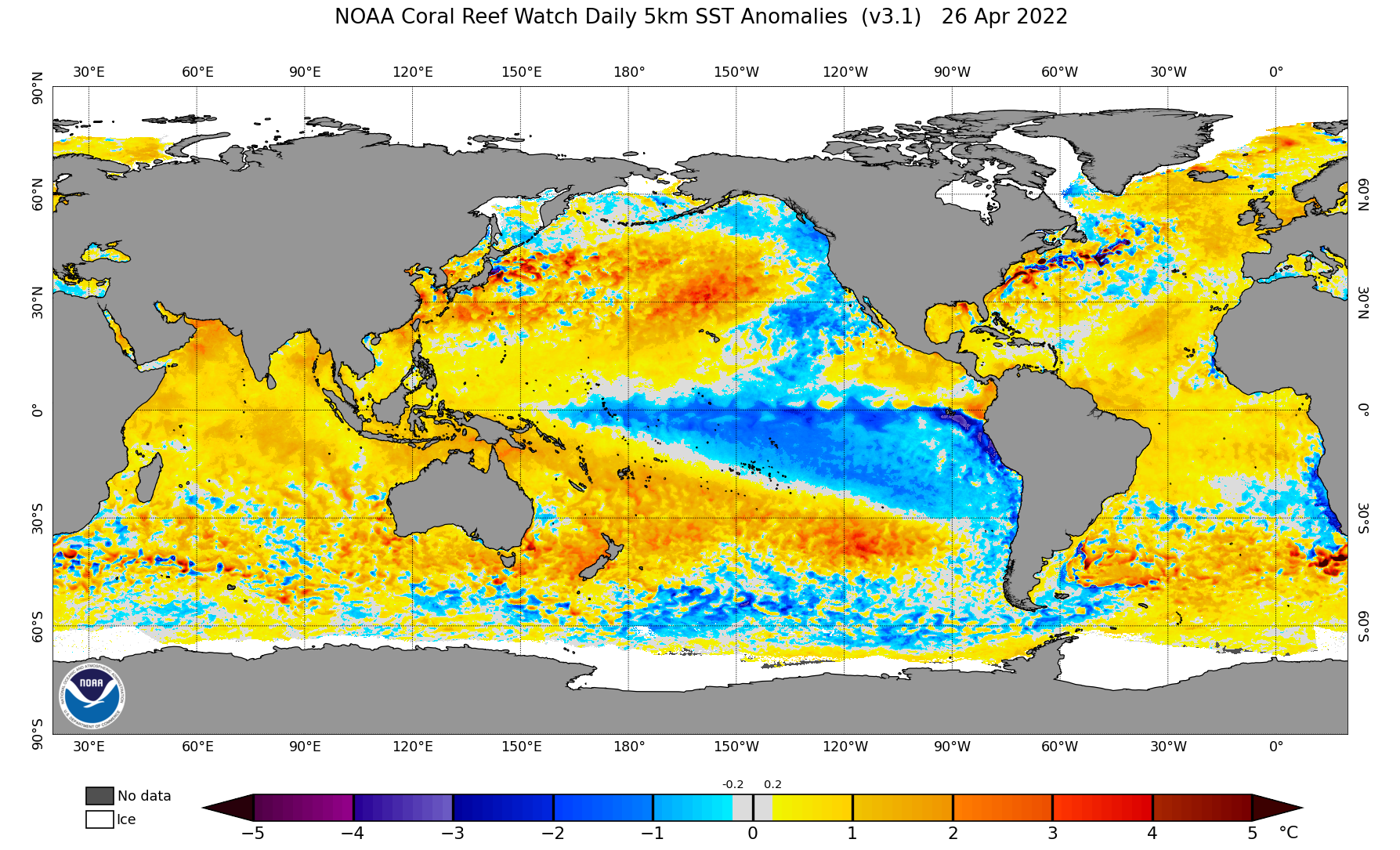 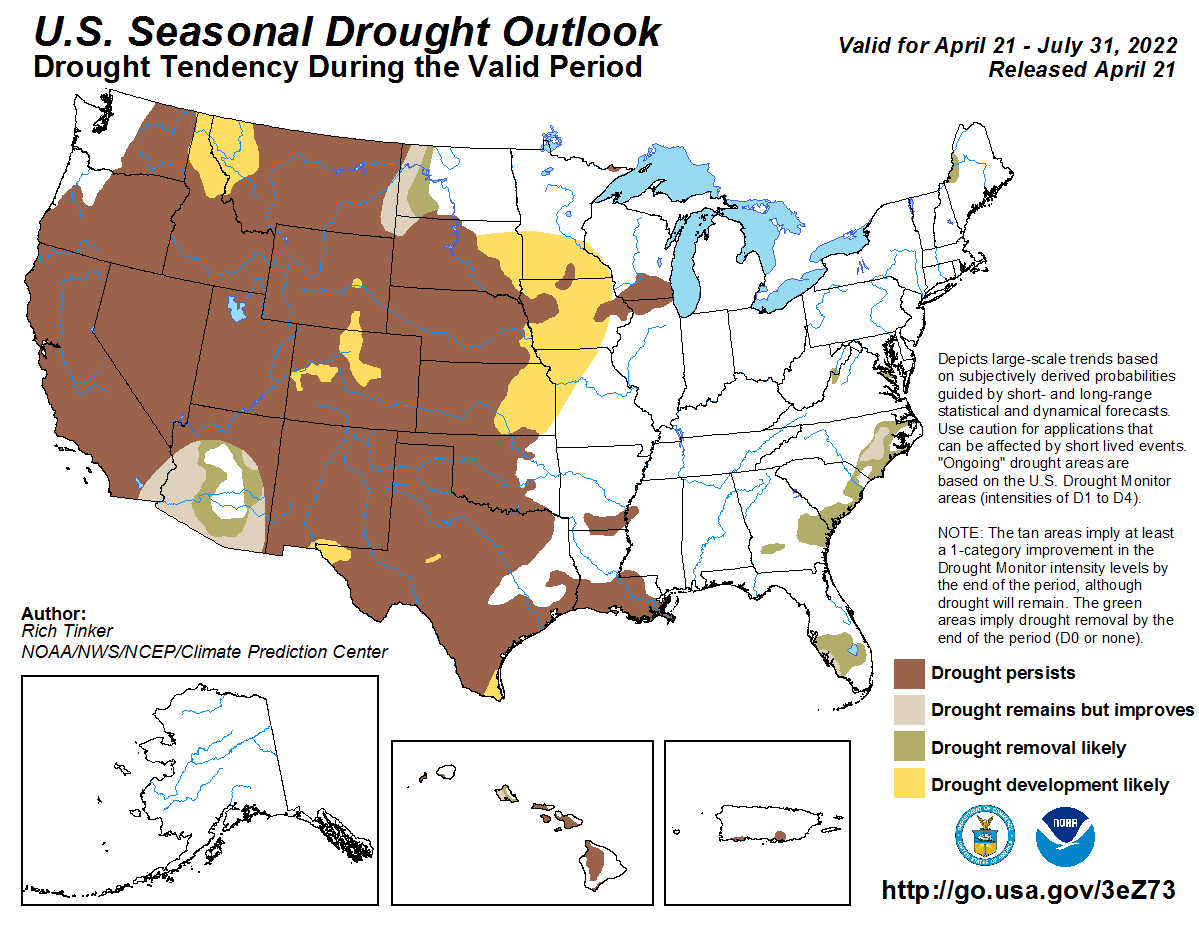 La Nina conditions are still persistent across the Equatorial Pacific and the Climate Prediction Center (CPC) has placed the odds of this event continuing through this upcoming summer (June – August) at 59% and a 50-55% chance that these conditions will persist through this fall (September – October). A look at the most current Sea Surface Temperature (SST) anomalies (Figure 1) indicates that a colder than normal temperatures continue to persist from Peru westward to just east of Papua New Guinea.

A pulse of warmer than normal water beneath the central Equatorial Pacific worked its way to the surface in early March and brought above normal SST’s into the eastern Pacific north of the Equator. This pulse of warm water has been mitigated over the past three weeks by another anomalous cold pool working toward the surface. An animation of this trend can be found in Figure 2 and it indicates that another warm pool is building eastward under the central Equatorial Pacific.

CPC’s forecast favoring continuing La Nina conditions is based upon their in house climate model that is colder than the consensus of global dynamical and statistical models. The consensus models point toward La Nina conditions ending as the summer season begins (Figure 3). In fact, two of the three coldest models are products from NASA and the National Center for Environmental Prediction (NCEP). This is important in regards to the CPC seasonal outlooks because their greatest accuracy occurs when La Nina or El Nino events are ongoing.

The most recent seasonal drought forecast (Figure 4) favors the expansion of drought conditions from the central High Plains into eastern Kansas, northwest Missouri, Iowa, eastern South Dakota and southern Minnesota. Since this most current outlook is directly tied to CPC’s 3-month precipitation outlook, it should be no surprise that CPC favors above normal temperatures (Figure 5) and below normal moisture (Figure 6) for most of the central and southern High Plains region (Nebraska southward through Texas).

Since CPC also favors La Nina conditions through the summer and into this fall, their temperature and precipitation outlooks also favor warmer and drier than normal conditions across the central High Plains for the same time period. CPC indicates that above normal temperatures are favored for Nebraska through the July-September time frame, while below normal precipitation is favored to last through the August-October time frame.

With ongoing drought intensification due to persistent dryness from November through present across the western 4/5 of the state, CPC’s outlook would suggest that much of the state will continue to deteriorate as we move through the upcoming growing season. If the consensus statistical and dynamical forecasts in Figure 3 verify, then abnormal warmth and dryness currently forecasted by CPC may be overly aggressive for the next six months.

Recent storm activity has resulted in significant snow activity during the past two weeks across the Dakota’s, eastern Montana and northeastern Wyoming. Much of central and western North Dakota have received 30 to 50 inches of snowfall during this period, while most of Nebraska has failed to receive normal moisture during the same time frame and excessively strong winds that have fueled widespread wildfire activity.

The persistent colder than normal temperatures this month have slowed down vegetative dormancy break across the western, eastern and northern corn belt. Air temperatures aloft are also colder than normal and should persist through at least the month of May. If we can continue to see atmospheric troughs moving through the western United States, there should be enough cold air aloft to create unstable atmospheric conditions and periodic bouts with severe weather and more widespread precipitation events across Nebraska prior to the official start of summer.

I continue to be optimistic that Nebraska will see some relief from drought conditions over the next 30 days. However, due to very dry topsoil and subsoil conditions, timely rainfall events will be required through late August to escape significant drought damage for dryland farmers and ranchers. There is respectable chance for widespread moderate to heavy precipitation (1-2 inches) with the storm forecast to move across the state Friday and Saturday. Unfortunately, it will take many of these events to make up for the lack of precipitation over the past six months.

Two weeks ago, there was a lot of chatter about a repeat of 2021 drought conditions across western North Dakota and eastern Montana. Now complaints have shifted 180 degrees to worrying whether crops will get planted due to wet and cool conditions. That is how fast conditions can change when an area is in a favorable position relative to the prevailing storm track. Hopefully, this weekend’s storm system marks Nebraska’s opportunity to begin a sustained wet trend.