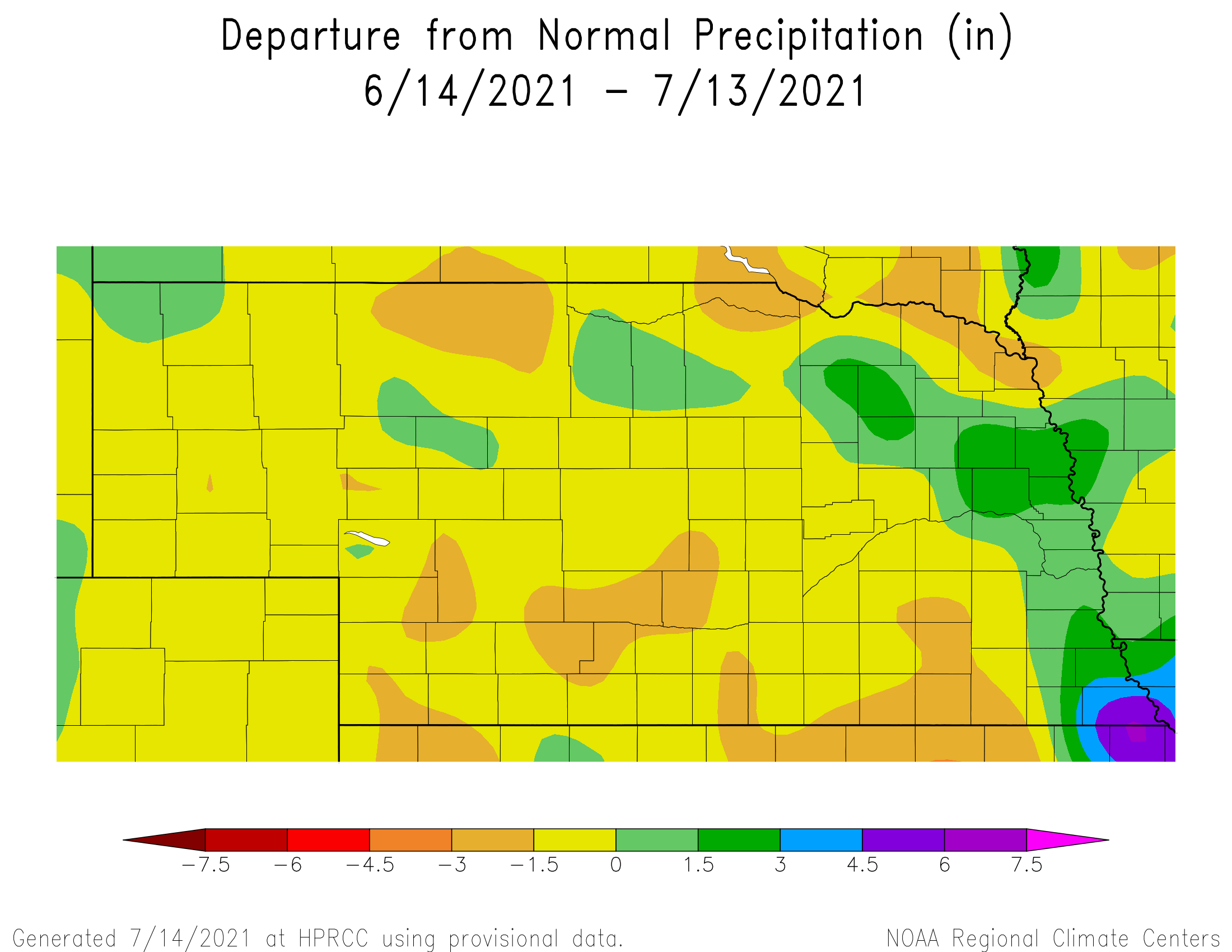 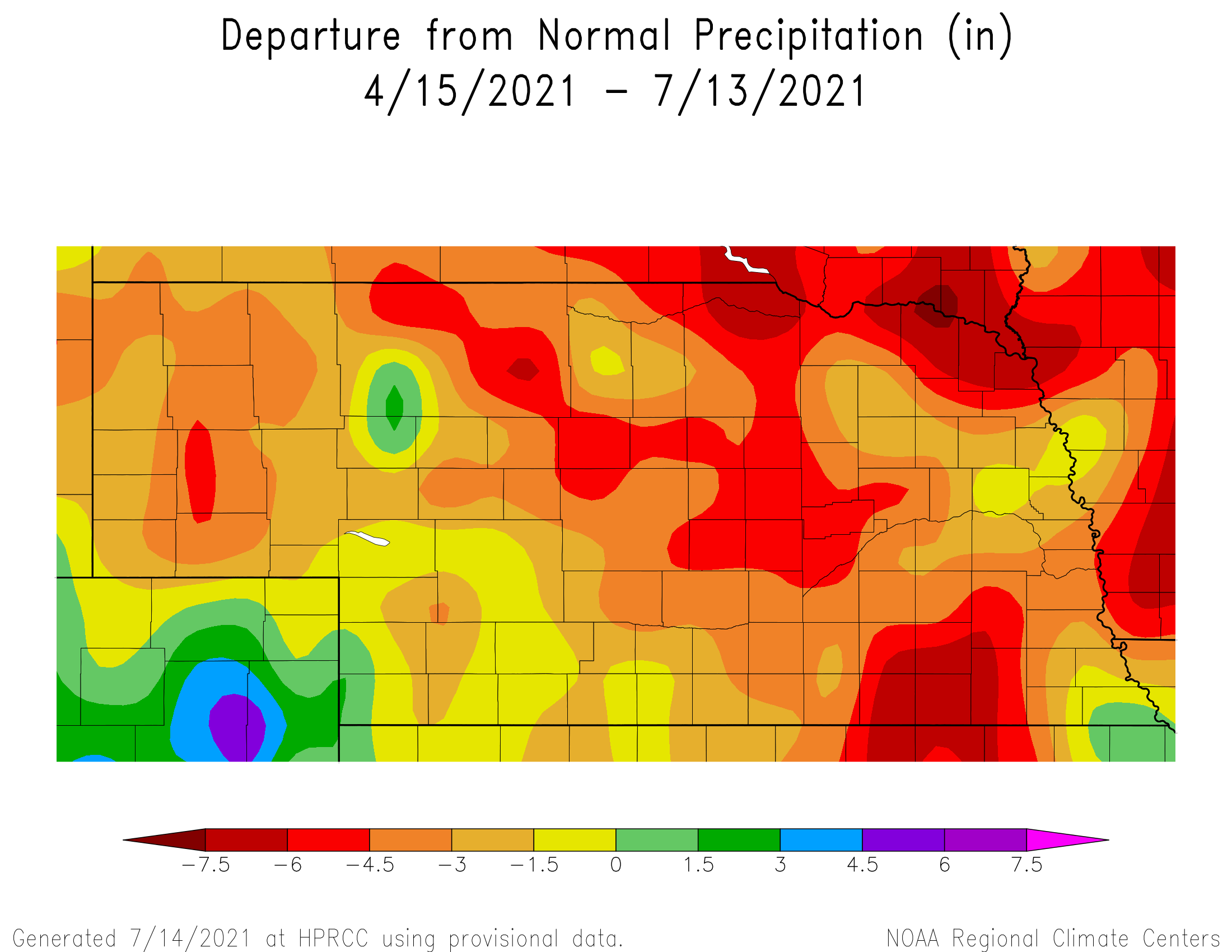 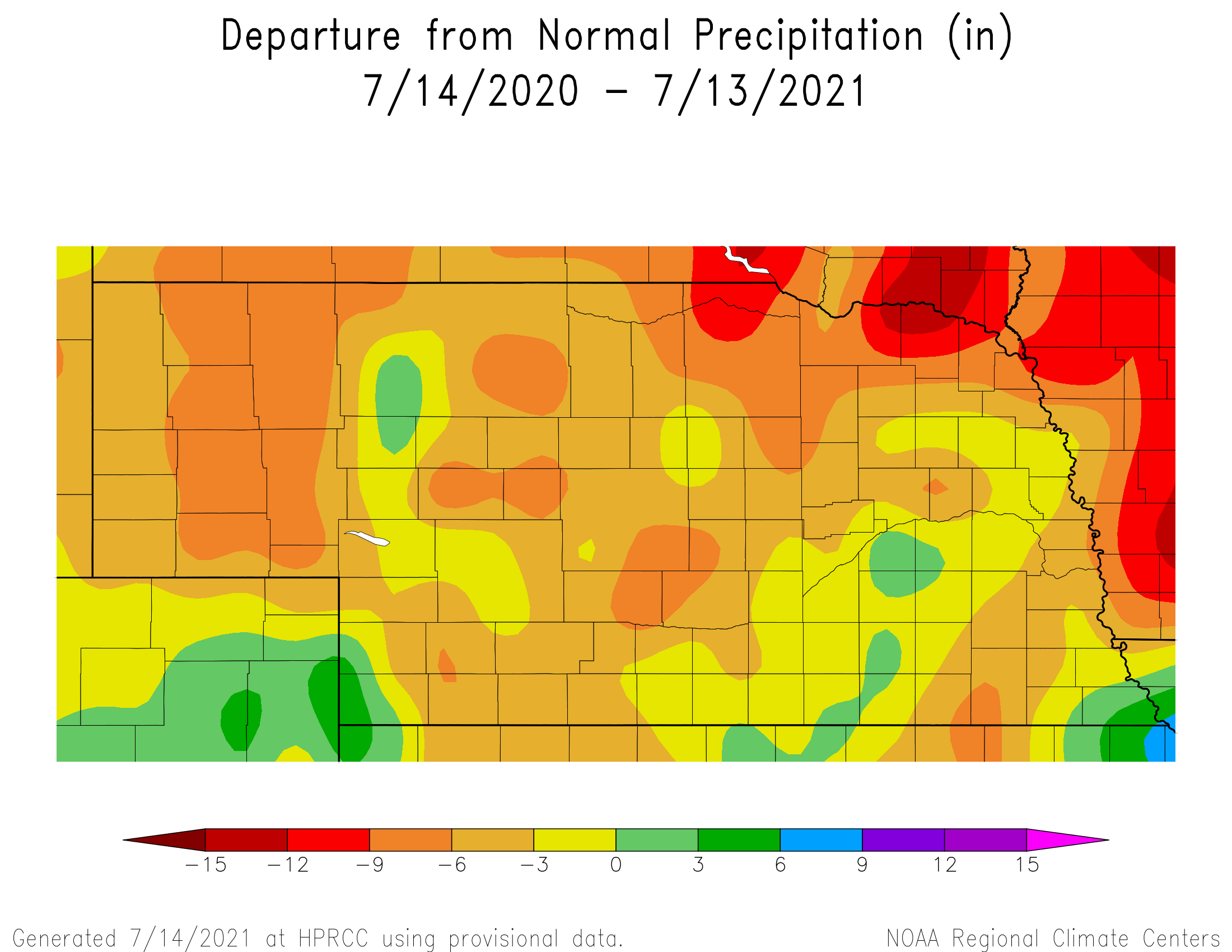 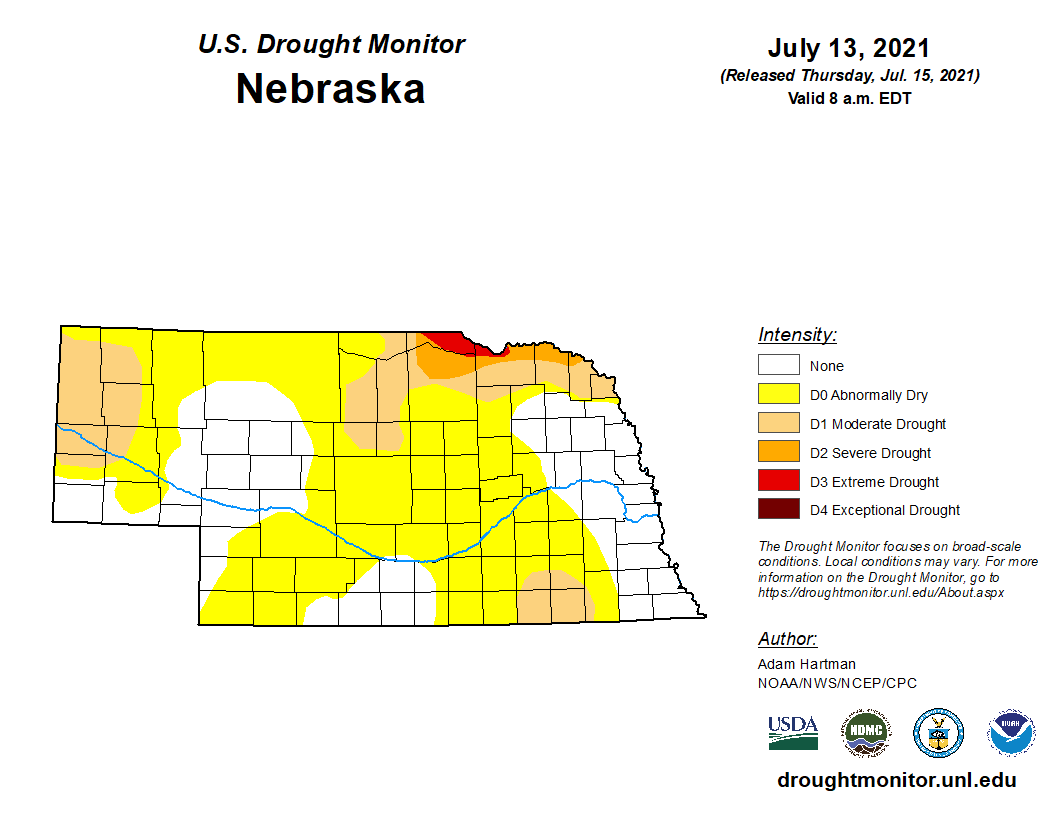 We have now passed the midpoint of 2021 and it is time to take a look at where we stand in relation to drought concern now that warm season crops have entered their critical reproductive cycles. As of July 11 Nebraska Agricultural Statistics Service (NASS) indicated that 46% of the soybeans were blooming and 2% were setting pods, 19% of the corn crop had reached the silk stage and 2% of the sorghum crop was headed out.

Over the next month these three crops will be in their greatest water use period and crop stress can rapidly develop under a precipitation free period. Under normal temperatures, daily crop water use for these three crops will range from 0.25 to 0.30 inches/day. If maximum temperatures move into the middle 90’s or higher, these daily values can jump up to 0.30 to 0.40 inches/day, especially across the western 1/3 of the state where dew point temperatures consistently average 5 F cooler than eastern Nebraska.

Weekly crop water use for corn, soybeans, and sorghum from mid-July through mid-August under normal conditions will average 1.75 to 2.10 inches. This increases to 2.10 to 2.80 inches when daily high temperatures are consistently above 95 F with sunny skies and wind speeds over 15 miles per hour. Depending on climatic (temperature, wind speed, solar radiation and dew points) conditions, these crops will require between 3.50 and 5.50 inches every two weeks.

Our clay loam soils hold an average of two inches of available water per foot of soil or 10 inches when these soils are at field capacity. Under normal climatic conditions and a full 5-foot column of our best soils, a two week precipitation-free period would draw down the available moisture in the soil column by 30 to 40 percent. This increases to 40 to 55% if maximum temperatures persistently stay above 95 F during the period. Unfortunately, sandy loam soil hold about 50% less available water per foot which means under similar climatic conditions, soil moisture loss will be twice as fast compared to a clay loam.

Average weekly precipitation for the next month is about 0.60 inches across the Panhandle to nearly an inch across the eastern ¼ of the state. Thus, even under normal precipitation, weekly crop water use at this time of the year will result in a net loss of soil moisture over a seven day period. For soil profiles to gain moisture at this time of year will require two inches of precipitation under normal climatic conditions and over 2.50 inches when maximum temperatures exceed 95 F on a regular basis.

The percentage of corn, soybeans, and sorghum in good to excellent condition were in the high 80’s at the beginning of June and have been weakening ever since according to NASS. The most current crop ratings as of July 11 have 77% of the corn crop, 79% of the soybean crop and 80% of the sorghum in good to excellent conditions. Corn dropped 5 percentage points over the last week, sorghum dropped 3 percentage points and soybeans one percentage point. The recent dry conditions and severe weather this past weekend fueled the corn rating decline and further declines are expected in next week’s crop report due to having a better assessment of the extent of recent storm damage.

Much of the storm damage reported over this past weekend occurred across areas of the state that have been persistently dry over the past 30 and 90 days. Although numerous pockets of 1-3 inches of rainfall were reported across eastern and northern Nebraska this past weekend, they were also accompanied by wind gusts in the 50-90 mph range and hail from pea to softball size. Even with the uptick in precipitation across northern Nebraska, significant precipitation deficits have accumulated during the past 30 through 90 day periods.

Thirty day precipitation deficits over the past 30 days depicted in Figure 1 show deficits through yesterday morning of 1.50-3.00 inches in pockets of southwest, central, north central, southeast and northeast Nebraska. These deficits are even greater at the 90 day time frame and Figure 2 indicates that precipitation shortfalls of at least 3.00 inches most of the northeastern ½ of the state. These deficits increase into the 4.50 – 6.00 inch range across in pockets of north central, southeast, east central, and northeast Nebraska. Precipitation deficits exceed 6 inches across the eastern half of Knox county.

Precipitation from storm activity that occurred during the evening of July 14 through the morning of July 15 is not included into Figures 1 and 2, but preliminary analysis of NeRain observer data indicates between 1 and 2 inches of moisture fell north of the Niobrara from north central through northeast Nebraska. This will reduce 30 day precipitation deficits by 30 to 60 percent (location dependent) and 90 deficits by 15 to 30%.

Long term deficits accumulated over the last 12 months are shown in Figure 3 and precipitation deficits of 6-9 inches across the eastern 2/3 of the Panhandle and the northern ½ of northeastern Nebraska. Isolated pockets of similar deficits exist in the Lexington, Fairbury, Mullen and southeastern Cherry county areas. Outside of a small region from south central through east central Nebraska where surplus anomalies exist, most of the remainder of the state has 12 month precipitation deficits in the 3 to 6 inch range.

The latest U.S. Drought Monitor depiction of conditions through July 13 (Figure 4) indicates moderate drought (D1) conditions exist across the west central and northwest Panhandle, the northern ½ of northeast Nebraska and the Fairbury area. Severe drought (D2) conditions have been assigned to the south side of the Niobrara river basin north and east of Ainsworth. Extreme drought (D3) covers a small region north of the Niobrara in Boyd and Knox counties.

These long term deficits are likely being underrepresented by the U.S. Drought monitor in my humble opinion. The intense dryness during the second half of last summer depleted soil moisture reserves in the top 5 feet of the soil column and plant available moisture in mainly confined to the top three feet across the Panhandle, southwest and the northern 1/3 of the state. Timely rainfall events will offset this dryness to some extent, but two weeks of precipitation-free weather and these long term deficits will become important as rain fed crops will use up moisture reserves that currently exist and crop stress will become more apparent and widespread.

The GFS model has been advertising for almost two weeks that the ridge responsible for the intense heat across the western United State will be pushed eastward over the next 10 days in response to an upper air trough that is projected to build into the Pacific Northwest. As this trough deepens it is forecast to push the northern extent of the ridge into the northern Plains and south central Canada. At present the GFS model indicates that July 18-25 will be the period when this ridge will be at peak strength over the nation’s mid-section.

The worst of the heat currently in the forecast for next week is being projected to occur just to our north where much drier surface conditions and the lack of low level moisture will allow air temperatures to heat up quicker than the central Plains where dew point temperatures will be 5 – 10 F higher. That being said, the western 1/3 of Nebraska is likely to see at least several days where maximum temperatures push into the upper 90’s to low 100’s.

Based upon the July 15 morning run of the GFS model, the upper air ridge over the Great Basin will push eastward this weekend and early next week. As the ridge slowly shifts east and north, several pieces of energy are forecast to move on the periphery of this ridge July 17-19th, which currently gives the central third of Nebraska the best opportunity to receive moisture. That being said, the maximum moisture currently projected for the next week is 0.50 – 1.00 across central Nebraska, but less than 0.25 inches for the western 1/3 of the state and the eastern tier of counties along the Iowa border.

From July 15 – 22 the GFS model forecast indicates the eastern half of the state should remain in the mid 80’s to low 90’s while upper 80’s to middle 90’s is expected across the western half of the state. The GFS does hint that upper 90’s to low 100’s could develop for western Nebraska July 21-25 and low to mid 90’s for eastern Nebraska. From July 26-30, the GFS hints that the upper air ridge will begin to weaken and maximum temperatures statewide should cool back into the 85-92 F range with scattered thunderstorm activity July 25-29.

If past history is any guide to what we may experience for August weather, then expect the roller coaster ride between distinct periods of above and below normal temperatures to continue. There has been no upper air pattern that has locked into place this growing season. We have persistently moved from upper air ridging to upper air troughing every 10-14 days across the central Plains.

If the upper air trough forecast to build into the west coast over the next 10 days materializes, monsoon moisture will be pulled northeastward into the central Rockies. It has been a very good monsoon moisture season so far in the southwestern U.S. desert region and this trend should boost atmospheric moisture available to waves of energy ejecting of the western U.S. trough.

Hopefully this action will translate into respectable precipitation events in early August which would boost soybean and corn yield prospects. However, if the GFS is being overly aggressive with monsoon moisture during early August then it is likely that drought expansion will occur rapidly due to the depletion of soil moisture reserves.

So these next few weeks will play a substantial role on where our warm season crop yields and total production number eventually end up when harvest is complete. We have the potential for above normal warm season crop grain yields given favorable precipitation going forward. On the flip side, we also have the potential for significant yield hits if hot temperatures continue into early August and the precipitation events currently forecast fail to materialize.

It is a little early to go out on a limb to forecast fall harvest weather, especially considering the uncertainty that exists with the remainder of this growing season. That being said, the Climate Prediction Center (CPC) issued a La Niña watch last Thursday when the released the monthly El Nino Southern Oscillation (ENSO) outlook. CPC indicates that the odds of La Niña development based upon their models stands at 51% for the September – November period, increasing to 66% for the December – February period.

There are some subtle signs of cooling below the Equatorial Pacific and this will need to strengthen during the month of August to convince me that CPC has the correct thinking in regards to this event. The warm pool anomaly below the surface from Australia to South America has weakened over the past 30 days, but still remains in place. This suggests to me that the movement toward La Niña conditions will be slow to unfold.

How rapidly, if at all, La Niña conditions develop will determine whether the typical warm and dry harvest weather develops across the western corn belt. If La Nina development doesn’t occur until the second half of the fall or later, I would expect that precipitation events will be more widespread and frequent than what we experienced last year. An update of CPC’s La Niña watch will be released in mid-August after CPC makes their latest model forecasts available to the public.