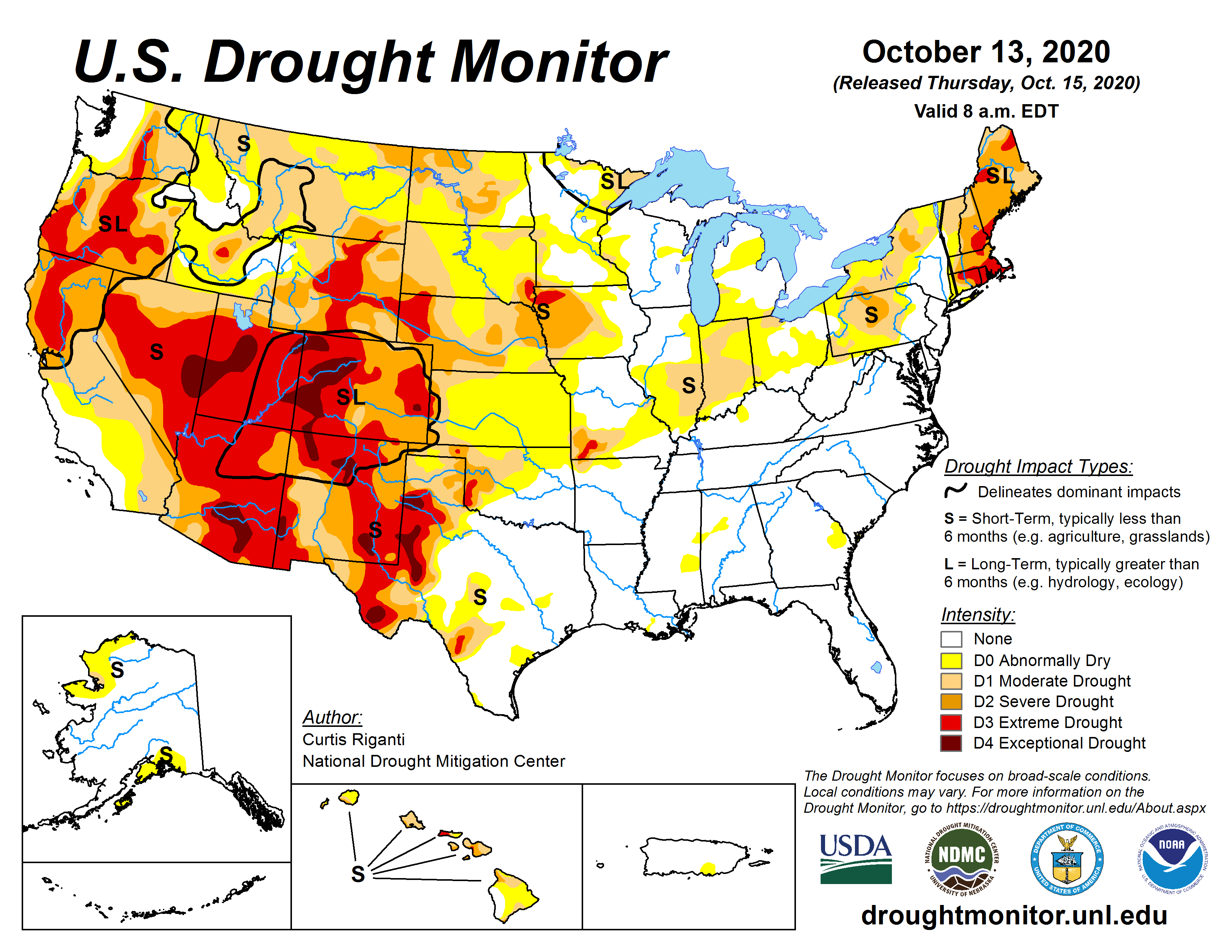 La Niña conditions in the Equatorial Pacific (Figure 5) are driving the CPC winter outlook. Sea Surface Temperature (SST) anomalies are well below normal from South America westward to the eastern edge of the Polynesian Island chain. CPC’s winter outlook is heavily biased toward the typical La Niña patterns experienced across North America. This event has strengthened rapidly the past four months and is now close to the criteria needed to be classified as a moderate intensity event. The consensus forecast of global models is that this event will strengthen slightly in to December before beginning the process of dissipation by late next Spring.

Statistical correlations to past La Niña events show a strong bias toward drier than normal conditions south of Nebraska. Winter moisture represents less than 10% of Nebraska’s annual totals, so regardless of whether CPC is correct or not on their winter outlook, the drought signature currently depicted for the southern and central High Plains region (Figure 6) will likely continue through the winter. Even if this upcoming winter is toward the wetter end of historical patterns, no more than a one category improvement on the U.S. Drought Monitor should be expected.

I think CPC is right on target with their winter outlook. If I have any differences in regards to the temperature outlook, it would be to bring the below normal anomaly currently depicted for the northern High Plains further southward into eastern Nebraska and all of Iowa. This is where the present trend of cold fronts moving southward the past 45 days has concentrated the core of the cold as upper air troughs move across southern Canada and intensify as they move into the western Great Lakes region. As these upper air troughs deepen, cold air from Canada is pulled southward across the central United States.

If this same scenario continues into the early winter, there will be frequent Alberta Clippers pushing southward into the central United States. Unfortunately, these systems are quick movers containing brief shots of snow (1-3 inches common) that are light, fluffy and contain below normal moisture content. The National Oceanic and Atmospheric Administration (NOAA) has analyzed snowfall patterns during La Niña winters across North America and the stronger the event, the lower the probabilities are that above normal snowfall will impact Nebraska. It should be noted that NOAA shows the strongest probabilities for below normal winter snowfall occur across the southern Panhandle and southwest Nebraska. The best opportunities for significant snowfall in this region occurs when the cold air surges southward along the front range of the Rockies (similar to the Labor Day week storm system), which induces upslope flow conditions due to orographic lift.

Below normal temperatures across Nebraska and the northern Plains during La Niña winter boils down to the extent of snow cover from central Canada southward into northern Montana and North Dakota. During moderate and strong La Niña events, above normal snowpack conditions reduce the likelihood of air mass moderation before they surge through Nebraska. If snowfall is below normal in this region, then the probabilities shift toward an above normal temperature winter for the entire High Plains region from North Dakota southward through Texas because these air masses will moderate (warm) as they push southward over snow free surfaces. If a good snowpack doesn’t develop to the north of us by early December, then it is likely that winter temperatures will push toward the warm side of average, especially across the western third of the state.

The major uncertainty that I have in regards to the winter forecast boils down to the second half of the winter. Looking beyond the cold signal in the Equatorial Pacific (Figure 5), you will notice a small anomaly of below normal temperatures just south of the eastern end of the Aleutian Island chain. This is where the mean upper air low is situated in the Gulf of Alaska. There is an expansive area of above normal SST’s to the east and south of this cold pool. There is ample warmth and moisture east of the mean low pressure area to keep storms active and strong through the winter. If this area of low pressure slowly builds eastward during the winter, below normal SST’s should develop during the second half of the winter in the eastern Gulf of Alaska.

Why is the movement of the Gulf of Alaska upper air low important? It pushes the upper air ridge eastward and directs the flow on the front side of this ridge toward the Great Lakes and northeastern United States. This scenario would help strengthen high pressure aloft over the southeastern U.S and allow more upper air low pressure energy to enter the Pacific Northwest. These upper air troughs would be forced southeast toward the central Rockies instead of being deflected eastward toward the northern Plains. Energy that can dig into the central Rockies has a greater ability to pull Gulf of Mexico moisture into the central Plains, which generally translates into wetter and heavier snowfall patterns for Nebraska and Kansas. If this process develops, the period from late January through March would present the best opportunities this winter for heavy snowfall events.

So in short, I expect that the first half of the winter will be dominated by Arctic surges east of the Rocky Mountains, leading to frequent intrusions of bitter air. However, when the upper air trough weakens, a return to above normal temperatures should be expected as the atmosphere reloads to start the same pattern anew (like we have seen most of this fall). I also expect that the second half of the winter will bring better opportunities for snowfall as low pressure energy from the Gulf of Alaska pushes into the Pacific Northwest and moves into the central Rockies. There would still be occasional bouts of Arctic air on the backside of the surface lows that move into the central Plains, but Nebraska would experience more time under southerly flow in advance of these northeasterly moving systems.

If our late winter period becomes active, coupled with a weakening La Nina, early spring conditions will likely be cooler and wetter than normal. If the second half of the winter fails to produce active weather across the northwestern quarter of the United States, warm and dry conditions are likely during the first half of the spring. I have provided several links below to help you understand how past La Nina events have impacted precipitation, temperature, and snowfall during the winter months. In addition, I have also provided a link to current La Niña conditions which also contain an excellent primer on where La Niña anomalies occur globally at a 70% or greater occurrence level. Enjoy.

October 2020 La Nina Update and Typical Anomalies across the Globe