The Nebraska Climate Summit brought together leading experts in climate, health, agriculture, public policy and planning, and put them in a room March 21 at Nebraska Innovation Campus. That room was full of their key stakeholders — Nebraskans.

For an entire day, they talked about climate change, what changes people are likely to see in their lifetimes and what researchers are doing to help inform the issue and potentially foster change. In the audience were people of all ages, from a multitude of industries, with a diverse set of experiences.

“This was a great opportunity to bring together people to learn more about the multitude of efforts going on in Nebraska surrounding climate and climate change,” said Tyler Williams, Nebraska Extension climatologist and co-organizer of the event. “It is so often people get in their own bubble and focus on their own interests, so having this wide-ranging summit hopefully provided a glimpse into something new for everyone.”

Participants were given a crash course in Fourth National Climate Assessment; learned about Nebraska’s weather and water monitoring programs; heard about new technology in planning for worst-case climate scenarios; learned about current research and monitoring opportunities in the agriculture industry; focused on public health in the face of warmer temperatures; and learned how municipalities are preparing for changes in climate.

“The summit was the best one of this type I have attended over nearly a decade of being involved in state climate change efforts,” wrote Kim Morrow, of Verdis Group, after the summit. “I was riveted the whole day on really interesting, original research and practices I had not seen before that have been created in and for our region.

“Together we are becoming much more sophisticated in talking about climate impacts to our area, and thus are helping to build our state's resiliency to what lies ahead.”

It is the hope of Williams and Martha Shulski, event co-organizer and director of the Nebraska State Climate Office, to keep those conversations going in the future with stakeholder and industry groups across the state.

“Climate change is affecting us now,” Shulski said, “and the effects go beyond the immediate impacts.”

With discussion, with planning, she knows Nebraskans can tackle climate changes issues facing the state together.

The Nebraska Climate Summit was livestreamed. The videos are now available on our YouTube channel.

Our speakers also made their presentations available below. 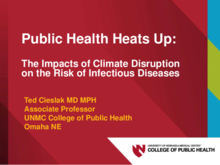 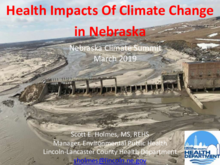 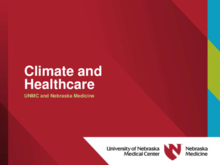