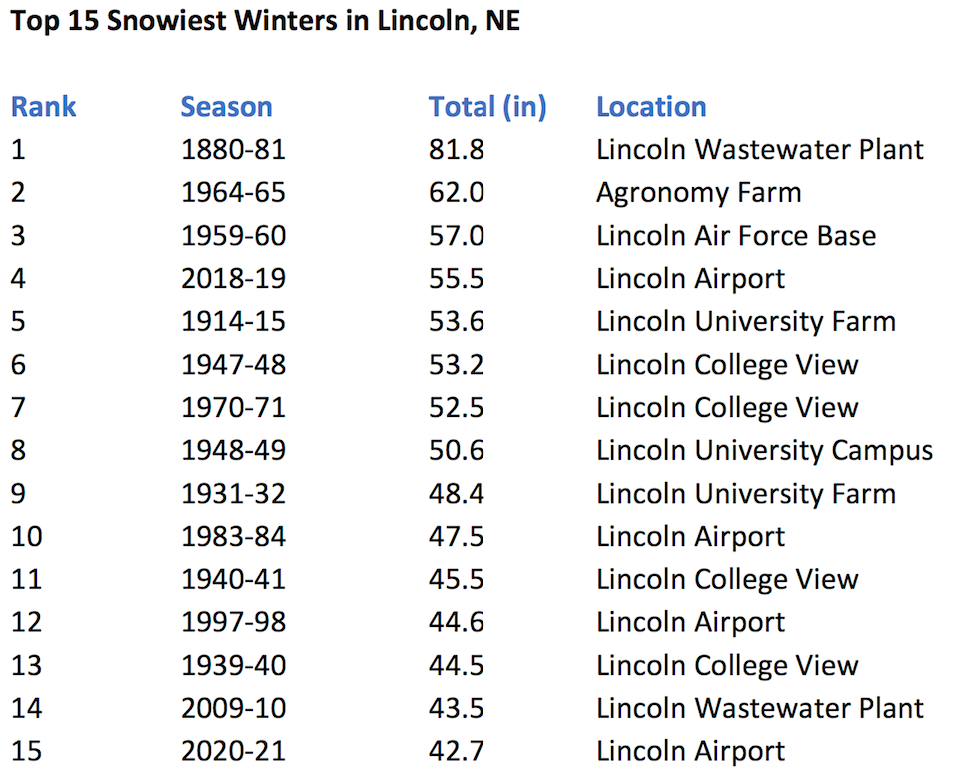 The Arctic air intrusion advertised by the weather models for this past weekend came to fruition and continues to hold its grip on Nebraska. Several pieces of energy swung through the state on the backside of the upper air trough responsible for this late winter surge. After a very active snow season from late December and January, the snowfall this past weekend pushed Lincoln into the number 15 position for seasonal snowfall.

The last time we experienced such a snowy pattern in Lincoln was February 2018, which was followed by severe flooding during Early March. If there is any good new to be found with this season’s snowfall accumulation, it can be found in the fact that soil temperatures in areas that carried snow cover prior to the Arctic air arrival remain unfrozen. This will lessen the risk of runoff given a quick warm up, but rivers and streams are likely to accumulate significant thickness before temperatures moderate the last third of the month, increasing the likelihood of ice jams regardless of runoff from snow melt.

The 2020-21 seasonal snowfall total through February 8th has moved up to the 15th highest total in history. With the GFS model indicating another strong polar surge arriving Thursday and Friday of this week, it appears that most of the state will see accumulating snowfall. In fact, there appears to be an elevated chance for widespread moderate to heavy accumulations from central Nebraska southward through most of Kansas. Snow to liquid water ratios are expected to be in the range of 20-30:1. Therefore, a quarter inch of melted moisture will produce 4-6 inches of accumulation.

If the forecasted moisture materializes for the end of this week, it is likely that the 2020-21 seasonal total will move up into the top 10 ranking. Furthermore, the GFS model is indicating that the potential exists for the development of a late winter storm moving out of the western United States the final full week of the month. If these forecasted events materialize, there is a good possibility that 2018-19 winter totals will be eclipsed before. The 1880-81 record remains far out of reach, but there are serious questions concerning the validity of measurements given there were no standard measurement techniques are the time.