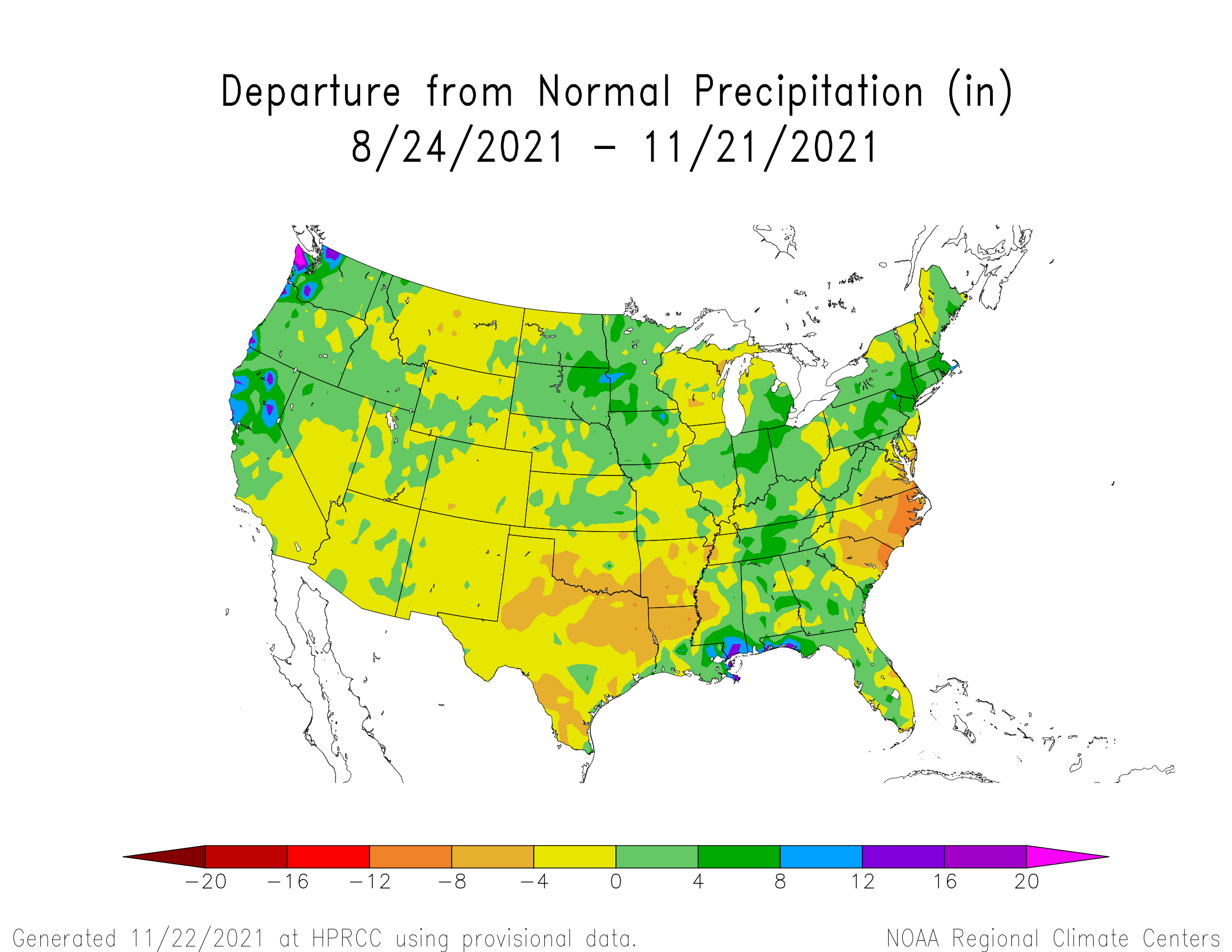 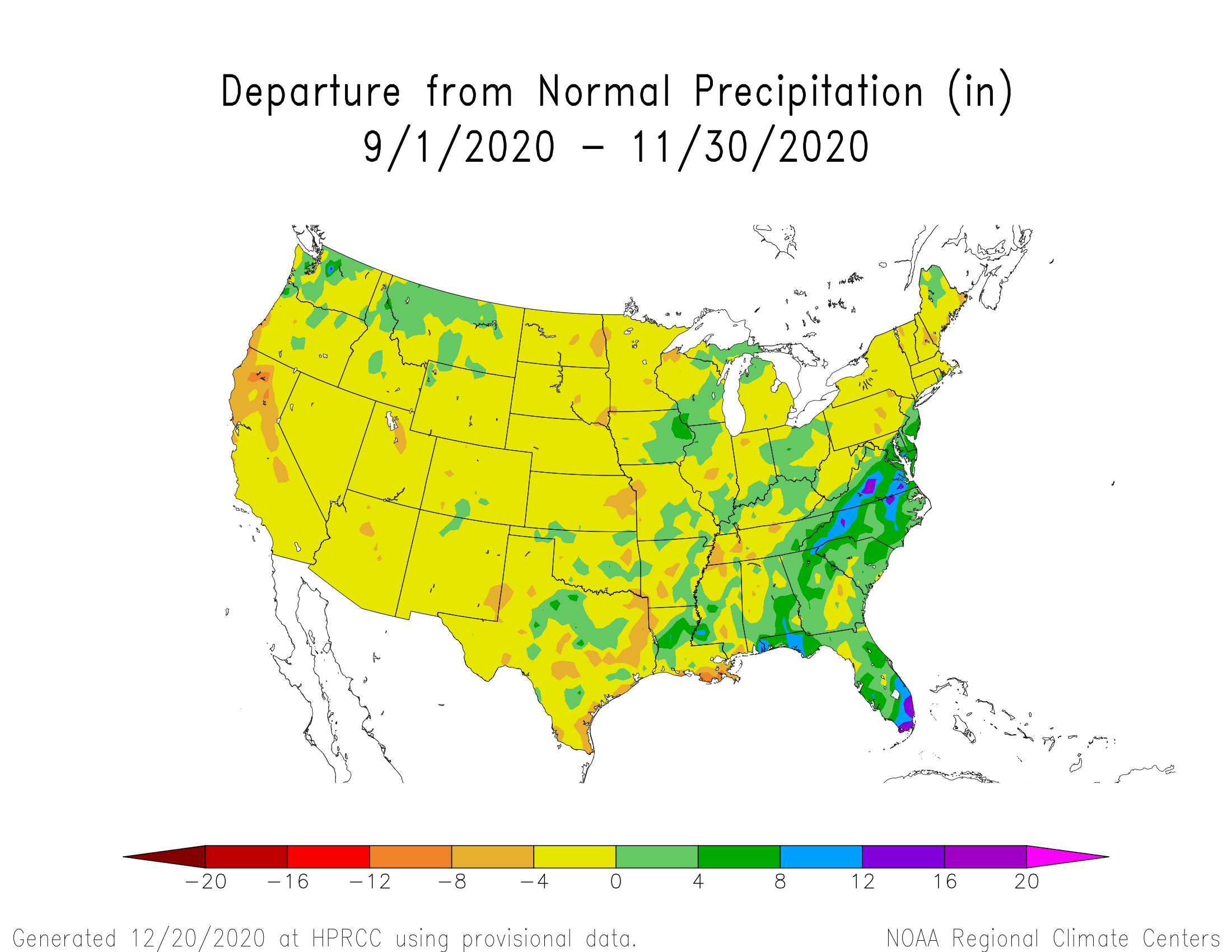 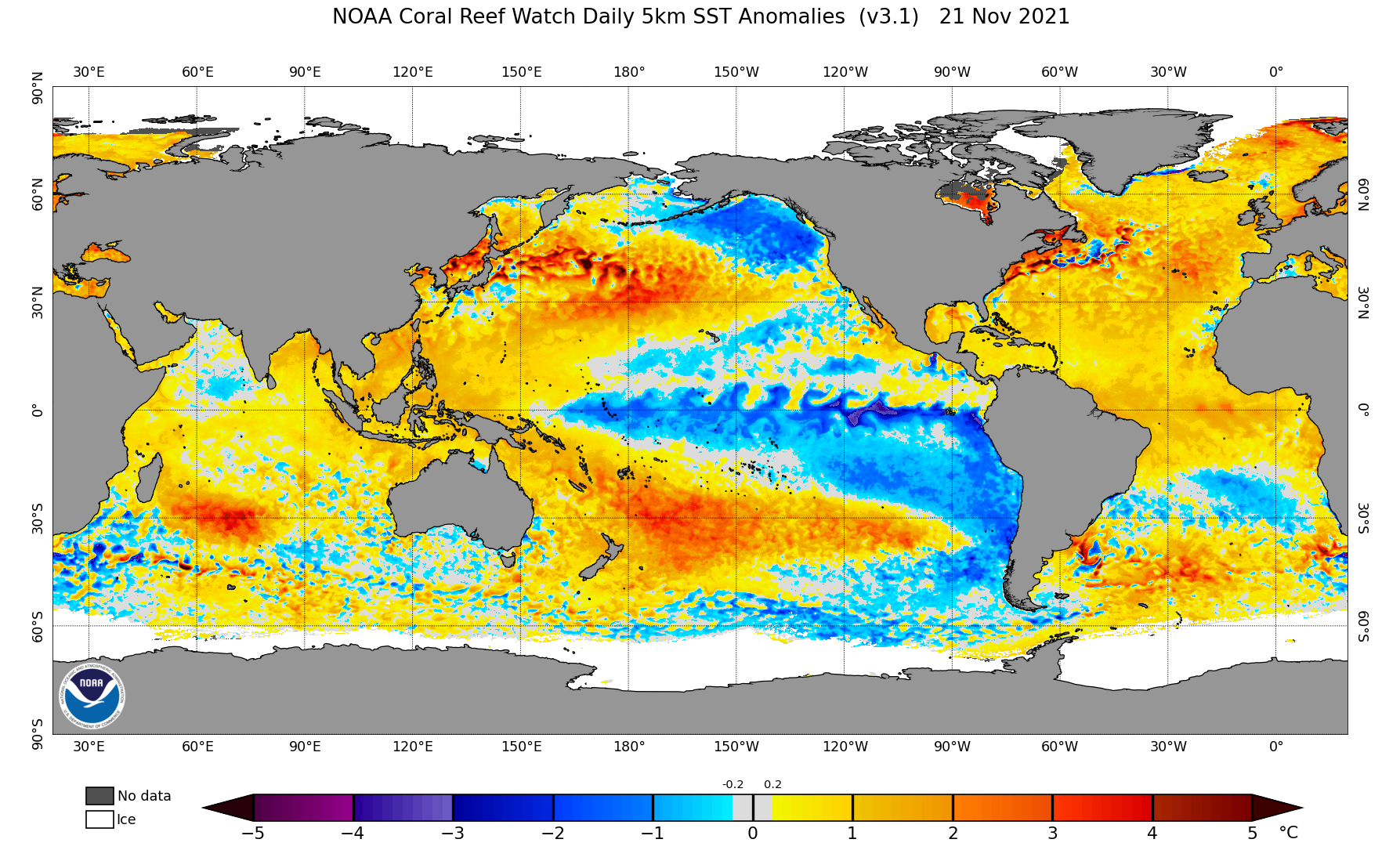 The biggest question going into this winter is whether the anomalous precipitation pattern that developed across the High Plains last winter will be replicated once again. Based upon pure statistics, last winter should have trended toward below normal temperatures and above normal moisture across the northern High Plains (MT, ND, SD). However, the primary storm track created a split flow pattern that favored the southern stream and subsequent storm activity passed through the southern half of the High Plains region (TX, OK, KS, southern NE).

The weather pattern this fall has been more active for the northern Plains (Figure 1) then during the fall of 2020 (Figure 2). A wet pattern has been firmly established across the eastern Dakota’s, eastern Nebraska, Minnesota and the northern ½ of Iowa. To our south, dry conditions can be found from Kansas southward, with strong dryness noted across eastern Texas and Oklahoma. Average temperatures are also polar opposite of last fall across the High Plains with anomalies running 3-6 F above average from Texas northward through North Dakota. Last year, this same region experienced average temperature anomalies of -2 F to +2 F from average.

When examining the associated snowfall anomalies that occur during La Nina events across the continental United States, there is positive anomaly for the central and northern Plains during weak La Nina events. As the events reach the moderate and strong stage, this snowfall anomaly shift toward the northern Plains and south central Canada. Even though the northern Plains typically sees colder and stormier winters about 70% of the time during La Nina events, it is not guaranteed. Strong atmospheric ridging across the western 1/3 of the United States pushed surface systems either northeastward over the top of the ridge or southeastward into the southern Great Basin where they were directed eastward by the southern jet stream last winter.

This fall has produced an increase in storm activity across the Pacific Northwest, along with an atmospheric river event across the northern half of California during the last 1/3 of October. In addition, atmospheric river events have developed across southeastern Alaska, as well as northwestern Washington and southwest British Columbia. Each of these events have occurred since the beginning of October.

What is unusual about this fall’s atmospheric river event was how early it developed. You have to go back to 2018 to see such a strong event develop during the late fall. So much snow fell in the California Sierras during the 2018-19 winter that spring runoff led to the Oroville dam failure. It also led to heavy snowfall accumulations across the northern 2/3 of Nebraska and subsequent flooding due to the development of a bomb cyclone in early March 2019.

Current global sea surface temperature anomalies can be viewed in Figure 3. Strong cold anomalies exist in the Gulf of Alaska (blue shading), with a much weaker signal across the Equatorial Pacific. Above normal sea surface temperature cover the Atlantic north of the Equator and in the Pacific Ocean just north of the Equator off of the western Mexico coastline. Upwelling currents (Figure 4) indicate that a pocket of cold water is coming to the surface in the eastern Equatorial Pacific.

Behind this sub-surface cold pool lies an anomalous warm pool that extends westward under the Equatorial Pacific to Australia. It is this pocket of anomalous warmth that is being picked up by global model and is projected to begin weakening the current La Nina event. The global consensus of these models is to bring La Nina conditions to an end by late winter, with the distinct possibility of El Nino like or El Nino conditions developing during the second half of 2022 (Figure 6).

If our fall weather is an indication of what may come this winter, then variability will be the key player. In simple laymen’s terms, I would not be shocked if Nebraska experiences periods of very active weather whenever these atmospheric river events develop across the western United States. If these events are directed toward the Pacific Northwest, system will likely move eastward and impact the northern Plains. The central Plains region will be most vulnerable to enhanced storm activity (like late October) when atmospheric river events target the northern half of California.

When northern California receives 3 or more atmospheric river events in a winter, above average snowfall occurs. Downstream (east of this region) impacts include quick moving systems until the primary upper air low moves inland, which usually translates into a strong storm moving eastward. Of course the precipitation type depends on air temperature, so if cold air support is missing, rain and/or wet snow usually develops. If there is enough cold air to the north of the system, more significant snowfall and/or occasional blizzard conditions can develop.

Arctic Sea ice formation is also slightly different than last year and there appears to be more favorable ice formation in the western basis compared to the eastern basin. Thus with greater ice formation supporting colder surface temperatures, cold air availability for storm entering the Pacific Northwest will also be greater this winter than last winter. This would enhance, but not guarantee that stronger snowfall accumulations across the northern Rockies and High Plains.

From my perspective, sometimes you have to go with a gut feeling when forecasting winter weather. Patterns across the Plains region this fall are counter to last year’s trend, more so across the northern half of the High Plains (including Nebraska). With recent systems beginning to tap cold air to our north, I believe that we will experience more cold air infiltration during the first half of this winter than we experienced last year. The extent and longevity of these cold air events will depend on snow cover. If snow cover is persistent, then below normal temperatures would be favored. A lack of snow events during December will likely result in an above normal winter, barring a February 2020 Arctic intrusion.

If global models are correct that La Nina conditions will weaken and dissipate during the late winter to early spring period, then the southern jet stream will likely become more active and may support a stormier spring pattern across the southern Plains northward through the southern half of Nebraska. There would be less energy would be available for the northern jet stream which would impact the northern High Plains with a gradual drying pattern. If a full blown El Nino event were to develop, statistics indicates that the second half of the summer would move toward a drier pattern.

Bottom line: It appears that this winter will be more active than last year across the northern Plains and precipitation events will depend on the frequency of storm activity moving into the northern half of the west coast of the United States. As these systems move east, the intensity of cold air that filters in behind the systems as they move across the United States will determine where the storm track develops. If cold air enters the U.S. east of the Rockies, then Nebraska will lie on the western periphery of an aggressive storm pattern. If cold air is drawn southward from systems entering the Pacific Northwest, expect strong storm formation across the central and northern Plains.