Winter brought terrible cold and too much moisture to many parts of the state, leading to simultaneous catastrophic weather events in the west, northcentral and northeast parts of the state. In addition to towns and farmland crushed by flooding, cattle losses due to extreme cold, snow and flooding are estimated at $400 million in losses, according to national media reports. In addition to providing context for the events leading up to those events, we provided localized climate data to the Nebraska Farm Service Agency in York to assist in their response to emergency aid requests. You can read about our role in that process in this quarter’s edition of Climate Crossroads.

Also in this edition, we look to the future. Al Dutcher provides his quarterly forecast, and (not to spoil it) he foresees more rain in our future. We also look to this summer, when we expect to release our updated website, including an interactive page that will bring climate trend data to our users. Included in the suite will be maps, graphs, charts and NebGuide-style reports conveying our climate history and our projected climate future.

We’re proud to report the successful conclusion of a two-year research project with the High Plains Regional Climate Center, as well this quarter. The Climate for Cities website went live, bringing a “sister city” tool and more to city planners across the Central Great Plains region. Our director Martha Shulski co-led the project with Natalie Umphlett of the HPRCC.

And finally, we took a look back at the Nebraska Climate Summit, which we hosted March 21. We livestreamed the entire event and have made those videos available online. 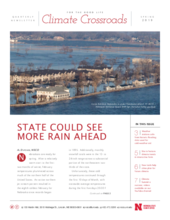