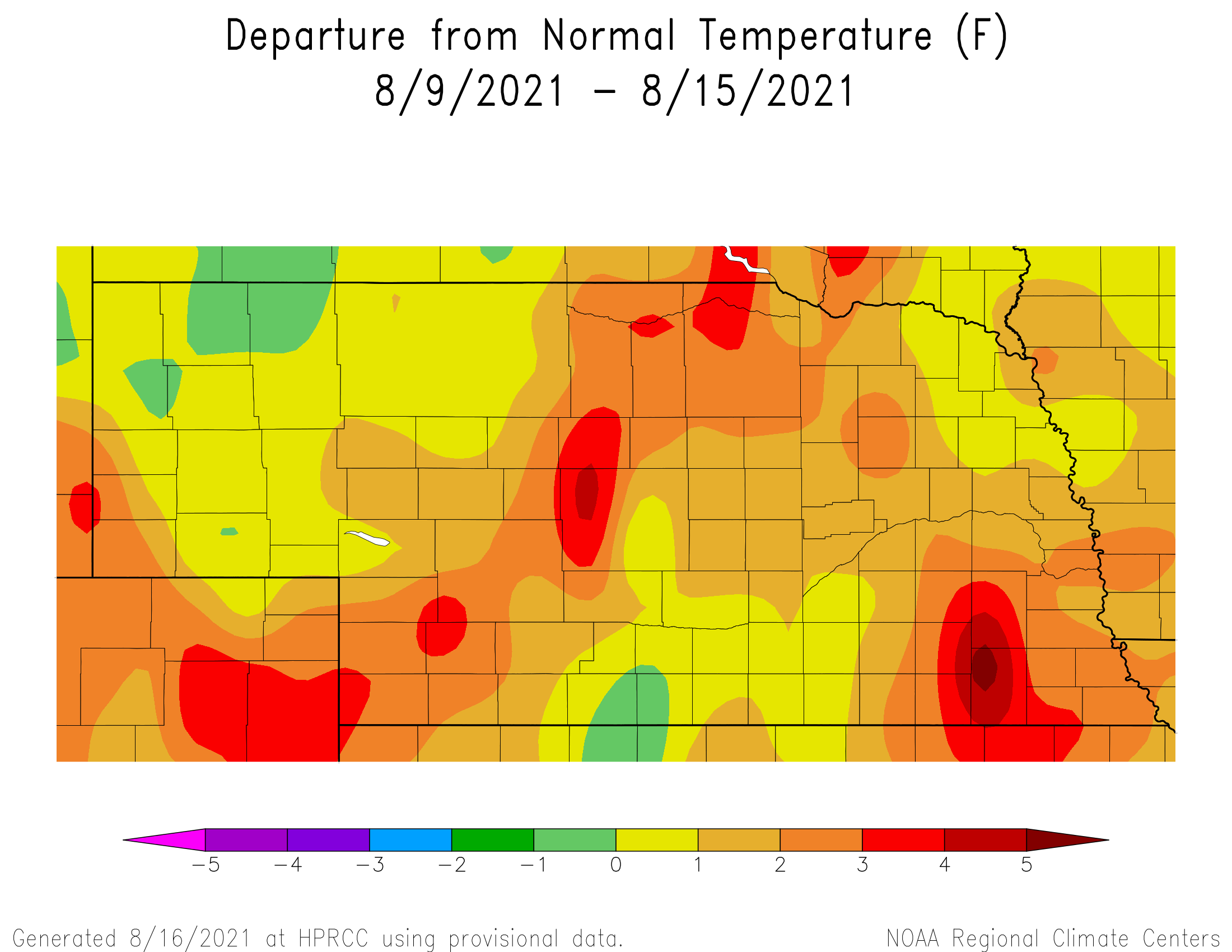 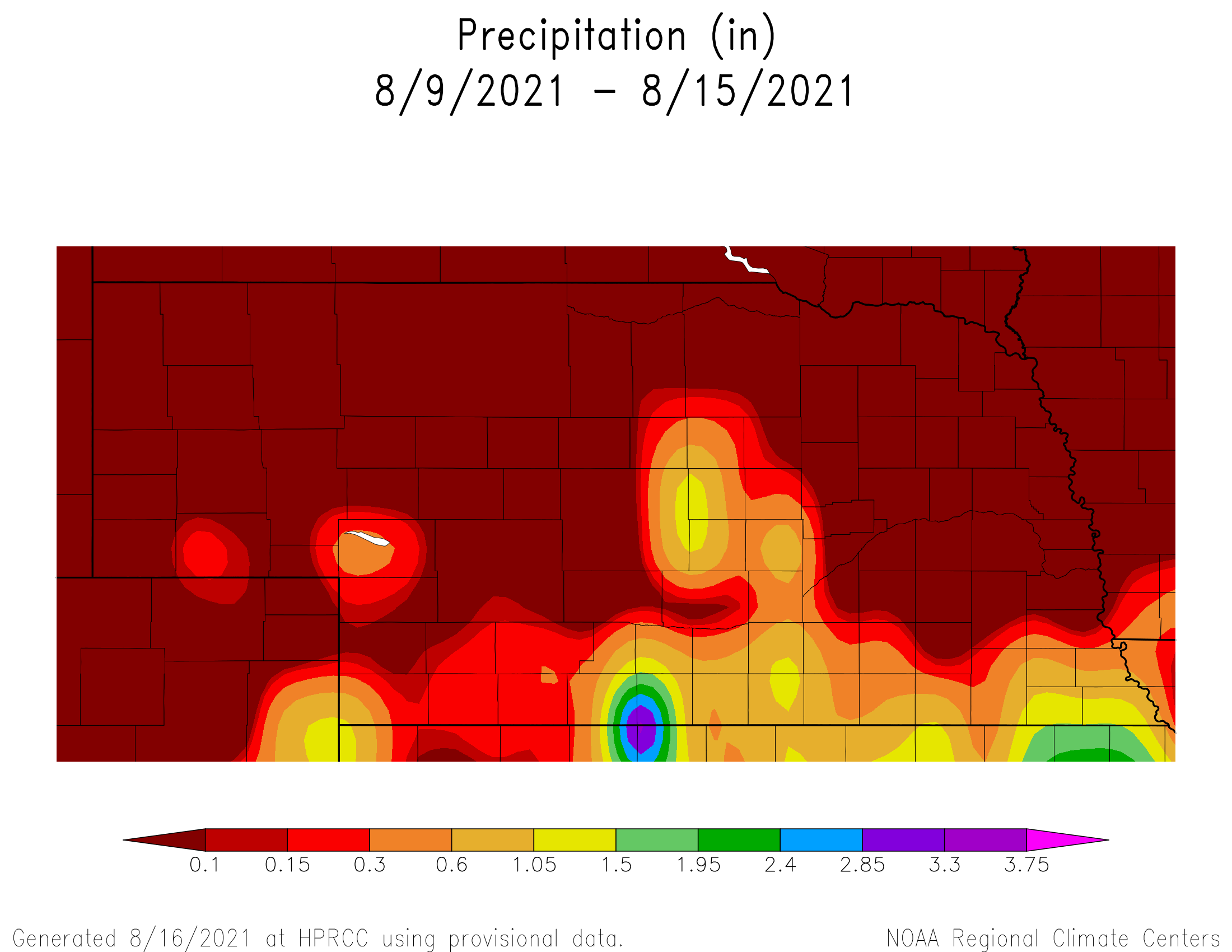 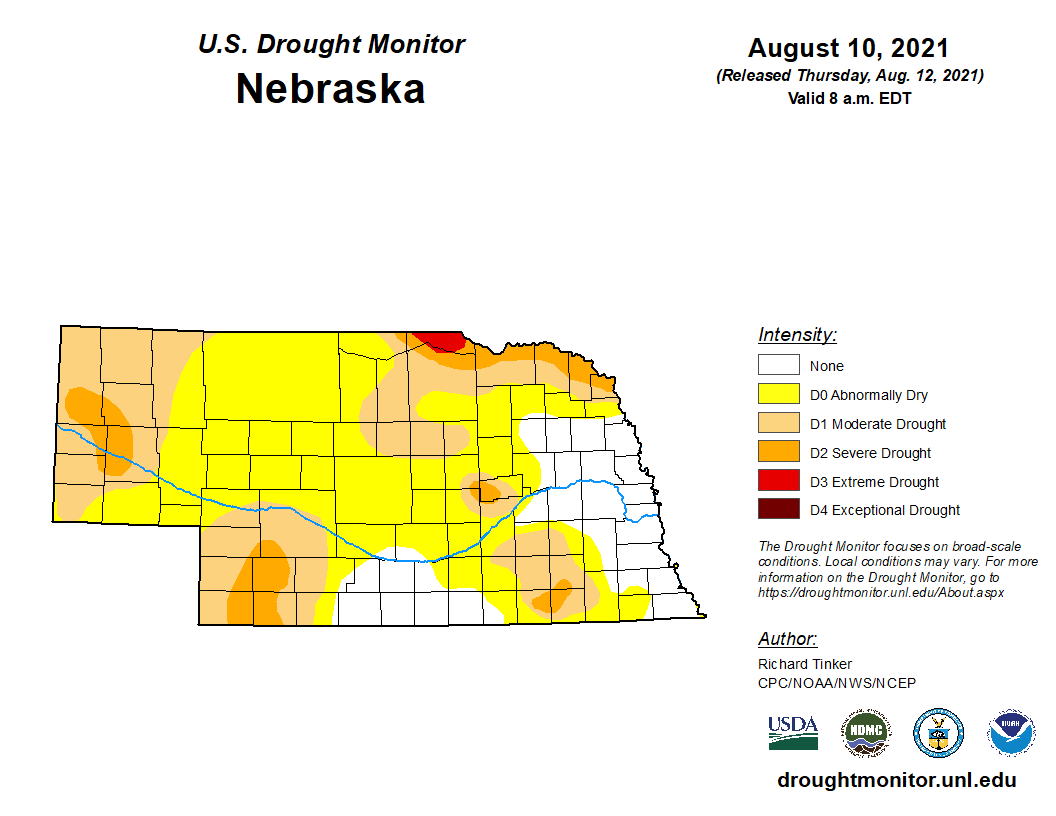 Hot temperatures took a short break this past week, giving the western 1/3 of the state a temporary reprieve from maximum temperatures reaching the upper 90’s to low 100’s. The heat was pushed east-southeast of the Panhandle August 12-13 with southern and eastern Nebraska experiencing high temperatures in the low to middle 90’s August 11-13. A cold front associated with an upper air trough crossing the northern Plains deepened and left eastern Nebraska in a northwest flow aloft. High temperatures cooled into the 80’s, but rebounded back into the middle 90’s to low 100’s across the western 1/3 of the state.

Maximum temperatures from first order weather stations (NWS and ASOS locations) during August 9-15 are as follows (date, location, maximum temperature): 8/9 (Imperial – 103), 8/10 (Scottsbluff – 98), 8/11 (Chadron – 98), 8/12 (Beatrice, Hebron, McCook – 93), 8/13(Valentine – 91), 8/14 (Chadron – 96), 8/15 (Valentine – 99). The cumulative impacts of this heat can be found in Figure 1 which looks at average temperature departures for August 9-15. Above normal temperatures of 2-5 F were observed across the western ½ of the southwest district northeastward through the western 2/3 of the Sandhill region, along with a pocket centered on the Fairbury/Beatrice/Lincoln area. Below normal temperatures were relegated to the northern Panhandle, although some of this cooling may be an artifact of mapping boundary impacts overestimating cooling.

The most widespread precipitation event occurred from the afternoon of August 12 into the morning hours of August 13. Precipitation fell primarily south of I-80 except for a small area just to the north of Grand Island. The greatest 24-hour totals were observed south of a line from McCook to Hastings to Auburn where pockets of 1.00 to 2.00 inches were reported. Even with these rainfall pockets, about half of the observational area failed to receive more than 0.20 inches of moisture. Those locations that were lucky enough to receive at least an inch of moisture likely experienced some crop improvement or a temporary halt to crop health declines.

Subsoil ratings as of August 15 stood at 16% very short, 48% short, 36% adequate and 0% surplus. The very short category increased 3 and the short category increased 4 percentage points. The increases in the two lowest moisture categories came at the expense of the adequate rating which dropped 7 percentage points from the previous week. More significant declines were averted due to the pockets of 1-3 inches of moisture received during the last week south of the I-80 corridor.

The condition of the soybean crop as of August 15th according to NASS stood at 2% very poor, 6% poor, 20% fair, 53% good, and 19% excellent. Soybeans in good to excellent condition stood at 72%, which is a decline of 4 percentage points from the previous week. Soybeans setting pods reached 89% according to NASS which compares to 89% last year and the 5-year average of 82 percent. The first soybean fields are beginning to drop leaves and NASS reports 2% of the crop reached this stage as of Sunday. This is equal to last year’s pace and ahead of the 5-year average of one percent.

Sorghum ratings showed small improvements in conditions according to NASS and is result of the precipitation that fell south of the I-80 corridor last week, which is where the overwhelming majority of the crop is grown. According to NASS the condition of the sorghum crop as of August 15 stood at 3% very poor, 10% poor, 28% fair, 46% good and 13% excellent. The good to excellent category remained unchanged from the previous week, but improvements were noted in the lower quality categories. The very poor category remained unchanged from the previous week and the poor category dropped 3 percentage points. The fair category absorbed the decrease in the poor category by expanding 3 percentage points from the previous week. NASS also reports that 18% of the crop was turning color, which compares to 13% last year and the 5-year average of 20 percent.

The GFS model once again is advertising several precipitation events over the next two weeks, with the most robust coverage depicted to occur August 19-20 as strong upper air trough moves across the northern and central Plains. If this event fails to materialize or underperforms current modeled precipitation, crop condition declines and significant drought expansion are likely due to the fact that above normal temperatures and below normal moisture are currently favored in the morning run of the GFS model issued August 17. In fact, the GFS indicates that the best precipitation opportunities after this week’s system will occur August 24-25 (east), August 26 (west), August 28 (entire state), August 30 (entire state) and September 2 (west).

The upper air pattern August 17 – September 2 favors the movement of an upper air trough from the Pacific Northwest across the northern Plains (8/17-8/21), then transitioning to weak upper air ridging across the southern and central Plains August 22-23. The GFS model then hints at a couple of weak waves moving across the northern third of the United States, potentially leading to precipitation across Nebraska August 23-25. The upper air ridge is forecast to build from the southwest into the central Plains August 28 – September 2, which places northern and eastern Nebraska on its northern periphery, potentially leading to scattered showers and thunderstorms August 28th and 30th initiating across the Panhandle and moving eastward during the overnight hours.

Maximum temperatures during the next two weeks are forecast to be above normal, but not nearly as hot as the past two weeks where daily regularly exceeded 95 F over the western 1/3 of Nebraska. There is a high probability that maximum temperatures will reach the lower 90’s, but the GFS model doesn’t build the upper air ridge far enough northward to allow widespread 100 plus readings from developing north of Kansas. Even if temperatures reach the middle 90’s or higher, the reduction in daylight hours from the first day of summer will limit 90 plus temperatures to the afternoon hours.

On August 19th, the Climate Prediction Center (CPC) will issue their preliminary outlooks for September and September – November. This outlook will be the second issuance after the La Niña watch issued July 8th. CPC’s latest ENSO release on August 12 places the probability of a weak La Niña event developing during the September-November period at 70%, an increase of 5 percentage points from the July forecast. With much of western and northern Nebraska (along with the northern Plains) being in some form of drought since last summer when moderate La Niña conditions were developing, CPC’s precipitation outlook will offer a glimpse of fall soil moisture recharge period, which was well below normal across the central and northern Plains last fall.