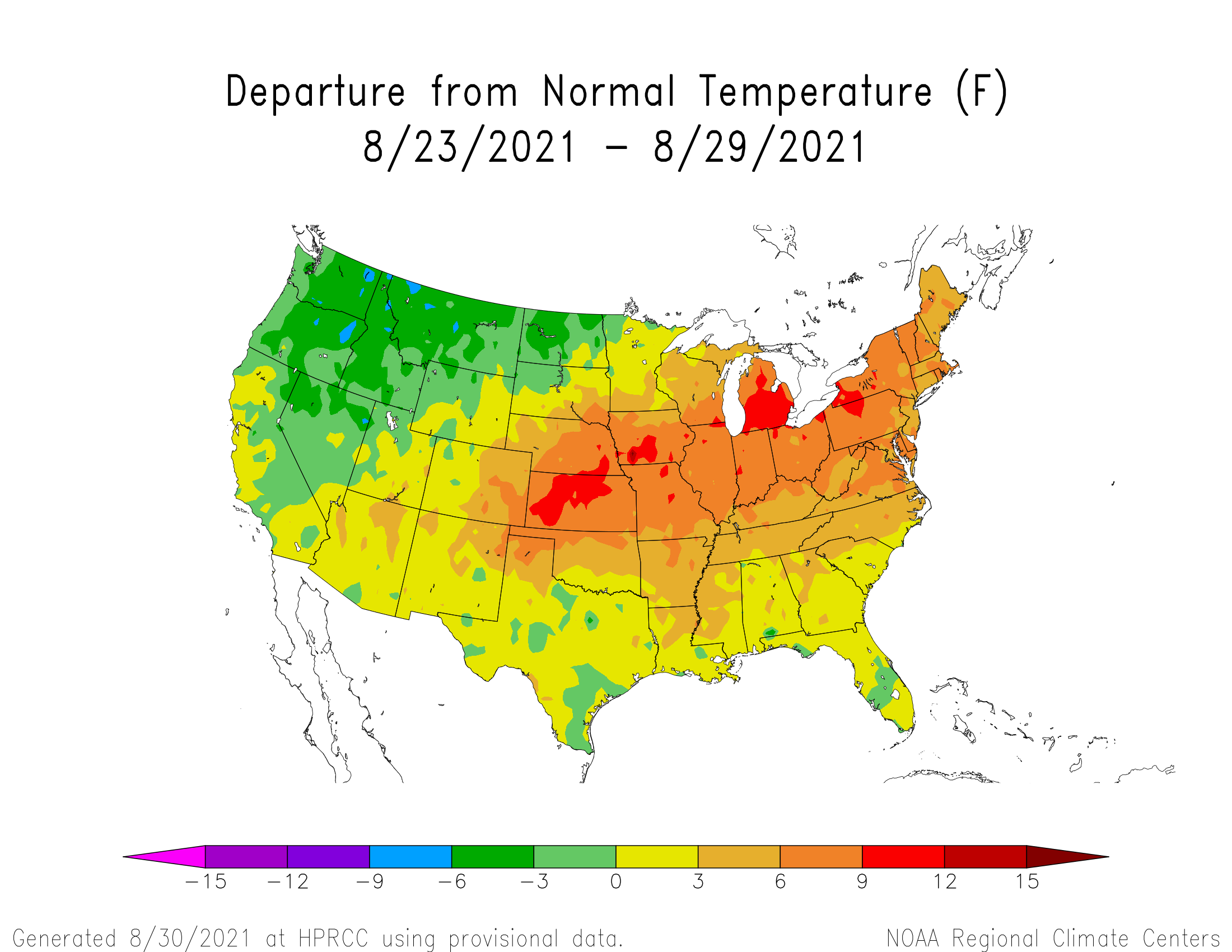 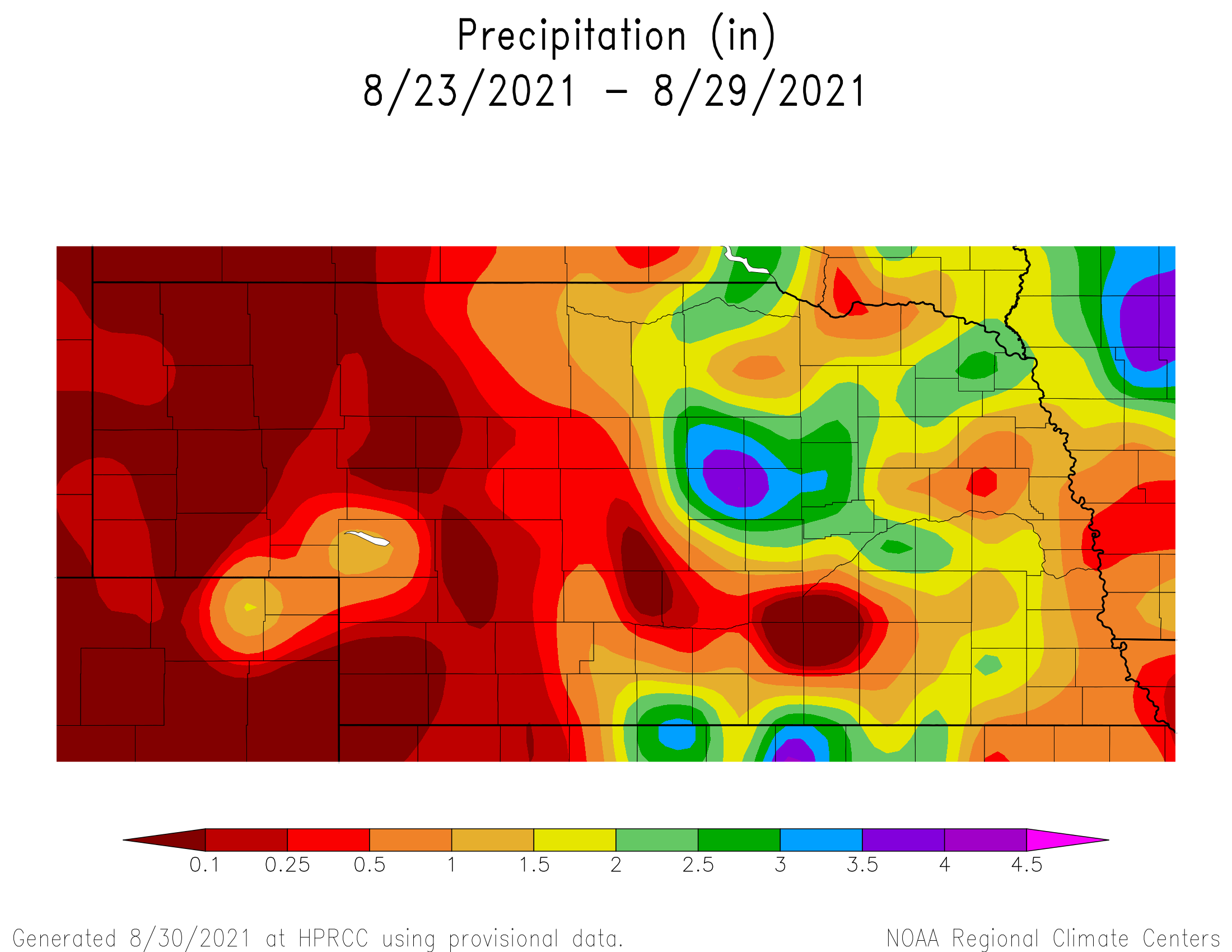 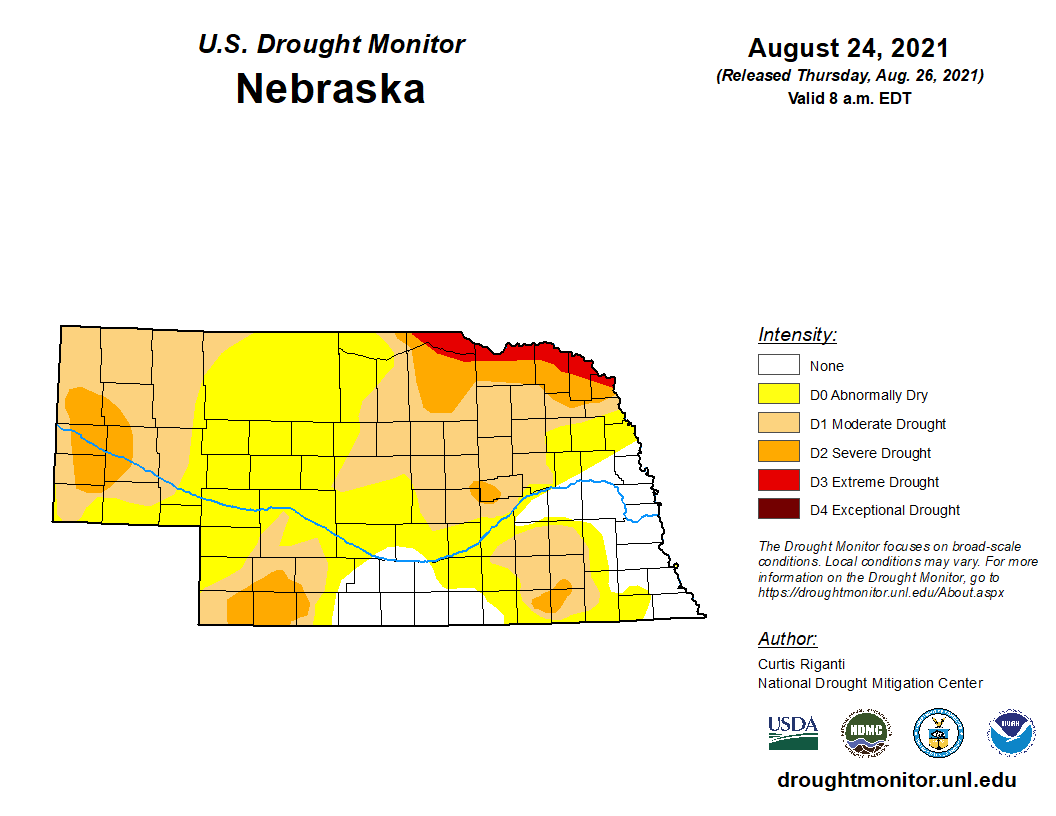 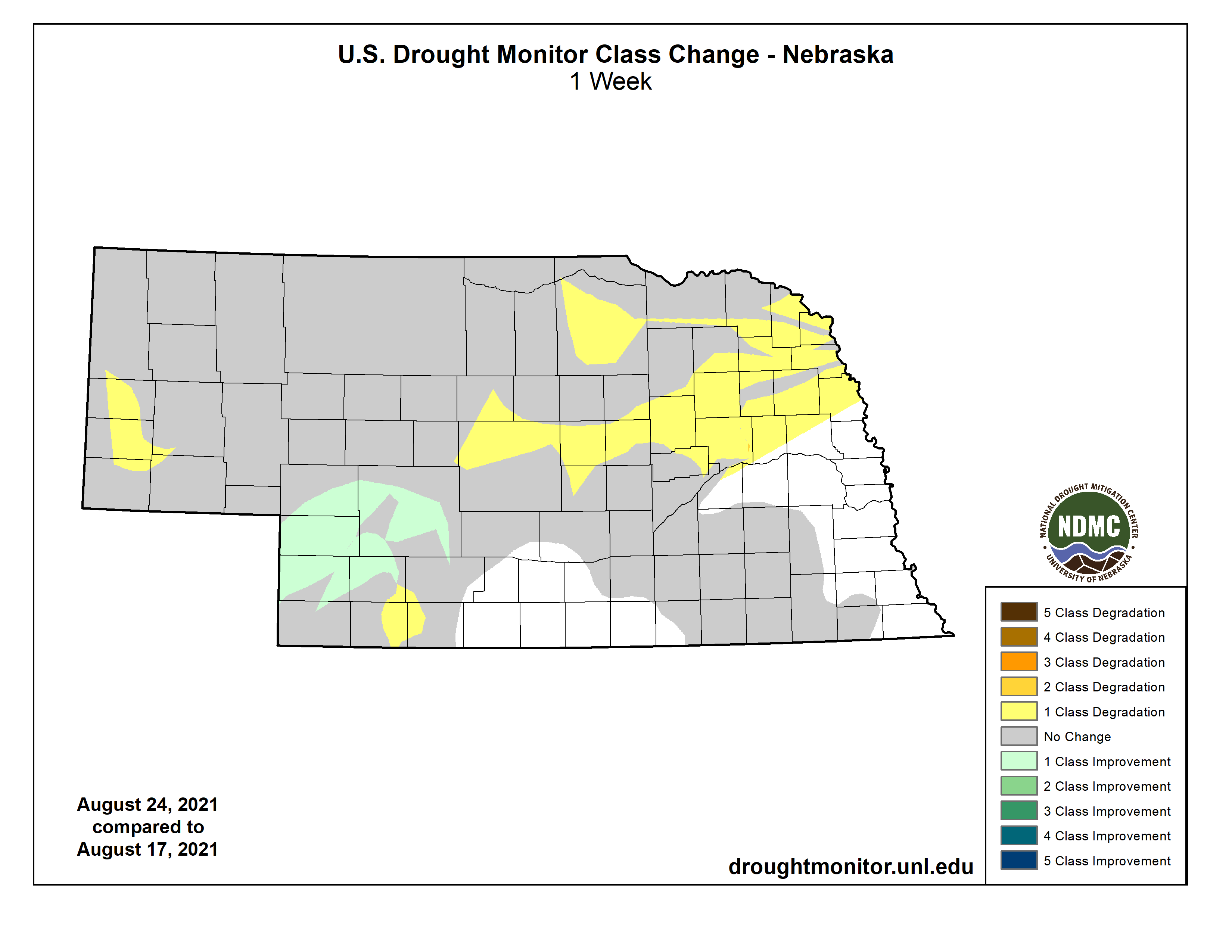 Although a strong upper air trough crossed the northern Plains during this past week, the cold air advertised by the models to last 2-3 days failed to materialize. The base of the trough bottomed out along the southern Nebraska border and quickly lifted northeast in response to an upper air ridge building from southwestern U.S. into the southern High Plains. The state daily high temperature exceeded 90 F in at least one location August 23-28. High temperatures reached or exceeded 100 F on the 24th, 26th and 27th.

Just like the previous week, there were some concentrated areas of heavy precipitation across the state, with at least one location reporting over an inch of rainfall every day from the 23rd through 29th. The most concentrated precipitation coverage occurred from the afternoon of the 28th through the morning of the 29th as a complex of thunderstorms moved southeast across eastern Nebraska. A broad area of precipitation in excess of one inch fell east of Stockville and south of Burwell. A 50 mile wide stretch of 2-3 inches of precipitation fell from Burwell through Stromsburg, as well as an south of a Hebron to Wilbur to Beatrice line.

For most areas of the state, weekly precipitation was under two inches and it is not surprising that subsoil moisture rating changes were subdued since average soil water holding capacity for the eastern half of the state are between 1.50 and 2.00 inches. A high percentage of this area had failed to record more than an inch of moisture during the first half of August so available moisture in the top foot of the soil profile had been used up by maturing crops.

At this point in the growing season, grain crop statistics are primarily focused on condition and maturity rankings since harvest activity will not likely be widespread until the second half of September. Statewide corn and soybean ranking were unchanged from the previous week according to NASS, while sorghum experienced a significant weekly crop condition decline. Corn in good to excellent condition stood at 67% as of August 29 and soybeans were at 69 percent. Sorghum was rated 48% good to excellent, a decline of 8 percentage points, largely as a result of the hot and dry conditions that dominated the western 1/3 of Nebraska August 23-29.

The latest GFS model run released the morning of August 31 indicates that the widespread heat that dominated August may be finally starting to break down. The jet stream pattern indicates that an upper air trough will cross the northern Plains September 1-4 and drive a surface cold front through Nebraska September 3-4. The GFS indicates that precipitation is forecast to develop September 1 across the western 1/3 of the state and move into the eastern half of the state September 2 as a surface warm front pushes east. The cold front is forecast to follow on September 3 and the potential exists for heavy precipitation (1-2 inches) across eastern Nebraska. High temperatures will range from the mid 80’s to low 90’s through September 2nd, before cooling into the 80s for the Labor Day weekend.

As the upper air trough moves into the western Great Lakes, the GFS model indicates a zonal to weak northwest flow aloft will develop over Nebraska September 5-6. The Hudson Bay upper air trough is forecast to deepen over the Great Lakes September 7-9 and expand westward into the central and northern Plains. Although the GFS doesn’t depict any precipitation, it does bring cooler Canadian air to the eastern half of the state. If the GFS model is correct, high temperatures will warm into the middle 80’s (northeast) to middle 90’s (west) September 6-7, before dropping back into the 70’s (northeast) to middle 80’s (southwest) September 8-9.

A weak short wave trough is depicted by the GFS model to move east-southeast on the backside of the Hudson Bay upper air trough September 10-11. Currently the GFS model depicts light precipitation will occur across the eastern half of the state due to the lack of Gulf of Mexico moisture being advected northward to interact with the surface front. As this shortwave moves eastward, it will aid in deepening the Hudson Bay upper air trough which allows cool Canadian air to flow southward into the northern half of the High Plains (including Nebraska) September 12-13. The GFS once again depicts a light precipitation event for the eastern half of the state.

Between September 14th and 16th (end of the GFS model period), the GFS model weakens the Hudson Bay upper air trough and strengthen the western U.S. upper air ridge. Thus a warmer and drier pattern is currently suggested for Nebraska with high temperatures returning to the 80’s, with the western 1/3 of the state poised to warm into the low to middle 90’s. No precipitation is forecast, but the GFS model does indicate that another upper air trough will begin to form and move eastward the third full week of September.