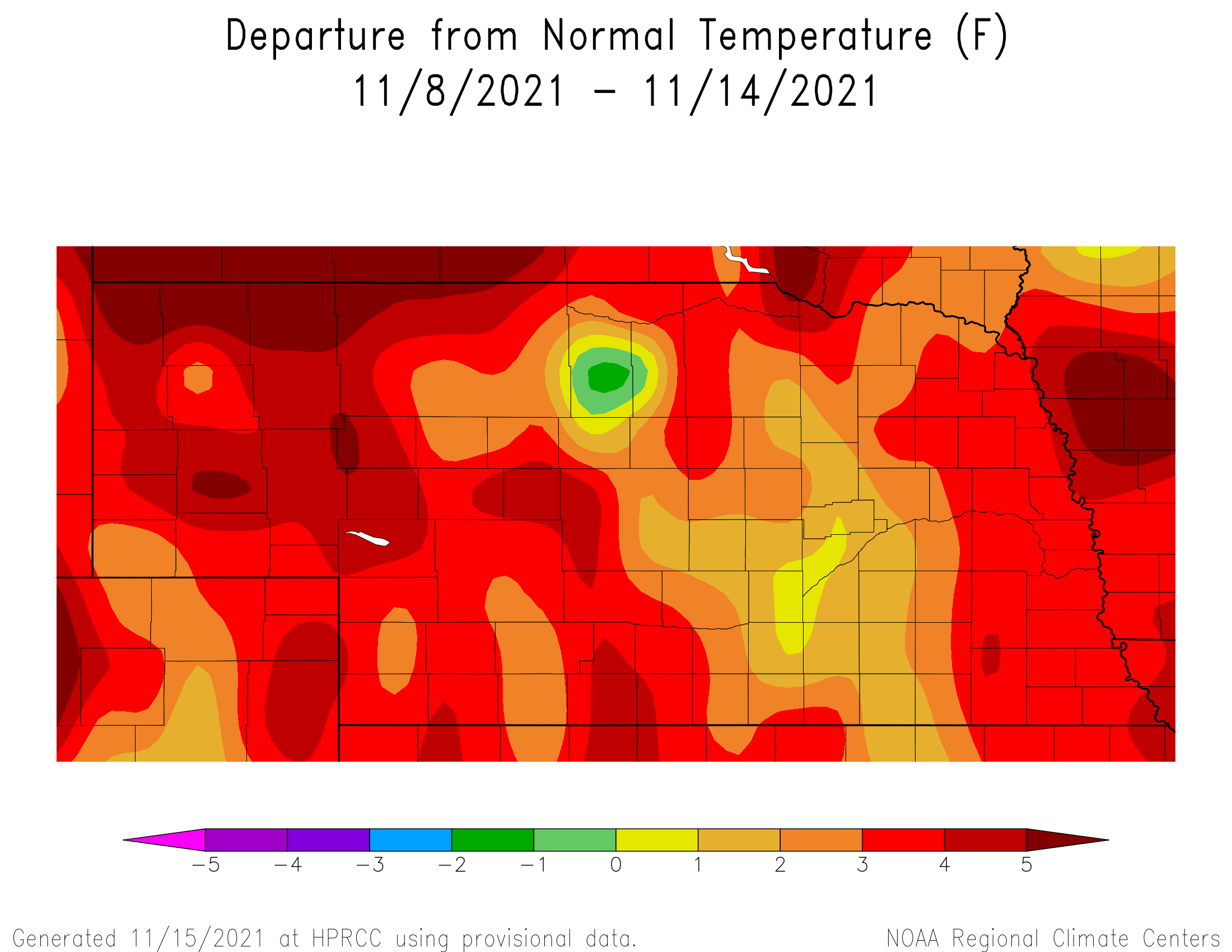 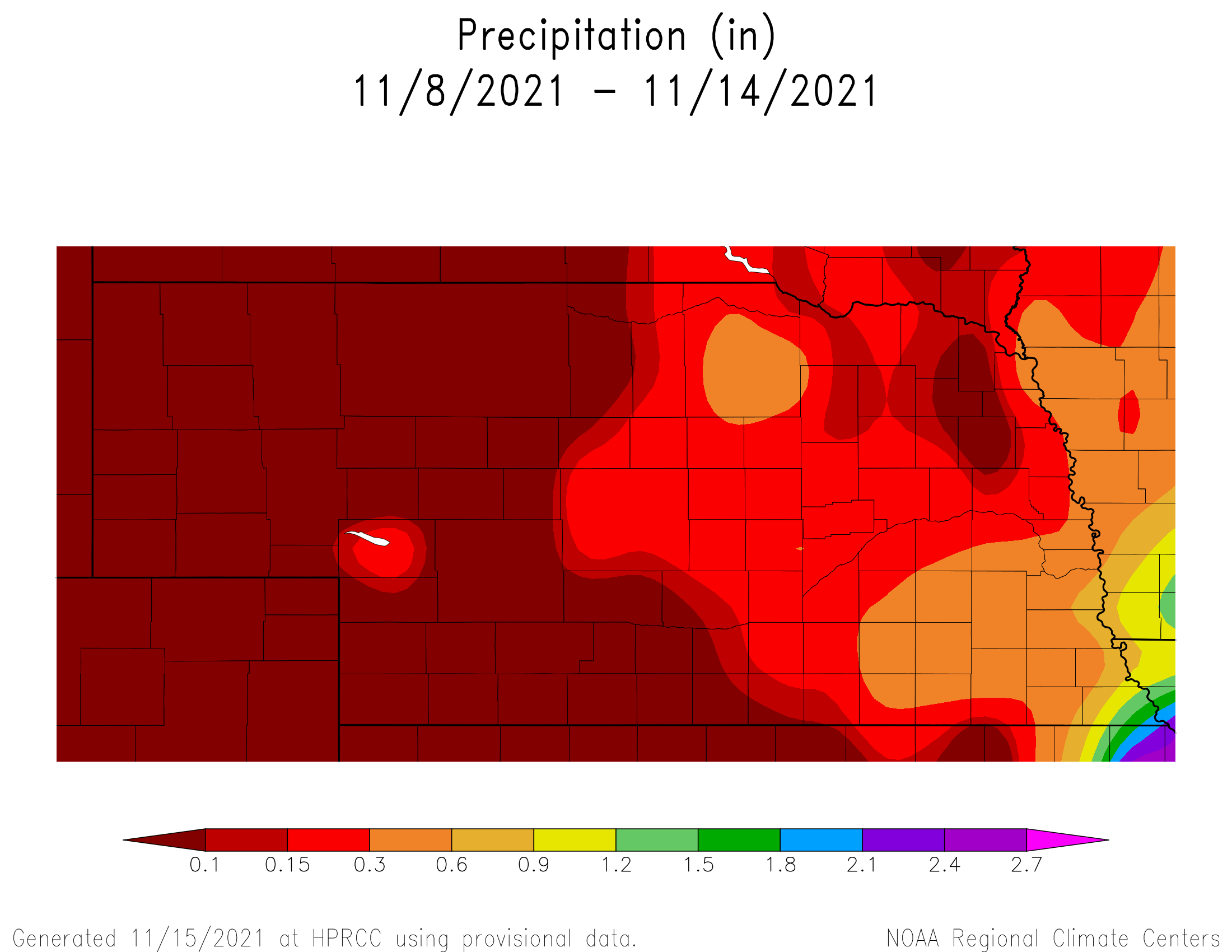 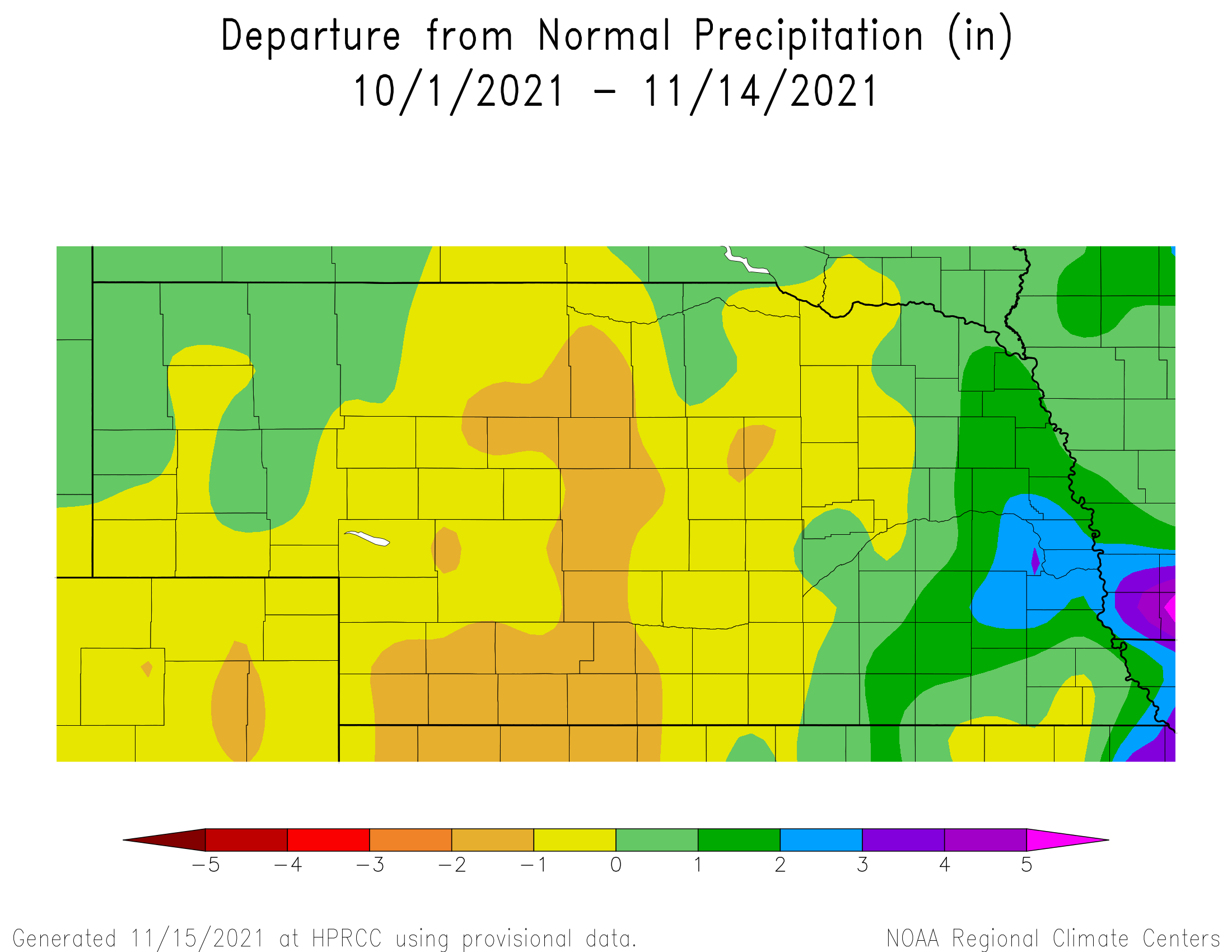 This past week brought above normal temperatures to the beginning and end of the period, with active weather during the mid-week period. An atmospheric ridge located over the central United States pushed eastward in response to a powerful upper air trough that crossed the northern Plains November 11-12. High temperatures October 8-10 were primarily in the 60’s, with 50’s across the Panhandle on November 10 as a surface cold front pushed through the region.

Behind the front, high temperatures statewide dropped into the 40’s to low 50’s November 11-12 before warmer air from the western United States built into the region November 13-14 as the upper air trough slide into the eastern Great Lakes and was replaced by a building atmospheric ridge pushing eastward from the Great Basin region. Even with the colder mid-week temperatures, average temperatures state wide were 1-4 F above normal (Figure1). It should be noted that areas south of I-80 (south central and southeast) finally received their first hard freeze of the season the morning of November 13th.

Although measurable moisture was reported somewhere in the state on 6 of the 7 days within the November 8-14 period, the most concentrated and widespread moisture event occurred November 10-11 as the northern Plains low pressure system drove a cold front through eastern Nebraska producing rain and isolated thunderstorms along and south of the I-80 corridor from York to Omaha. Most NERain observers reported 0.25-0.50 inches west of Lincoln, increasing to 0.50-1.00 inches from Lincoln southeast through Auburn. Precipitation totals of 1.00-1.75 inches were reported throughout Richardson county.

A second piece of energy rotating around the northern Plains low pushed through the state November 12 and brought light precipitation to eastern Nebraska (<0.10 inches). Temperatures were cold enough to produce flurries and light snowfall across northeastern Nebraska. Preliminary reports indicate snowfall totals were under an inch at most location north of a line from just west of Norfolk eastward to the Iowa border. One inch of snowfall accumulation was reported 0.7 miles northeast of Wayne.

Very strong winds developed November 11-12 as Arctic air surged southward behind the surface cold front. Wind gusts in excess of 60 mph were reported across the northern half of the state, with 30-60 mph gusts across southern Nebraska. With harvest activity nearing completion, lodging and dropped ear reports were minimal. Further to our north, these powerful winds combined with 3-8 inches of snowfall created blizzard conditions across eastern North Dakota, western Minnesota, southeastern Alberta and southern Manitoba.

Cumulative precipitation totals for the November 8-14 period can be seen in Figure 2, while the soil moisture recharge period anomalies (October 1 to present) appear in Figure 3. Extreme eastern Nebraska continues to carry surplus values for the recharge period due to widespread moderate to heavy precipitation events the final 10 days of October. Unfortunately, most of the central 1/3 of the state missed these beneficial moisture events and precipitation anomalies now exceed one inch.

Harvest activity across the state is approaching the finish line according to the Nebraska Agricultural Statistics Service (NASS) crop report issued November 15th for conditions through November 14th. Last week the soybean harvest was estimated to be 95% complete, while no statistics were highlighted this week. This would indicate that NASS estimates that the soybean harvest has reached the 99% level or higher.

The corn harvest statewide was estimated to be 90% complete, compared to 82% last week. Last year at this time harvest activity was estimated to be 96% complete and the 5-year average is 88 percent. Based upon a dry forecast this week, the corn harvest should be at 95% or greater when NASS releases their crop report on November 22nd. The sorghum harvest is also nearing completion with 91% of the crop estimated to be harvested as of November 14th, which compares to 97% last year and the 5-year average of 89 percent.

Very dry conditions across the western ¾ of the state this past week means that topsoil and subsoil moisture conditions failed to show improvement. NASS reports that topsoil moisture supplies were rated 8% very short, 27% short, 64% adequate and 1% surplus. The most significant change from the November 8th NASS crop report was to increase the very short category 2 percentage points at the expense of the short rating.

It should be no surprise that pasture and rangeland conditions continue to reflect dry conditions from the continuation of drought conditions and below normal moisture since the beginning of the soil moisture recharge period which started at the beginning of October. As of November 14th, NASS reports that pastures and rangelands were rated 12% very poor, 18% poor, 54% fair, 14% good and 2% excellent. With the winter fast approaching, which represents an average of 6-8% of our annual precipitation totals, significant improvement of rangeland conditions will not likely occur until next spring barring the development of a significant snow/rain event prior to ground freeze up.

The outlook for the next two weeks indicates that several pieces of energy will cross the northern Plains leading up to the beginning of the Thanksgiving holiday weekend, before the GFS model develops a powerful storm system across the western ½ of the country at the end of November into the beginning of December. As of the morning of November 16, the GFS model indicates that moisture with systems crossing the northern High Plains will be limited to the Dakota’s and Minnesota, leaving Nebraska just south of the predicted precipitation pattern.

Last week the GFS model was pointing toward an aggressive storm pattern for the central Plains, but has since shifted it northward into the northern Plains. Late last week the GFS model backed away from this active pattern and called for high pressure to dominate the central Plains through Thanksgiving. During the last two days, the active pattern has returned, but forecasted moisture remains to our north. Any southward displacement of this pattern will place the northern half of the state in a position to receive light moisture. Moisture will be limited due to the unfavorable northward flow of Gulf of Mexico low level moisture into these northern Plains troughs as currently forecast by the GFS model.

At present, the GFS model indicates that short wave troughs will cross the northern Plains and deepen as they reached the western Great Lakes. Cold air that filters southward on the back side of these upper air short waves are forecast to have a greater impact on the eastern half of the state. The first short wave is forecast to move through the northern Plains November 16-17, with additional waves forecast for November 20-21 and 24-25. If the GFS is correct, each shortwave passage will drop temperatures back into the 40’s to low 50’s, only to see temperatures rebound back into the mid 50’s to mid 60’s prior to the arrival of the next short wave.

The GFS model depicts a strong upper air low will begin to make landfall along the west coast of the United States by November 27, then slowly work southeastward through November 29th. During this time frame, the GFS develops heavy precipitation from central California northward through northern Washington. By November 30th, the GFS model moves this upper air low into the central Colorado and develops heavy snowfall on the western slopes of the Rocky Mountains.

According to the GFS model, this system will begin to emerge east of the Rockies on December 1 and spread moisture across the western half of the state and the entire state on December 2. At present, there appears to be enough cold air available for this system to generate snowfall from Nebraska northward through eastern Montana and the Dakota’s. There doesn’t appear to be a large surge of Arctic air behind the system, so at present, the GFS output would suggest a wet snow event if it has handled the track and timing of the storm system correctly.