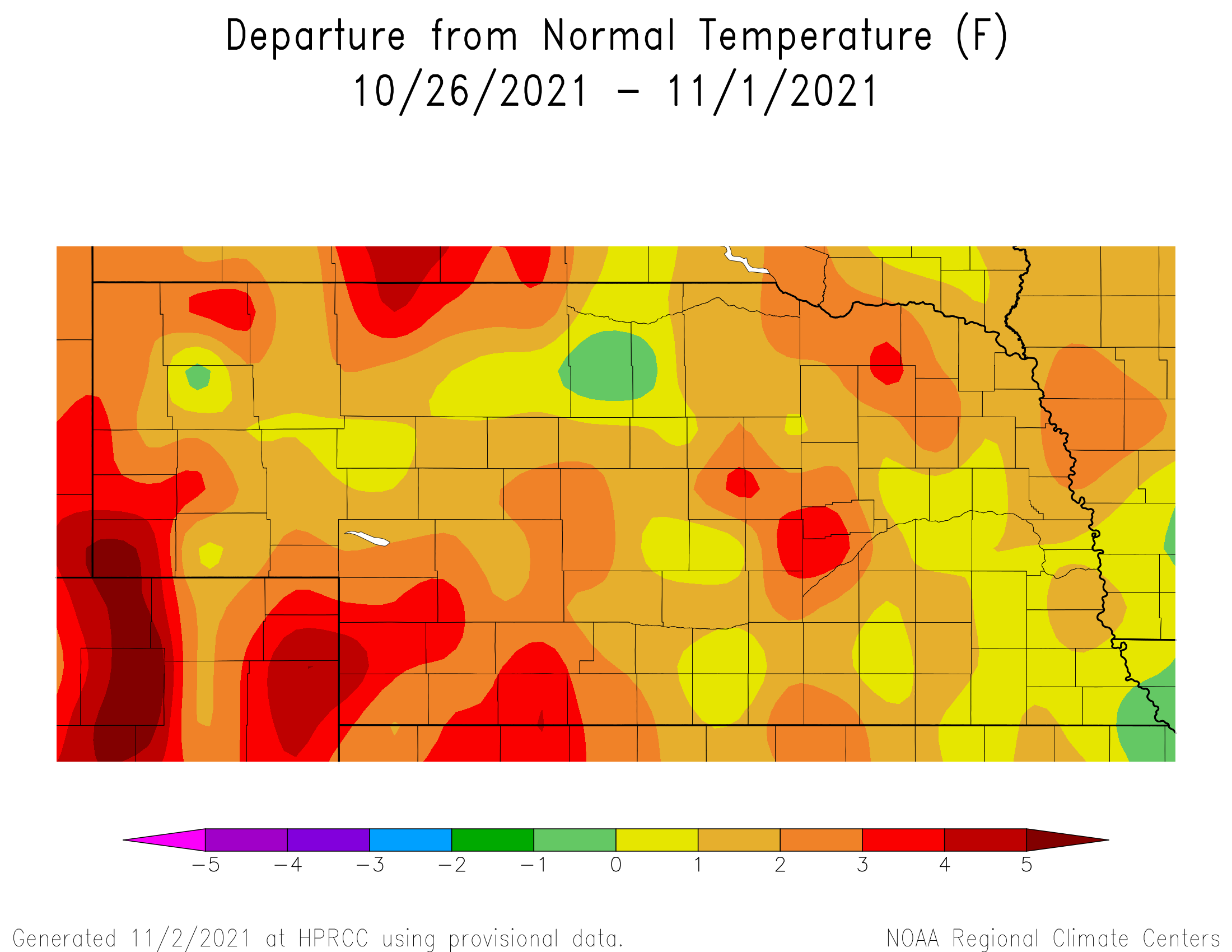 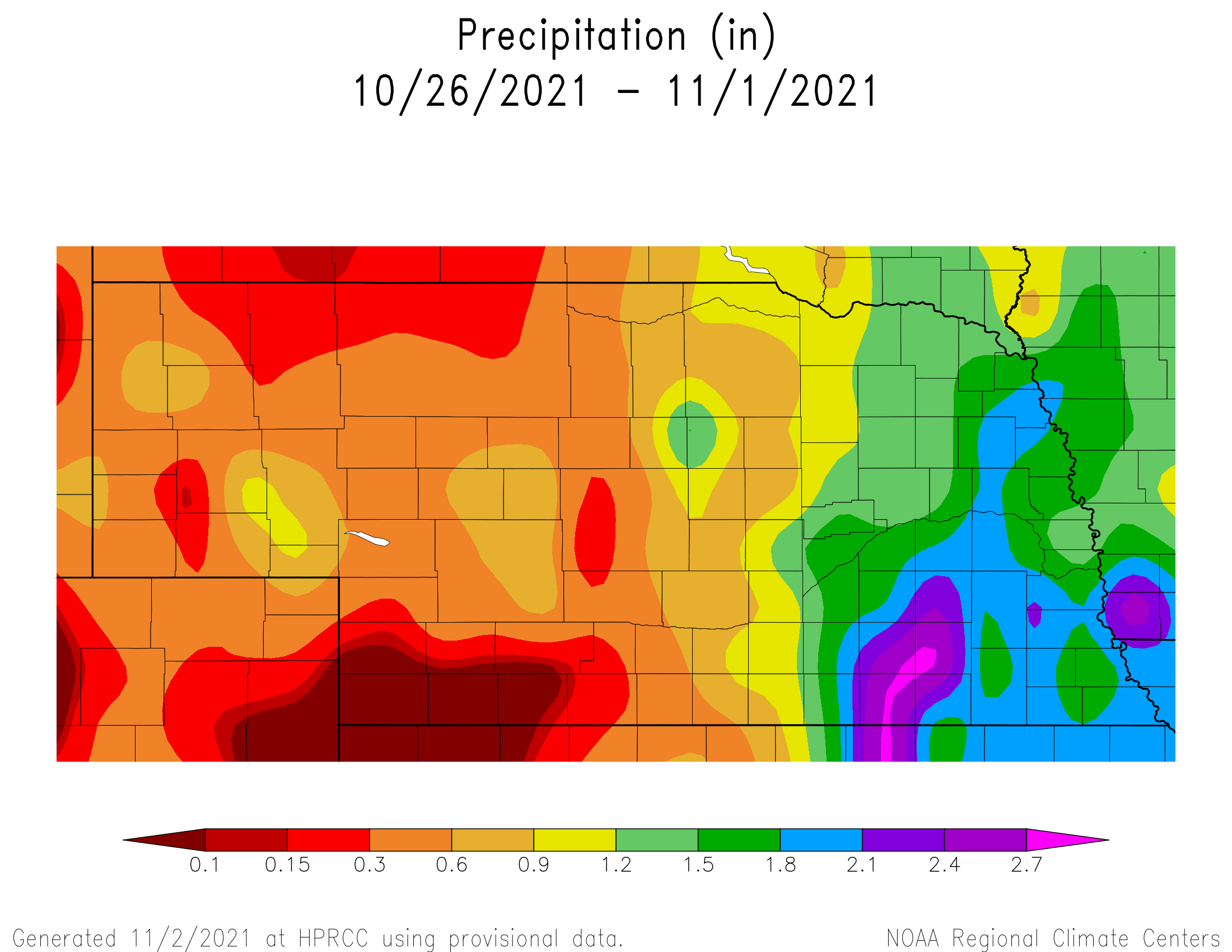 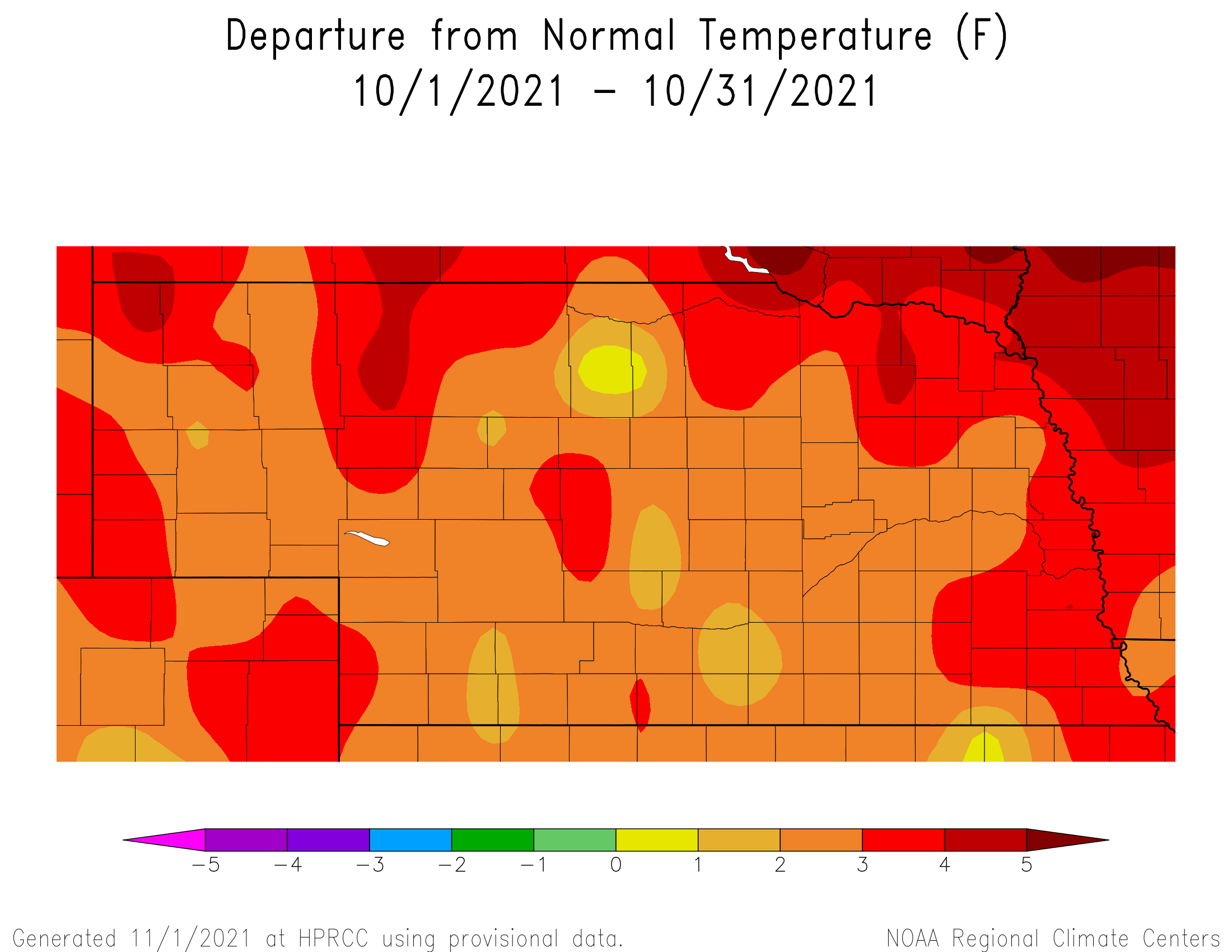 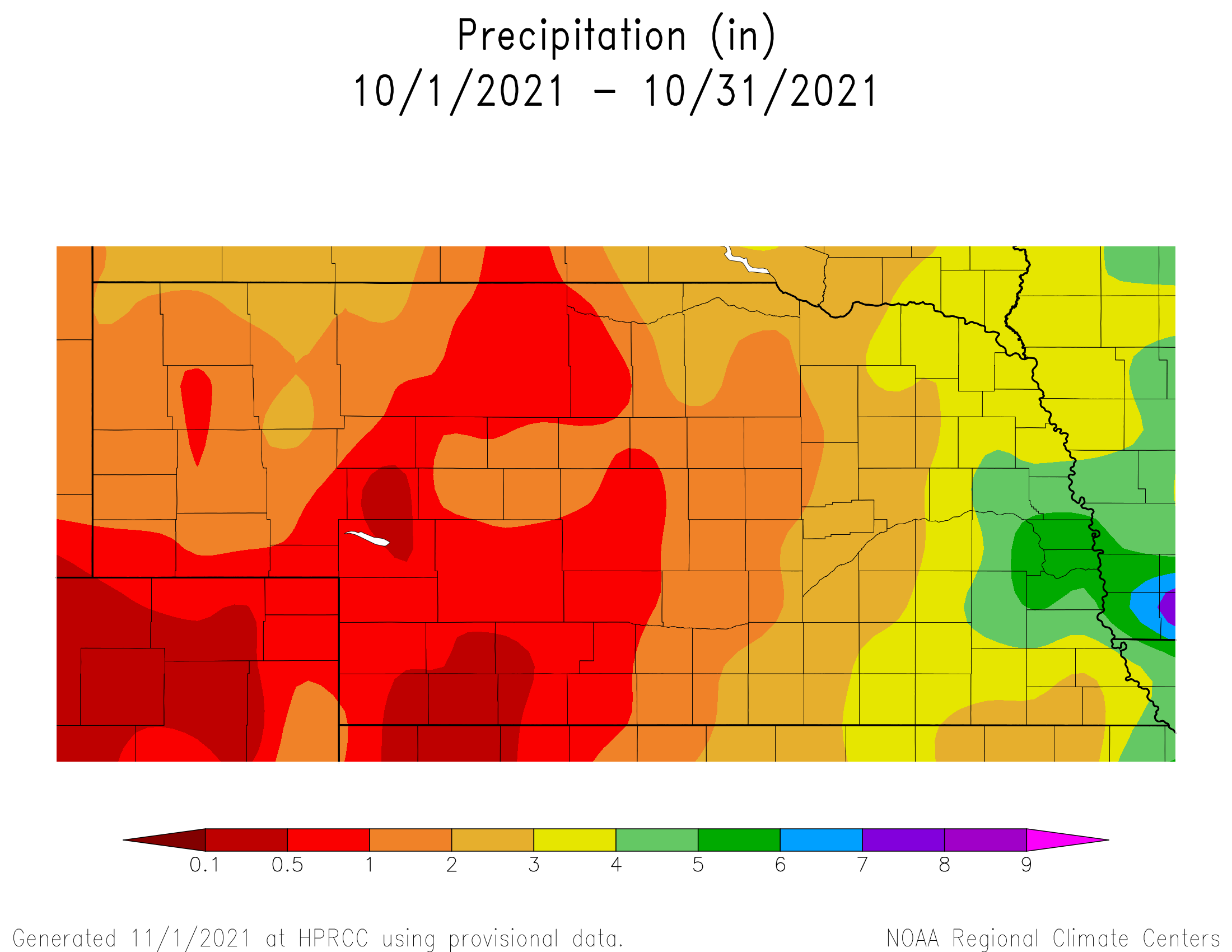 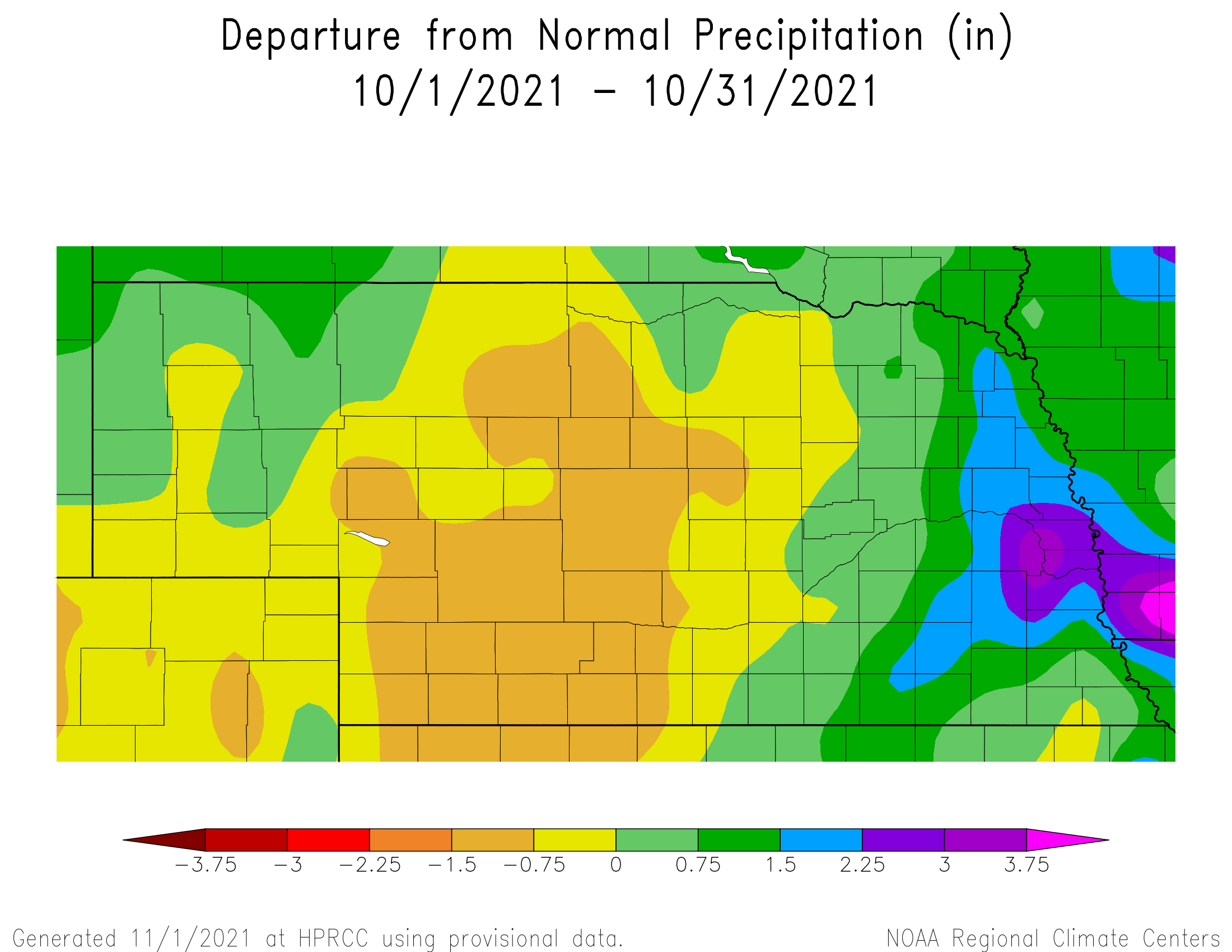 As expected, the combination of storm systems impacting the state October 24-25 and 27-28 produced widespread rainfall of 1-5 inches across the eastern 1/3 of the state limited harvest activity last week. Western Nebraska did receive moisture from these two systems, but the accumulated precipitation from these events was under an inch at most locations and weather harvest delays were limited to 1-2 days versus the entire week for eastern Nebraska.

A storm system crossing the state during the second half of October 31 and dropped 3-6 inches of snowfall across the southern Panhandle eastward through North Platte. This event will be incorporated into next week’s crop progress report released by the Nebraska Agricultural Statistics Service (NASS). Preliminary snow to water ratios were in the range of 8-10 inches of snow for every inch of water equivalency. Areas that received 3-6 inches of snow reported liquid equivalent values of 0.25-0.50 inches of precipitation.

Precipitation was widespread across the eastern half of the state with these two storm systems, with the first system producing strong thunderstorm activity and the second producing a long lived steady precipitation event. Thunderstorms across the eastern ¼ of the state October 24th led to flash flooding across southern Lancaster and northern Gage counties as radar indicated precipitation approached 5 inches. The October 27-28 system dropped 0.50 to 2.00 inches of rainfall from Grand Island eastward. Figure 2 depicts the accumulated precipitation from October 26 – November 1. Areas east of Grand Island received at least an inch of moisture, while north central and southwest Nebraska reported less than 0.30 inches of moisture.

Precipitation the final week of October precipitation brought monthly totals above 3 inches east of York, with 5-6 inches around the Omaha metropolitan area (Figure 4). Monthly precipitation totals were less than an inch across west central and southwest Nebraska, with less than 0.50 inches in areas in and around McCook and Ogallala.

Since October is traditionally the start of the soil water recharge period (October – April), precipitation activity the final week of the month resulted in surplus anomalies across eastern Nebraska and the northern half of the Panhandle, along with pockets in the northeast (Figure 5). Surplus moisture of 1.5-3.75 inches were common from Lincoln eastward, with normal precipitation to surpluses of 1.50 inches were observed across the northern half of the Panhandle. However, a broad area of precipitation deficits of 0.75-1.50 inches covered north central, central, south central, southwest and west central Nebraska.

According to NASS, the percentage of warm season crops estimated to be harvested as of October 31 stood at 72% for corn, 91% for soybeans and 78% for sorghum. Compared to the October 24 NASS crop report, 12% of the corn crop was harvested last week, while 3% of the soybeans and 6% of the sorghum were run through combines. The eastern 1/4 of the state accounts for over 80% of the soybeans produced, so it is not surprising that only 3 percent of the crop came out of the field last week with the abundance of rainfall.

With the calendar turning to November, we are now beginning to enter the drier portion of the calendar year. Precipitation from November through March represents 20 percent or less of the annual total based upon the 1991-2020 climate normals. For November proper, normal monthly precipitation totals range from 0.70 inches across the northwestern Panhandle to 1.90 inches in the extreme southeastern corner of Nebraska.

It does appear from the GFS model output from the morning of November 2 that producers will have an extended period of favorable harvest weather as an upper air ridge builds into the central United States this week. It appears that Indian summer conditions will prevail through early next week before an upper air trough begins to move eastward from the Pacific Northwest. In simple layman’s jargon, Indian summers are an extended period of above normal temperatures and dry weather following a hard freeze (minimum temperatures 28 F or lower).

The GFS model indicates that an upper air ridge will dominate the central United States through November 5 before an upper air trough crosses the northern Plains November 6. At present, the GFS models keeps precipitation with this trough to the north of Nebraska, but slightly cooler air will filter into Nebraska. High temperatures will warm from the 40’s November 2 to the 50’s by November 4, with 60’s likely November 5. Depending on the speed of the northern Plains trough, maximum temperatures may reach the 60’s November 6 before a cold front moves through the state.

At this point in time, the GFS model is developing a powerful storm system November 14-15 as an upper air trough pushes eastward across the central and northern Rockies. The main upper air low is forecast to move into the eastern Dakota’s November 14 and heavy snowfall is possible across eastern Montana, northeastern Wyoming, the Dakota’s and western Minnesota. Currently, northeastern Nebraska is on the southern periphery of snow pattern currently forecast.

By November 15, the GFS model intensifies the northern Plains upper air low and pivots a piece of energy around its rear flank. It is this piece of energy that the GFS model indicates will build southward and increase the chances for accumulating snowfall across the northern half of the state. High temperatures will likely drop into the 20’s north to 30’s south. If the GFS model is correct, ranchers and producers should be aware that significant moisture is likely, including heavy snowfall accumulation (> 6 inches).

To add insult to injury, the GFS indicates another powerful upper air trough will move into the central United States November 19-20, which increases the potential for another significant snow event for the northern half of the High Plains region, which includes Nebraska. Since this is at the end of the model forecast period, confidence is low. However, as this past week has shown, it is possible to have to strong storm systems in close proximity to each other.

Bottom line, over the next 16 days, the best harvest activity weather will be November 2-9, before a stormy weather pattern appears to return to the central Plains. If the GFS storm activity currently forecast materializes, what crops still remain in the field may be a challenge to harvest after we reach mid-month.