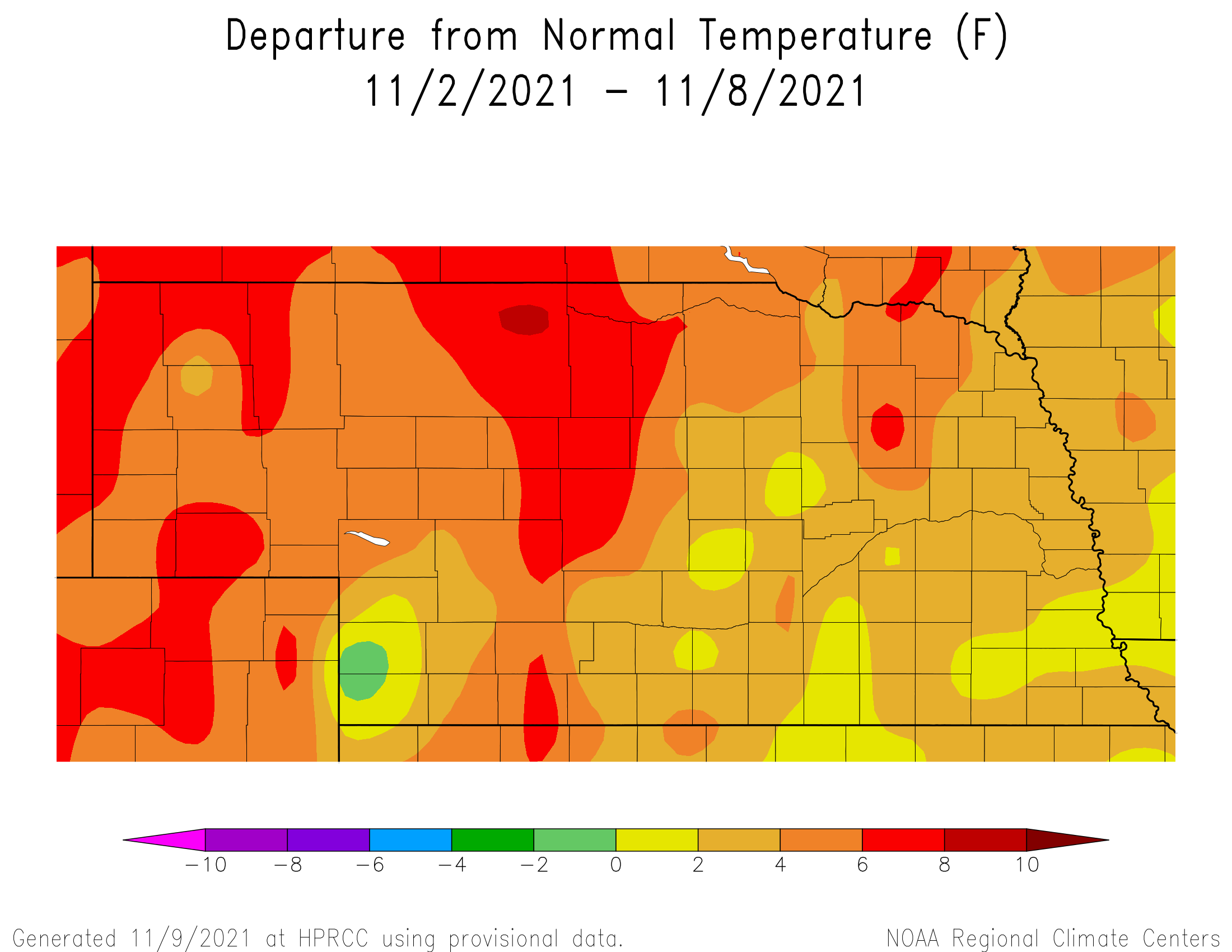 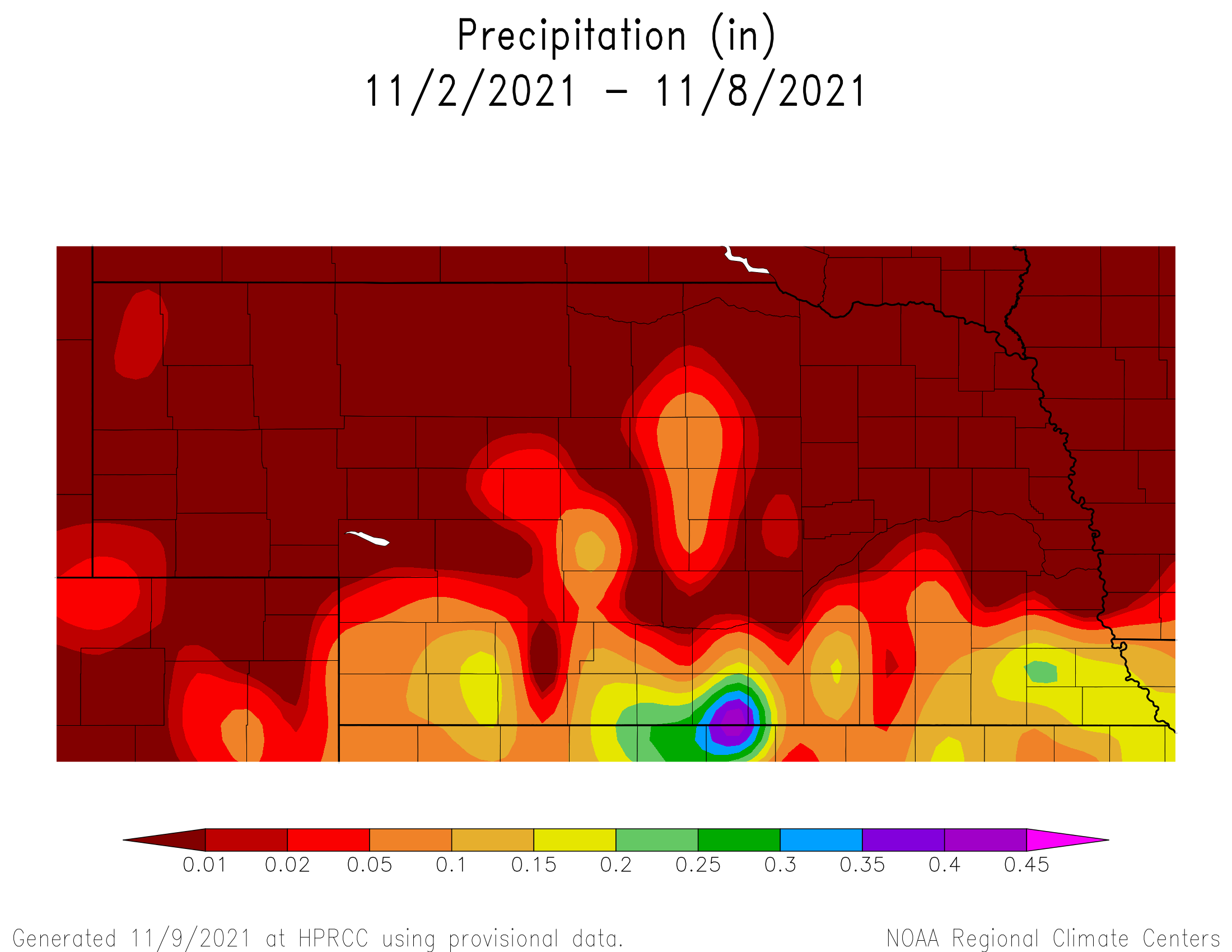 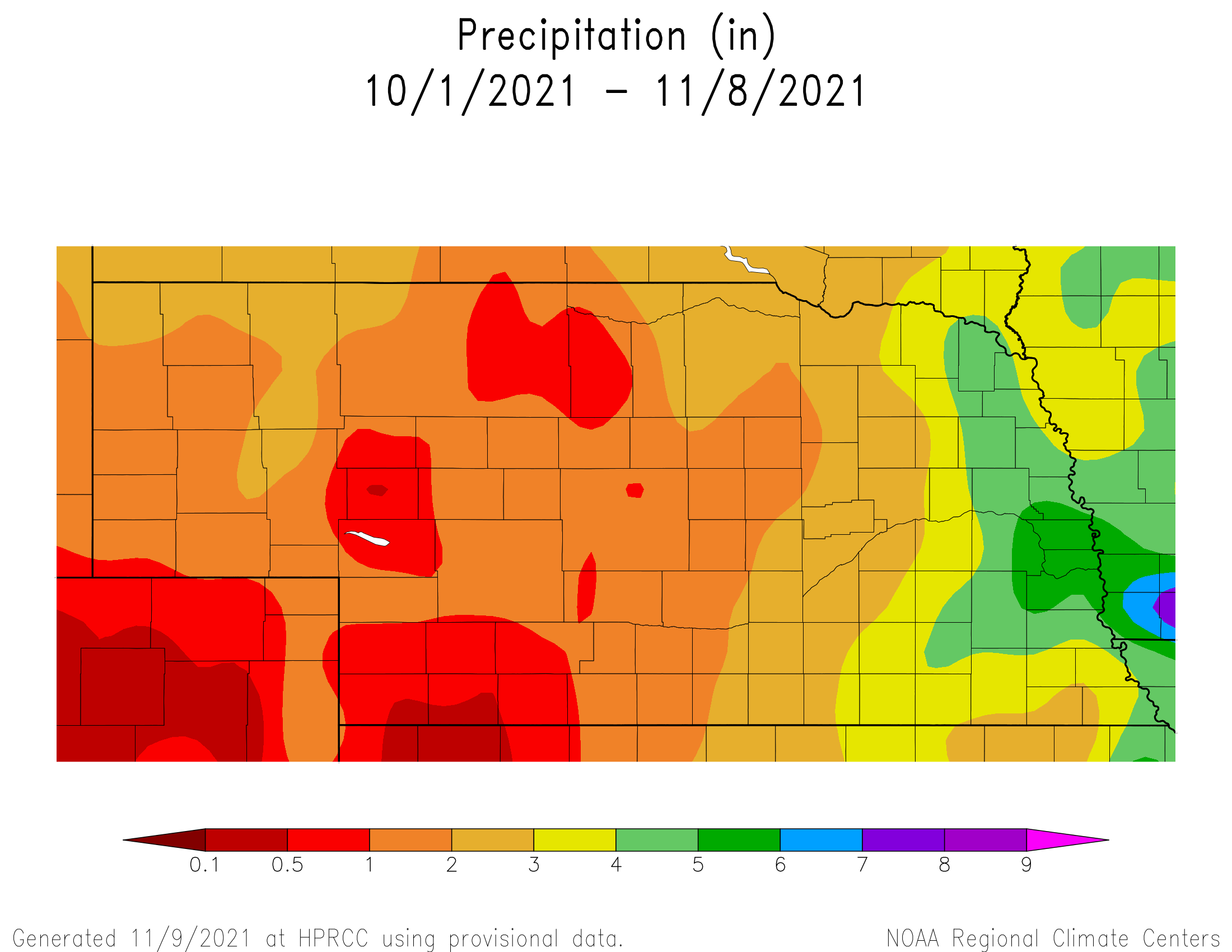 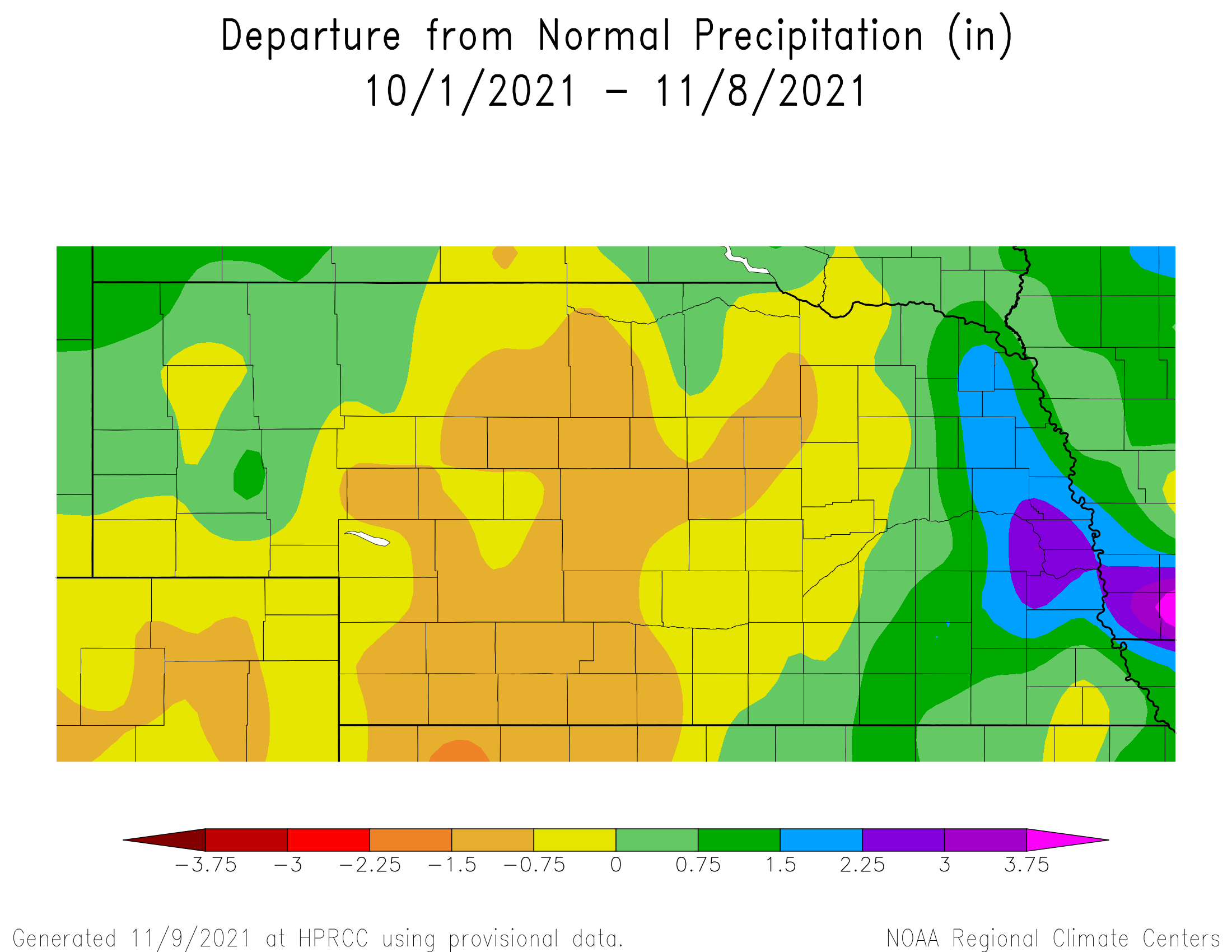 Most of the active weather this past week occurred right at the beginning of the period as a piece of energy rotated around a broad upper air trough located over the northern High Plains. Since the vast majority of moisture with this system occurred during the late afternoon of October 31 through midday November 1, surface air temperatures were cold enough to support accumulating snowfall.

A narrow band of moderate snowfall (3-6 inches) fell along the I-80 corridor from Sidney through Gothenburg. A lighter band of snowfall (Trace to 3 inches) fell approximately 30 miles north and south of I-80, with the eastward extent reaching the Grand Island, Hastings and York areas. Warmer air temperatures across eastern Nebraska resulted in light rainfall, particularly south of I-80.

It should be noted that areas of south central and southeast Nebraska have failed to reach minimum temperatures of 28 F or lower (hard freeze), but model guidance suggests that these areas will experience these conditions the morning of November 13th. In addition, even though Omaha and Lincoln officially reached hard freeze status at their airport locations, interior residential areas have yet to experience a hard freeze. A complete first fall frost (32 F or lower) and hard freeze (28 F or lower) summary story will be issued early next week when all Nebraska State Climate Office mesonet stations have hard freeze conditions.

Precipitation was virtually nonexistent statewide after the November 1-2 precipitation event. Some residual light shower activity was observed across extreme southeastern Nebraska November 3 as the backside of the precipitation shield associated with the upper air low pushed east-southeast into southwestern Iowa and northwestern Missouri. Less than a handful of stations reported trace to 0.02 inch totals November 4th and 5th, primarily due to heavy fog development across southern and central Nebraska. Cumulative precipitation totals for the November 1-8 period can be view in Figure 2.

Although last week’s precipitation across the southern Panhandle and west central Nebraska were beneficial, cumulative precipitation for the soil moisture recharge period (October – April) across the southern 2/3 of the western ½ of the state still remains in a deficit. Figure 3 depicts the reported liquid equivalent moisture that has fallen across the state since the beginning of October, while Figure 4 show where anomalous wet and dry areas exist within the state. A large area in the central 1/3 of the state has accumulated deficits of 0.75 inches or greater and will require a strong precipitation event short term dryness issues before soil surfaces freeze sufficiently to end potential precipitation infiltration into the surface soil layer.

Nebraska Agricultural Statistics Service (NASS) reported that there were 5.7 days of favorable fieldwork this past week, with most of the delays occurring November 1-2 with the snow/rain event along the I-80 corridor from the southern Panhandle through central Nebraska. According to NASS, the soybean harvest is nearly complete with 95% of the crop harvested as of November 7, which compares to 100% last year and the 5 year average of 96%. Most of the fields yet let to be harvested were in areas impacted by the heavy moisture the final week of October.

The corn harvest reached 82% complete according to NASS, which compares to 72% October 31st. Last year the corn harvest stood at 92% complete and the 5-year average is 78%. The sorghum harvest reached 85% complete, compared to 95% last year and the 5-year average of 80%. The difference between this year and last year’s rapid pace is that there was more storm activity this October when compared to last year.

Unfortunately, most of the surplus moisture received this fall across the state has occurred the northern1/4 and eastern 1/3 of the state. With hard freeze conditions averaging 2-3 weeks later than normal across the western ½ of Nebraska, grassland species were still transpiring and using fall moisture for growth. The recent string of hard freezes should push grasslands into dormancy and future precipitation events will have a greater impact on soil moisture recharge.

NASS reports that pastures and rangeland conditions as of November 7 were rated 13% very poor, 19% poor, 51% fair, 15% good and 2% excellent. In comparison to the October 31 crop report, the only changes were to decrease the poor category 2 percentage points, while increasing the fair and excellent categories 1 percentage points. In essence, pastures remain unchanged from the previous week even with the snow/rain event across the southern Panhandle and west central Nebraska.

Topsoil and subsoil moisture estimates showed a slight deterioration in conditions according to NASS, likely a result of the lack of measurable moisture across the northern and eastern 1/3 of the state. As of November 7th, topsoil moisture was rated 6% very short, 29% short, 63% adequate and 2% surplus. The largest movement came in the adequate (+3 percentage point change) and surplus ratings (-3 percentage point change).

An upper air trough crossing the northern Rockies on November 9th is forecast to strengthen once it moves into the northern High Plains on November 10th. Because of this systems rapid movement from the west coast into the central 1/3 of the United States, low level moisture from the Gulf of Mexico feeding northward ahead of the surface low will be slow to develop. Therefore, the eastern ¼ of Nebraska has the best opportunity for measureable moisture (0.25-0.75 inches) with totals dropping off to less than a tenth of an inch west of Grand Island.

As this upper air trough begins to strengthen and tap colder air over southern Canada, accumulating snowfall should develop over the eastern Dakota’s and Minnesota. The heaviest snow totals should be confined the eastern North Dakota and the northern half of Minnesota. However, because the system will slow down as it moves into the western Great Lakes region, there may be enough cold air at the surface across extreme northeast Nebraska for flurries or very light accumulations to develop on the second half of November 11th through the first half of November 12th.

High temperatures are forecast to drop from the upper 50’s to low 60’s November 9th into the low to mid 30’s November 11th. A gradual warming trend will develop across the southwest half of the state beginning November 12th in response to another trough moving into the Pacific Northwest. As this trough moves eastward, it will force a ridge of high pressure to expand over the central and southern Plains through November 17th. High temperatures are forecast to warm into the upper 40’s to low 50’s November 13-14, with mid 50’s to mid 60’s forecast November 15-16. The GFS model does depict a quick moving wave moving southeast through the upper Mississippi river valley November 13th, but precipitation is forecast to remain north and east of the state.

Another trough is forecast by the GFS model to move into the west central High Plains during the second half of November 17th through the first half of November 19th. Current GFS modeled precipitation with this system targets the western 1/3 of the state as the surface low is forecast to move northeast toward the northern Plains. The GFS model indicates the trough will intensify and pull cold air southward on its rear flank and direct it towards the central Plains. High temperatures are once again likely to fall into the upper 30’s to low 40’s. Any southward shift of this trough as it enters the central High Plains would bring precipitation further eastward toward central Nebraska.

Atmospheric ridging is forecast to develop from November 20-22 and maximum temperatures will slow warm back into the upper 40’s to mid 50’s by November 22. Another trough is forecast to into the central United States November 23-24, which is at the end of the 16 day GFS forecast period. However, this system does bear watching as a powerful storm develops according to the model somewhere in the central Plains.

On November 11th, this system was depicted to impact the central and northern Plains, with the November 12th solution showing it as a central Plains storm. If the GFS is correct on the amount of cold air available, then a widespread snow event and problematic travel issues would develop somewhere from the northern half of Kansas through the southern half of South Dakota.