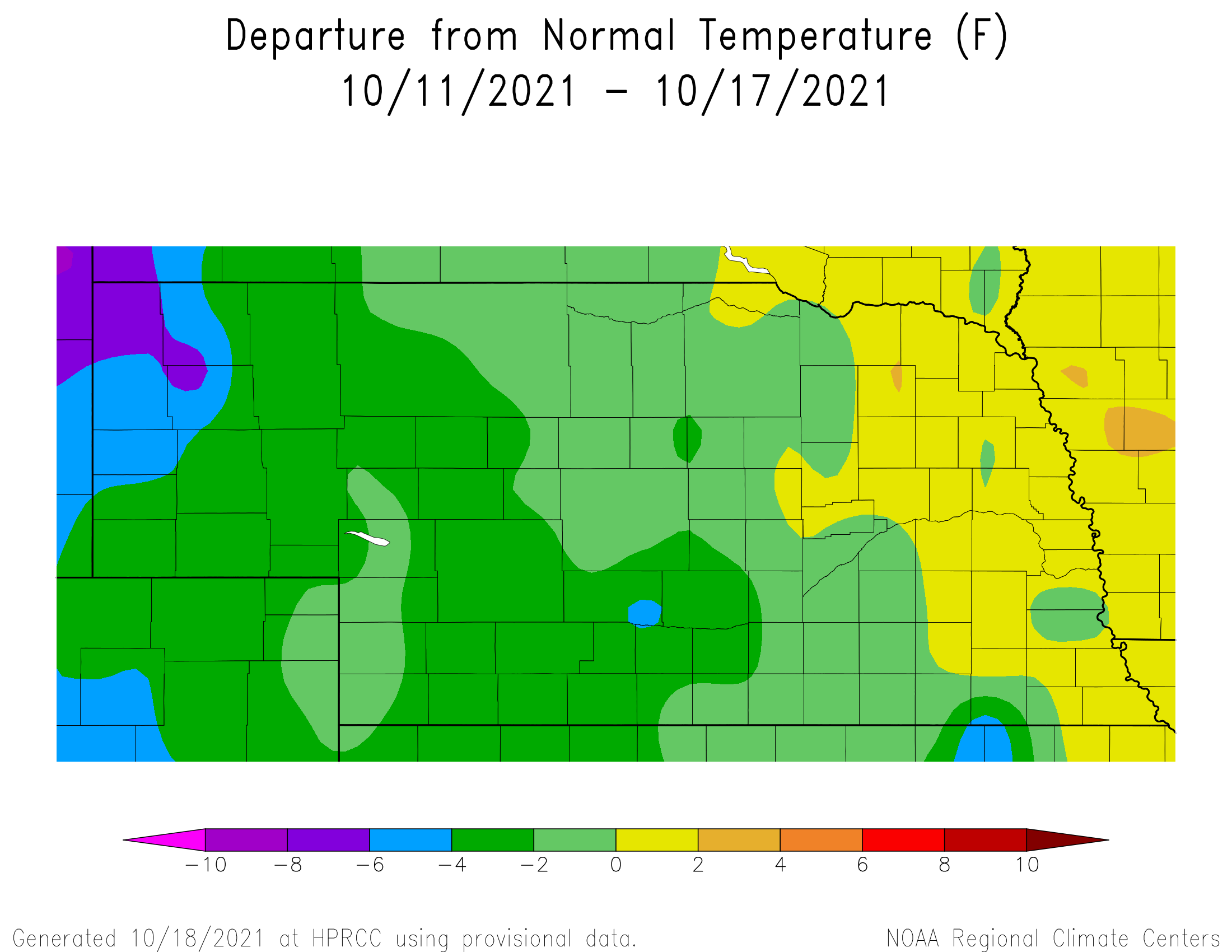 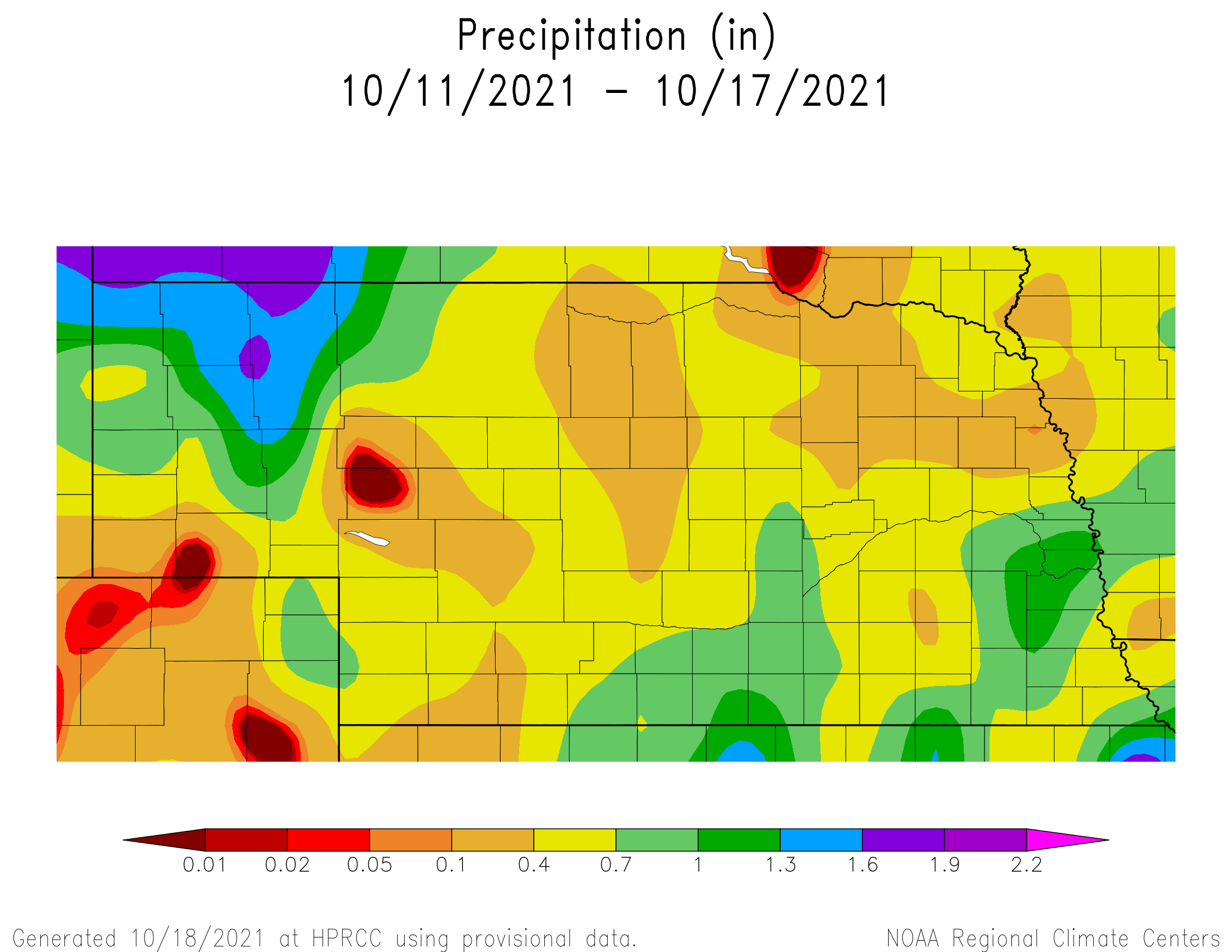 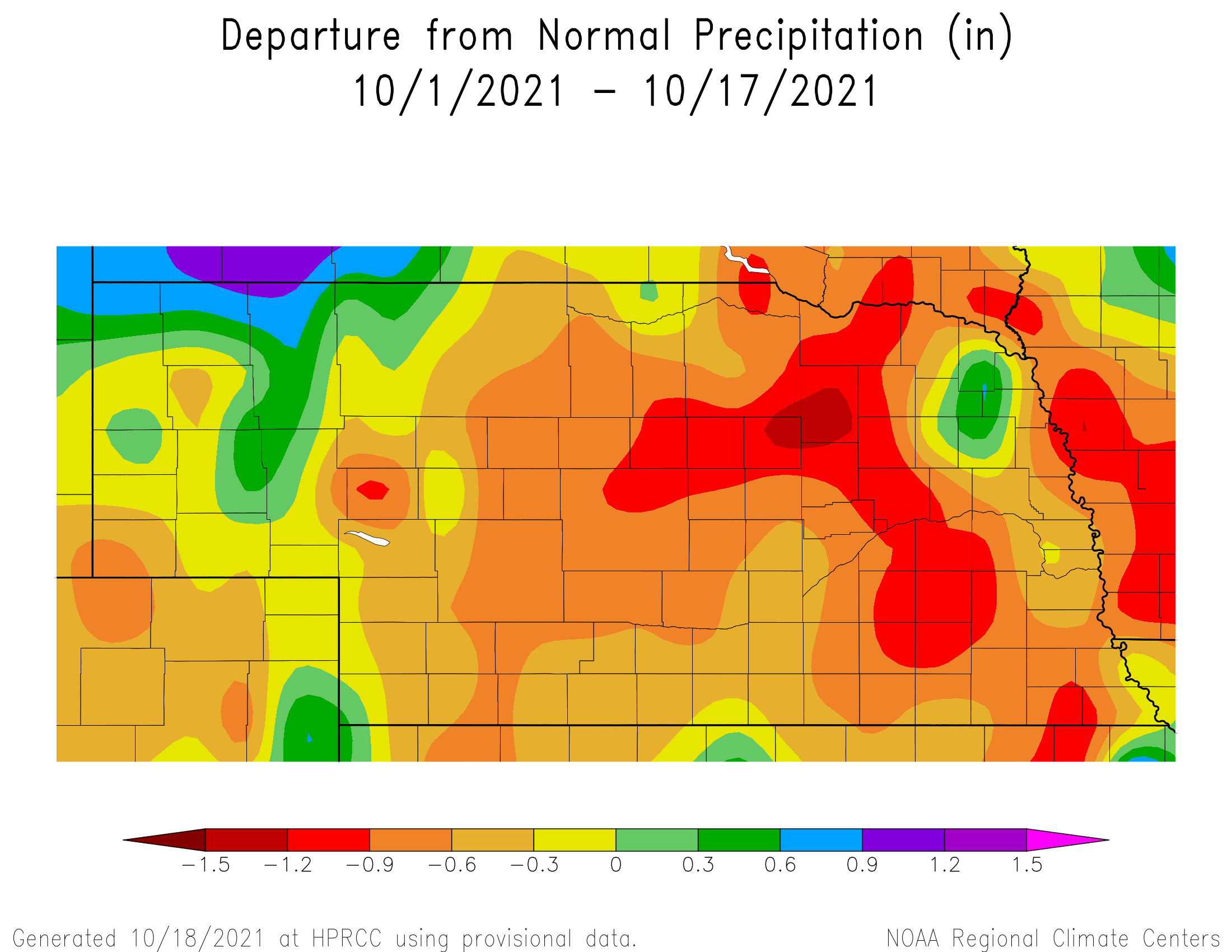 A strong upper air trough slowly moved across the country this past week and brought widespread moisture to Nebraska during the mid-week period. As the surface cold front pushed through the state October 12-13, maximum temperatures dropped into the 50’s west and 60’s east. Widespread hard freeze (28 F or lower) conditions were reported across the Panhandle and west central Nebraska, with frost and freeze conditions (29 F – 32 F) occurring west of a line from Norfolk to Hebron. Most of east central and southeast Nebraska had reports of scattered light frost with low temperatures in the 33-38 F range.

Although moisture was reported somewhere in the state 6 of the 7 days between October 11th and October 17, daily accumulated precipitation totals were generally light and widely scattered except from Tuesday evening October 12th through Thursday morning October 14th. Cumulative weekly precipitation (October 11-17) across the state can be viewed in Figure 2.

Precipitation on October 11th was confined to the southeast corner of Nebraska south of a line from Weeping Water to Chester and accumulation totals ranged from a trace to 0.40 inches. On October 12th, a weak wave ejected out of the central Rocky Mountain upper air trough bring light shower activity to northern Panhandle with most reporting locations receiving less than 0.25 inches of moisture.

Significant moisture fell statewide on October 13th with general coverage across the state ranging from 0.25 to 0.75 inches. This was the first statewide precipitation event for the month of October and pockets of one to two inches of moisture were reported across the southeast and northern Panhandle, as well as parts of south central and east central Nebraska. Trace amounts of moisture were observed in small pockets of northeast and southeast Nebraska. The northeast pocket received 0.10 to 0.25 inches of moisture on October 14th as the upper air trough moved northeast of Nebraska.

According to the Nebraska Agricultural Statistics Service (NASS), as of October 17 Nebraska producers had harvested 76% of the soybean crop, compared to 60% a week prior. Last year 91% of the crop had been harvested by this time, while the 5-year average stands at 58 percent. The difference in harvest activity pace between this year and last year boils down to the weather delays experienced this past week. If there had been no weather delays, estimated harvest progress would have been in the 85-90% range.

Corn producers had harvested 41% of the state crop as of October 17th compared to 55% last year and the 5-year average 33 percent. The sorghum harvest picked up steam and stood at 58%, which compares to 56% last year and the 5-year average of 38 percent. With dry conditions expected to dominate the southern 2/3 of the state through this coming weekend, statewide corn and sorghum harvest numbers should gain an additional 15-20 percent in the October 24th NASS weekly crop report.

Although rainfall was very welcome this past week, it was insufficient to significantly impact sub-soil moisture recharge (soil depths below 1 foot). NASS reports that 12% of the subsoil statewide on October 17th was very short, 41% short, 46% adequate and 1% surplus. Topsoil moisture ratings by NASS were 8% very short, 32% short, 59% adequate and 1% surplus. Topsoil improvements were greatest across the northern and southeastern Panhandle, as well as south central and extreme east central Nebraska. Pasture condition rankings showed little movement this past week due to the lag time for grass growth to initiate after a precipitation event. NASS indicates that 13% of the pastures are rated very poor, 17% poor, 55% fair, 14% good and 1% excellent.

The GFS model issued the morning of October 19th indicates that a series of troughs will move across the nation’s midsection over the next two weeks. Even after last week’s precipitation event, October precipitation has been below normal across most of western and eastern Nebraska (Figure 3). This is important as October moisture normally accounts for over 50% of our fall precipitation and is the largest contributing month for subsoil moisture recharge until we reach April.

Although the GFS does indicate that the potential of additional moisture this month does exist, none of the currently depicted upper air troughs generate enough moisture to reach normal moisture the final 13 days of the month to guarantee normal October moisture, let alone eliminate the moisture deficits that have currently accumulated. However, the trend of systems moving across the central Plains is more robust than last fall, but moisture available in the lower atmosphere for precipitation generation doesn’t currently appear to be very strong.

Four short wave troughs are currently depicted by the GFS model to cross the central and northern Plains before the end of October. The first wave is forecast to move across South Dakota October 20th and generate precipitation across South Dakota, with the northern ¼ of the state predicted to be on the southern flank of the precipitation shield. Current moisture with this system is expected to be less than 0.25 inches unless some convection can develop. However, this trough will pull cooler air into the state, with high temperatures returning to the 60’s October 20-22.

High temperatures should warm up into the 70’s October 23-24 under high pressure aloft, then attention turns to the next upper air trough forecast to cross the state during the latter half of October 24th into the daytime hours of October 25th. The quick movement of this upper air trough will limit return moisture from the Gulf of Mexico ahead of the trough. The GFS model indicates that precipitation development will occur across the eastern ¼ of the state and intensify over Iowa. Moisture is predicted to be sparse to non-existent for the western ¾ of the state.

After a very brief lull in storm activity October 26-27 under high pressure aloft, a strong trough is forecast to move across the central Plains during the overnight hours of October 27 through October 28th. Currently the GFS model hints that the eastern ½ of the state has the highest odds for accumulating moisture and the potential for some thunderstorm development. At present, there doesn’t appear to be enough cold air behind the system to generate season ending freezing temperatures for areas that have failed to reach hard freeze conditions (low temperatures 28 F or lower).

After another 2 day lull with high temperatures reaching the 60’s, potentially the lower 70’s across western Nebraska, another strong trough is forecast by the GFS model to move across the northern Plains. At present, precipitation with this system is focused on the northern Panhandle and north central Nebraska, as well as the Dakota’s. Most of the remainder of the state is depicted as precipitation free currently, but the cold air that spills in behind the trough is currently depicted as strong enough to produce hard freeze conditions across the eastern half of the state.

Finally, as the calendar turns to the month of November, another trough is forecast to cross the northern Plains. Since this feature occurs at the end of the 16 day GFS forecast period, confidence in timing and placement of the trough is low. That being said, the GFS model moves this system from the Pacific Northwest to the northern Plains from October 31 to November 2 leaving Nebraska south of the forecasted precipitation shield. In addition, colder air is forecast to remain north of the state and high temperatures across Nebraska would remain in the 60’s.