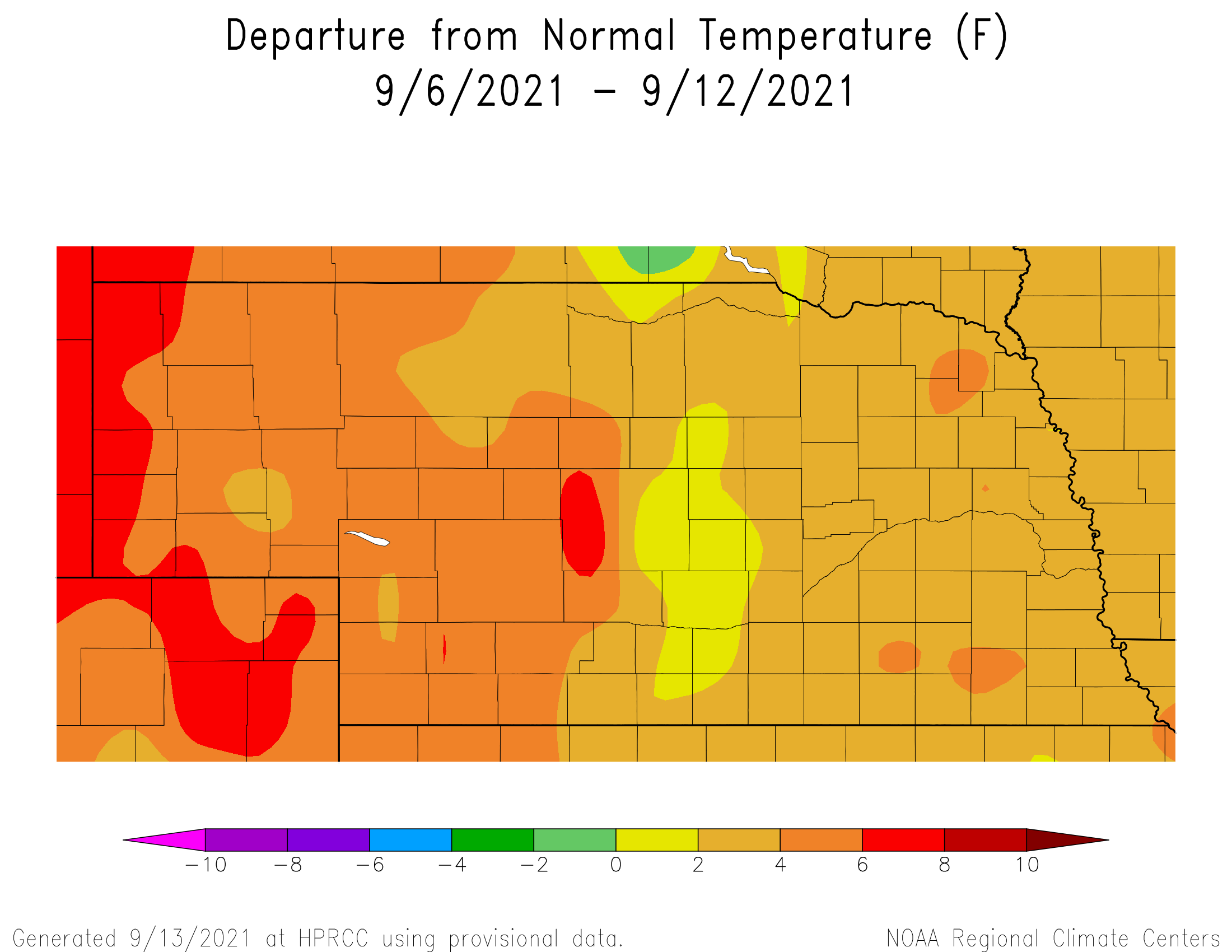 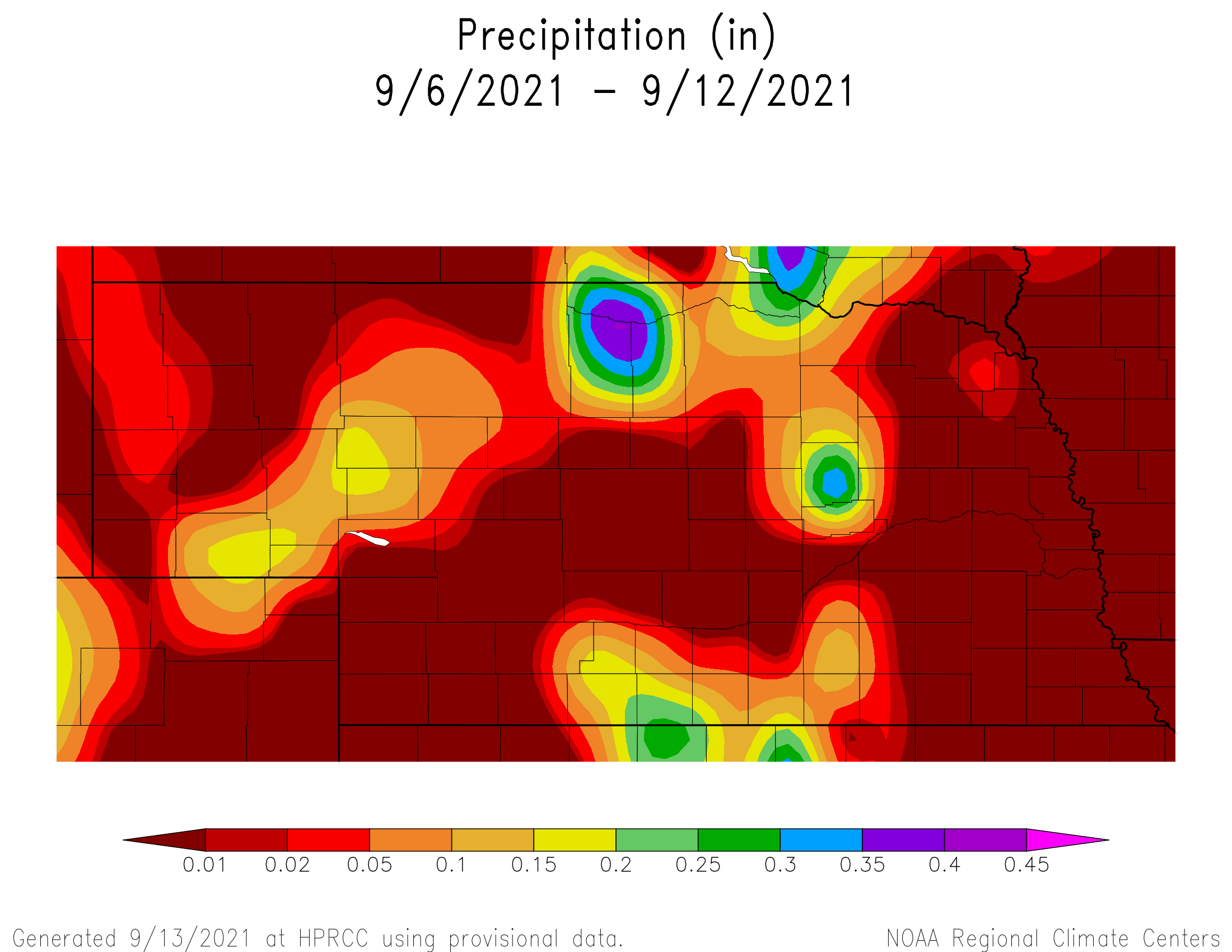 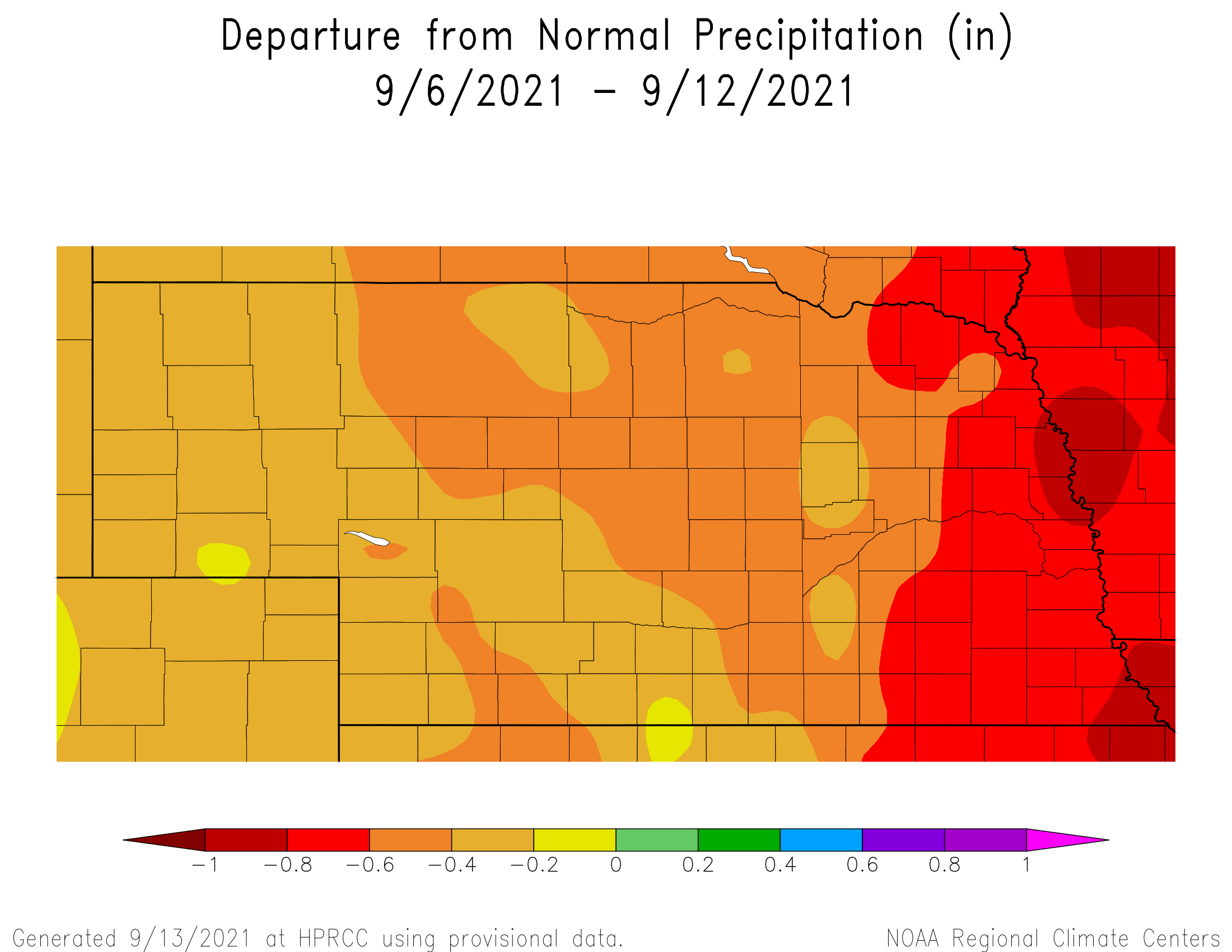 After a relatively wet period across Nebraska the last full week of August and first full week of September, a significantly drier pattern developed across the state last week. An upper air trough crossed the northern Plains early last week and slowly moved toward the Great Lakes as the week progressed. The base of this upper air trough pushed toward the southern Nebraska border and allowed cool Canadian air push southward bringing temporary relief from hot and humid conditions that developed ahead of the upper air troughs passage.

With such a dry air mass in place, precipitation events were sparse and focused primarily across the northwestern ½ of Nebraska. Most of the precipitation that developed was along the boundary between the western upper air ridge and the upper air trough sliding toward the Great Lakes region. Atmospheric moisture that fueled this precipitation was monsoonal in origin instead of from southerly winds advecting low level Gulf of Mexico moisture northward.

The two heaviest precipitation reports during the past week were 0.90 inches southwest of North Platte on the 8th and 0.51 inches southwest of Sidney on the 12th. The North Platte precipitation event was from a single thunderstorm cell that quickly developed and dissipated, while the Gordon event was associated with the most widespread precipitation event that occurred across the state last week. Precipitation developed the evening of September 11th through the morning of September 12th and dropped 0.10 to 0.25 inches of moisture across the eastern half of the Panhandle. This precipitation quickly dropped off to less than 0.10 inches across west central and north central Nebraska.

Figure 1 shows the distribution of precipitation September 6-12 and readers should be cautioned that graphical representation of accumulated moisture is likely overstating areal coverage due to the sparsity of stations across western Nebraska. More importantly, Figure 3 shows that precipitation was below normal and widespread across the state. Only 2 small areas were close to normal, near Sidney and Harlan County Reservoir. Maximum daily precipitation totals gathered from the NERain observers are as follows: September 6 (Harvard – 0.48), September 7 (Statewide – 0.00), September 8 (North Platte 16 SSW - 0.90), September 9 (Statewide -0.00), September 10 (0.00 – Statewide), September 11 (Chappell 5 NE – 0.24), September 12 (Sidney 13 WSW – 0.51).

The lack of widespread moisture last week led to soil moisture condition rating declines according to the Nebraska Agricultural Statistics Service (NASS). Since pastures remove stored soil moisture from the top foot of profile first in order to meet evapotranspiration demands, it not surprising that ratings declines occurred given that maximum temperatures moved into the 90’s or higher during the second half of last week and precipitation was below normal.

Pasture ratings improved across the state, even as hot and dry condition developed across the state last week. This is not surprising given the fact that it will take a minimum of several days for forages to initiate growth sufficient for NASS contributors to report improvements. As of September 12, NASS reports pasture conditions at 12% very poor, 18% poor, 51% fair, 17% good and 2% excellent. Compared to conditions on September 5th, the largest changes occurred in the good category which gained 11 percentage points and the good category which decreased 6 percentage points.

Warm season crops are rapidly approaching the finish line and NASS reports that 35% of the corn and 27% of the sorghum crop was mature. Soybean maturity as measured by leaf drop was at 47%. One year ago corn was 45% mature, sorghum 24% mature and soybean leaf drop stood at 58 percent. Initial harvest activity has begun and NASS reports 2% of the sorghum crop has been harvested, while corn and soybeans stood at 1% harvested as of September 12th.

Winter wheat seeding for the 2022 crop is underway across Nebraska and NASS reports that 17% of the crop has been seeded compared to 8% last year and the 5-year average of 13 percent. Across the panhandle, the dry bean harvest stood at 34% which is ahead of last year’s pace of 26%. NASS did not provide a 5-year harvest comparison number for dry beans.

The jet stream pattern over the next 16 days according to the morning run of the GFS model issued September 14th indicates that above normal temperatures are expected from September 15th through September 20th as the western United States upper air ridge pushes eastward across the central and northern Plains. As the backside of the ridge moves across Nebraska on September 20th, a strong upper air trough is projected to move across the northern Plains and break the anomalous streak of hot temperatures.

The GFS model indicates that the first of three upper air troughs will move into the northern half of the central Plains region and quickly intensify as moves toward the western Great Lakes. Cold air on the backside of this first trough could drop maximum temperatures at least 20 degrees on the 21st, then rebound 10 degrees on the 22nd before the next trough moves into the region on the 23rd. If the GFS is correct, high temperatures will drop 10 to 15 F on the 24th and potentially another 10 F on the 25th. High temperatures will slowly rise through the 27th before another upper air trough crosses the northern Plains on the 28th. The GFS model keeps the coldest air north of Nebraska and the GFS model indicates that temperatures may drop below freezing across northeastern North Dakota through the western 1/3 of the upper peninsula of Michigan.

High temperatures from September 15th are forecast to range from the low 80’s east to the low 90’s west, warming into the upper 80’s to middle 90’s west September 16-20. If enough dry air is in place, it is possible that portions of the Panhandle and southwest could flirt with the 100 F mark, especially the 18th through the 20th. On September 21, a strong cold front is forecast to move through the state dropping high temperatures into upper 50’s northwest. High temperatures across southeast Nebraska are expected to reach the middle to upper 80’s as the cold front is not forecast to clear this region prior to sunset.

The cold air with this upper air trough is forecast to quickly shift toward the east as another short wave begins to develop over the northern Rockies. High temperatures will cool into the upper 50’s northeast, but begin to rebound into the upper 60’s across the western 1/3 of the state on September 22nd. The GFS suggest that measurable precipitation is most likely across the eastern ½ of the state on the 22nd, but based upon the forecasted strength of the upper air trough there may be more broad based precipitation coverage across the state than currently projected by the GFS model.

The final two days in the current GFS model run suggest an upper air ridge will build across the central Plains in response to a strong upper air trough moving into the Pacific Northwest. As the trough deepens is will force the western U.S. upper air ridge east and northward resulting in dry conditions statewide and high temperatures rebounding back into the 80’s. Based upon the speed of troughs moving from the Pacific Northwest into the northern Plains that past few weeks, dry and warm conditions are likely through October 5th.

Due to the author being in Michigan, the next Agricultural Weather Update will not be issued until October 1, 2021.