Fact check: January not as cold or wet as it seemed

The southeast corner of Nebraska hit the snow jackpot this season, after January continued the trend of substantial snowfall amounts across the state. A storm at mid-month resulted in impressive daily snowfall totals of more than 6 inches in certain locations. While the rest of the state received only a few inches of snow for the entire month, places like Nebraska City (20 inches), Tecumseh (18 inches), Syracuse (16.6 inches), Auburn (15.5 inches), the Lincoln area (14 inches) and Omaha Eppley Airfield (12.8 inches) saw copious amounts. For the season-to-date total (since Oct. 1), this portion of Nebraska has seen 2 to 3 feet of snow.

Precipitation was well below normal elsewhere around Nebraska as 50 percent to as little as 5 percent of normal was received during January. This equates to monthly totals of three-tenths to less than a hundredth of an inch. For the state as a whole, precipitation (0.23 inches) ranked about a quarter inch less than average.

Believe it or not, aside from a few cool pockets in north-central, southeast and south-central Nebraska, temperatures averaged a bit above average statewide. The relative warmth was particularly strong for portions of the northern Panhandle. Warm spells early and late in the month caused temperatures to rise into the mid 60s for the southern tier of the state. The northeast, however, didn’t make it out of the upper 40s. Also early and late in the month were below-zero temperatures, and double digits below zero for eastern portions of Nebraska. The lowest observed temperature was -23 at Concord on Oct. 30. The Nebraska Mesonet station near Concord reported a wind chill temperature of -42 also on this date. As this storm passed through, it resulted in a 61 mph wind guest at the Naper Mesonet site.

The statewide monthly average temperature was 26.3°F, which is 1.3 degrees above average.

Soils at the 4-inch depth remain below freezing for much of the state. The coldest temperatures are in the northeast, where the weekly average bare soil temperature is 25 degrees. The lowest reading of 3°F during the month was observed at the Fordyce Mesonet station. Surface moisture continues to be a concern for areas of the state that have experienced significant precipitation during the fall and winter.  Although the recent cold weather has allowed frost to reform in the top foot of the profile across southern Nebraska, frequent warm-ups continue to thaw and mud up.  The combination of frequent muddy surfaces and an active storm track, late winter and early spring calving may be more difficult than normal.

Abnormally dry conditions were introduced into the U.S. Drought Monitor depiction of the southern Panhandle. This dryness pocket extends into northeast Colorado and extreme southwest Wyoming.  Long-term dryness across the Panhandle dates back to late summer.  Six-month Standardized Precipitation Index (SPI) values are just shy of D1 status.  Late October and early November storm activity events are the only significant moisture events this region has experienced since fall harvest began.  Storm activity will need to increase dramatically to offset moisture short falls experienced off and on since late last summer. 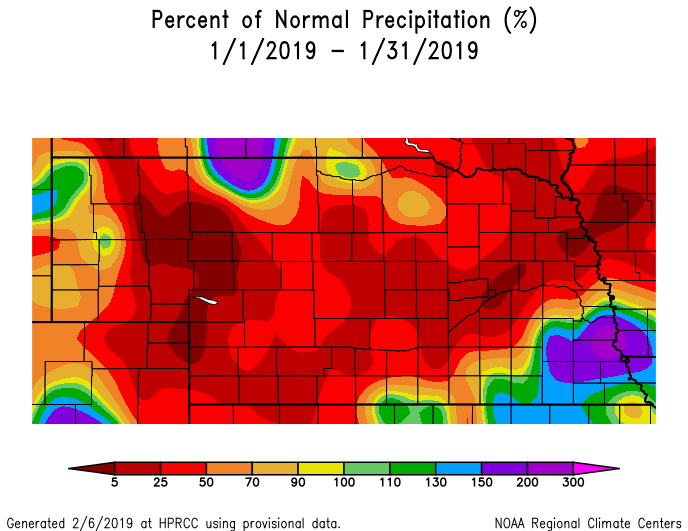 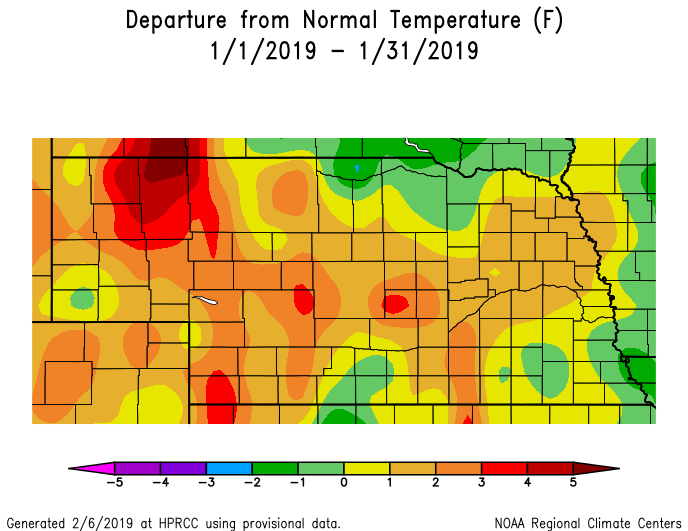 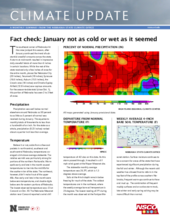