Temps well below zero & a blizzard kick off 2018

Temperatures were well below normal during the first week of the New Year, with temperatures breaking records in some parts of the state. Toward the end of the month, a blizzard crossed Nebraska, dropping 8- to 14-inches in some locations. Despite the widespread snow, abnormal dryness lingered for much of the state. Read more about what January's climate conditions meant for Nebraskans in this month's edition of the Climate Update. 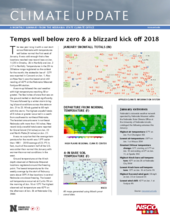